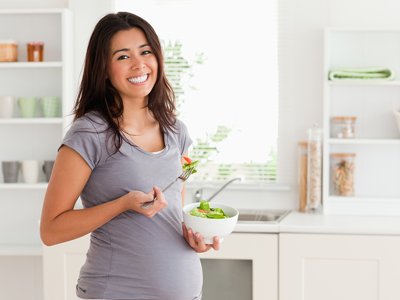 Everyone knows the expression “eating for two.” Although it’s often used as an excuse to double one’s caloric intake, it is really a reminder that you should strive for a well-balanced, nutritious diet during pregnancy. Usually, this doesn’t come up until your first appointment with your obstetrician to confirm conception when matters such as eating well, taking prenatal vitamins, and what foods are to be avoided are discussed. But now it seems we should be having these kinds of conversations before we even start trying to become pregnant. According to new research, nutrition and a woman’s diet just prior to and at the time of conception may have a permanent effect on the DNA of her child.

The study, which was a joint venture between the London School of Hygiene and Tropical Medicine in the United Kingdom and Baylor College of Medicine in Houston, Texas, found that the regulation of certain genes and whether they are silent or expressed can be influenced greatly by what a mother consumes around the time of conception.1 Briggs, Helen. “Pre-pregnancy diet ‘permanently influences baby’s DNA’.” BBC News. 29 April 2014. Accessed 5 May 2014. http://www.bbc.com/news/health-27211153 The subjects were 166 pregnant women living in 34 villages across rural areas of Gambia. The scientists chose this location for the experiment because there are climate extremes creating a rainy season and a dry season. Since the residents eat predominantly locally grown foods, this results in major dietary variations depending on what time of year it is.

Therefore, roughly half of the participants were selected because their pregnancies began during the height of the rainy season, while the other half began theirs in the midst of the dry season. Blood samples were drawn from each of the volunteers soon after conception to measure their levels of a variety of nutrients. Later, when their infants were between two and eight months old, their DNA samples were collected and six specific genes were evaluated.

The babies who had been conceived during the rainy season were found to have consistently higher rates of methylation in all of the genetic material analyzed than did the babies conceived during the dry season. Methylation is one type of epigenetic effect, which is an alteration in the DNA that serves to either turn a gene on or silence it. In the case of methylation, the modification occurs as methyl group compounds become attached to the DNA at a very early point in embryonic development.

Epigenetic effects have been proven in research on mice, including a 1994 study at the Stanford University School of Medicine in California on how variations in a mouse’s diet during pregnancy can mean the difference in both obesity risk and the color of the fur of its offspring.2 Duhl, DM; et al. “Neomorphic agouti mutations in obese yellow mice.” Nature Genetics. September 1994. Accessed 7 May 2014. http://www.nature.com/ng/journal/v8/n1/abs/ng0994-59.html The current study appears to add to the evidence that a similar kind of epigenetic effect takes place that permanently influences a human child’s DNA–involving virtually all of the developing cells of the body–based on what the mother consumes around the time of conception. The scientists were able to associate the level of particular nutrients present in the mother’s blood sample with the rates of methylation. However, what the trial did not determine was exactly what aspect of the genetic material might be influenced. Therefore, we do not know if the impact of the effects is significant or not, but if they follow the lead of the mice experiments, the results could be profound not only for appearance but also for health.

At any rate, it now seems that both parents-to-be have the opportunity to improve their fertility rates and have the healthiest baby possible by making optimal choices in diet as well as lifestyle prior to conception. Several years ago, Jon Barron wrote an article with lots of valuable information on nutrition and supplementation before, during, and after pregnancy. It would seem that research now backs up his concerns regarding parental nutrition at all of phases of a child’s development–even before conception.