There is a selective role for natural supplements of all kinds as you move through the pregnancy process — preparing to get pregnant, getting pregnant, while pregnant, while breastfeeding, for infants, and for children up to about the age of 14.

So, without further ado:

Preparing to get pregnant

This is your normal supplementation period. This is the time to maximize the health of both the mother and father. We’re not just talking about optimizing fertility—although, to be sure, sperm quality and quantity are highly susceptible to dietary and environmental changes. There are a number of issues that need to be addressed beforehand because you may not have time after pregnancy, and for some things (such as detoxes), you absolutely should not do them after you are pregnant. The time before you get pregnant is the time to run your full detoxes, to balance your hormones, and to optimize your nutrition levels.

The need for detoxing

There are many reasons for detoxing before getting pregnant. Let’s deal with just a couple to give you an idea as to why it’s so important.

The idea is very simple. Before getting pregnant, you want to clean out as much toxic waste from the body as possible. Not just heavy metals, but all waste, including: drug residues, PCBs, xenoestrogens, etc. And, as you’ll learn shortly, once pregnant, detoxing is no longer an option—so do it before. You will want to run through the whole gamut of detoxes if possible.

It’s also important to balance hormones before getting pregnant. In fact, the ability of women to even get pregnant can be greatly affected by hormonal imbalances—particularly estrogen dominance. Specifically, estrogen dominance can lead to uterine fibroids, endometriosis, and ovarian cysts—all of which can compromise the ability of women to conceive. The only natural balancer for excessive estrogen in the body is natural progesterone.

Doctors may not use natural progesterone to treat infertility, but women are doing it nonetheless—and getting results. Note: if desired, you can always test your progesterone levels.

The importance of a healthy diet cannot be overstated. To function properly, the reproductive system requires proper vitamin and mineral support. Nutritional deficiencies can impair hormone function, inhibit sperm production, and contribute to the production of abnormal sperm. In preparation for getting pregnant, both men and women need to optimize their nutrition levels. Here’s a good guide as to what to look for: www.jonbarron.org/enzymes/newsletter-part-2-dietary-supplements. Specifically, though, to give you a sense of why nutrition plays such a key role in getting pregnant—for both men and women—let’s take a quick look at the role some specific nutrients play.

Everything that we’ve already covered on preparing to get pregnant applies to actually getting pregnant. In addition:

PCOS (polycystic ovary syndrome) is the most common cause of female infertility. Current research suggests that PCOS results from a failure to use insulin properly. This causes insulin levels to rise. The high insulin levels, in turn, cause a variety of other effects such as high blood pressure, hardening of the arteries, and high triglyceride levels. Insulin also appears to have an effect on the ovaries, causing them to produce high levels of testosterone and similar compounds which halt egg maturation and interfere with the menstrual cycle. The solution lies not in reducing testosterone levels, but in improving insulin utilization.

Studies have shown that a special natural form of inositol known as d-chiro-inositol can effectively help with insulin resistance. It is found in legumes and especially in buckwheat. Consumption of buckwheat protein extract appears to reduce excessively high blood sugar levels and reduce the excretion of d-chiro-inositol in diabetic rats. In addition, the use of Cinnulin, a cinnamon extract, has also been proven effective in helping reduce insulin resistance.

When it comes to supplementation while pregnant, there are really three very distinct areas of concern:

Again, basic nutrients are essential. In particular, though, certain deficiencies are common among pregnant women.

Animal studies show that vitamin A deficiency during pregnancy has produced newborn animals with no eyes, eye defects, cleft palates, kidney problems, undescended testes, and diaphragmatic hernias —to name just some of the problems. As we discussed earlier, beta-carotene is a vitamin A precursor and is perfectly safe. Dosages of beta-carotene as high as 10-15 mg are hardly extreme. And make sure you use naturally sourced beta-carotene, not the synthetic kind made from acetylene gas that’s used in most supplements..

Calcium deficiencies during pregnancy can affect the growth of the skeletal system, lead to hypertension, and affect fetal growth and weight. However, calcium supplementation is less important than calcium utilization.

Yes, it is necessary to avoid certain nutrients, herbs, and foods during pregnancy.

Depression after pregnancy is called postpartum or peripartum depression and is most likely triggered by hormonal changes. During pregnancy, the amount of progesterone in the body (aka the “feel good hormone”) increases greatly. In the first 24 hours after childbirth, the amount of progesterone plummets back down to normal non-pregnant levels. In many women, this can trigger a profound depression—particularly in anyone already prone to bouts of depression. Using an all natural progesterone crème to help restore levels so that they can be backed down more slowly can literally be life saving.

Supplementation with essential fatty acids not only helps with overall health, it also helps relieve depression and improves the health benefits of the breast milk for the baby. As for the best source of Omega-3’s, check out my recommendations.

According to the La Leche League, “In Italy, mothers are often told not to eat garlic, cauliflower, lentils, and red peppers. In India, most mothers eat all these things and breastfeed very happily. Actually, in parts of India, they believe that garlic helps a mother to breastfeed successfully.” In fact, there are even some studies that showed that babies prefer the taste of garlicky milk, remain attached to the breast for longer periods and consume more garlic-flavored than “plain” milk.

But taste isn’t the prime issue here. The fact is that garlic has pronounced antibacterial and antiviral properties— and it transfers that protection to the breastfeeding baby.

Fenugreek and blessed thistle can increase breast milk, whereas other herbs, such as sage, can reduce a mother’s milk supply. For a complete list, check out.

If you are breastfeeding, most nutritional needs will be met by the breast milk. Add a little exposure to the sun every day for vitamin D and the baby’s requirements are covered. Breast milk really is the perfect food for infants. 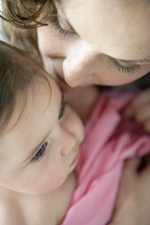 Stay away from soy formulas. Not only are the phytoestrogens too strong for infants, but unfermented soy is high in phytates, which block the absorption of essential minerals. Dairy formulas are not much better—being highly allergenic. Unfortunately, throughout most of the world, governments tend to mandate that infant formulas be based on cows’ milk protein, hydrolysed dairy protein, or soy protein. And virtually all infant formulas are pumped with synthetic vitamins.

Goat’s milk formulas are better in that the protein levels are much closer to that found in human breast milk, but goat’s milk also tends to have the same allergens and the same levels of lactose. And government regulators do not endorse it. Until such time as someone comes out with a hypoallergenic baby formula that is supplemented with natural vitamins and minerals, breastfeeding is far and away the best way to go.

Note: If one of the baby formula companies doesn’t take on a proper formula project sometime soon, I may have to add it to my project list and just do it myself.

In special circumstances, infants can use small amounts of supplements such as:

In all cases, though, work with your pediatrician.

And supplements for children up to about the age of 14 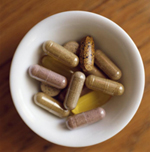 Children eat the same diets adults do—maybe even worse when they start hanging out with their friends. In addition, once they go to school, they are exposed to far more bacteria and viruses to which they have no developed immunity. That means the need for nutritional support is at least as great as for adults. Certainly this would include:

Let’s be perfectly clear here. Sugar flavored, artificially colored, synthetic vitamins are not what we’re talking about here. All of the rules for quality supplements apply equally when it comes to children’s supplements. With basic support like we’re talking about above, dosage is not much of a factor. These are essentially foods, not synthetic isolates. It’s hard to overdose. However, if you want a rule of thumb to use as a guideline:

In addition, make sure the child gets plenty of water soluble fiber in their diet to maintain regularity and plenty of omega-3 fatty acids to counterbalance excessive omega-6 fatty acids that are abundant in most fast foods nowadays.

Anything beyond that such as pathogen destroyers, colon corrective formulas, detoxing, etc. should only be used with a pediatrician’s approval and guidance. When you think about it, though, with so many children being put on ADD drugs, bipolar drugs, and whatnot, it’s hard to think of natural nutritional supplements as being any kind of major health threat.

Children are exposed to all of the same xenoestrogens that adults are, in approximately the same amounts—and with far less body mass to accommodate them. That means they present an even bigger problem for children than for adults. It’s one of the prime reasons that puberty for young girls has dropped from an average age of 15-16 to as young as 8-9. Although, I’m not a huge fan of soy in large quantities, fermented soy (such as tempeh and miso) in moderate amounts actually makes some sense and is likely cancer protective. Also, if young girls or boys show signs of estrogen dominance, several symptoms can occur:

You might want to talk to your pediatrician about using a small amount of a women’s or men’s natural progesterone crème.

As you can see, there is a selective role for natural supplements of all kinds as you move through the pregnancy process.

Just use common sense and work with your pediatrician.