Have Fish with Those Vegetables 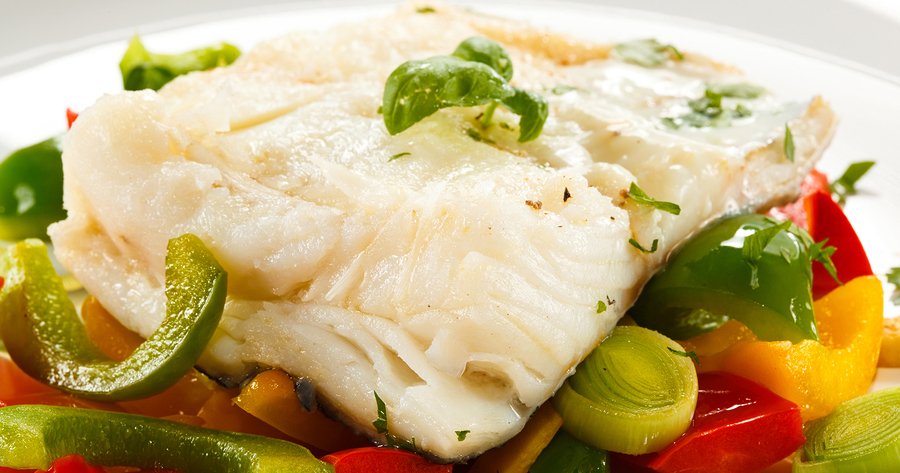 Instead of jumping on every diet fad that comes along, it’s generally much better to adopt a system of eating that is known to be nutritious and healthful, then stick with it for the long term. One such possibility is becoming a vegetarian and giving up all meat. And now new research suggests that one form of vegetarianism (pescetarianism, actually) that includes eating fish may be the best version of that diet for us, as it may help prevent a diagnosis of colorectal cancer.

The study, which took place at Loma Linda University in California, found that consuming a plant-based diet and eating fish along with it appears to greatly reduce the risk of developing colorectal cancer.1 Kaplan, Karen. “Vegetarians who ate fish had lowest colorectal cancer risk, study says.” Los Angeles Times. 9 March 2015. Accessed 15 March 2015. http://touch.latimes.com/#section/-1/article/p2p-83016199 The subjects were 77,659 American and Canadian men and women who were tracked for a period of seven years on average. All of the participants belonged to the Seventh Day Adventist Church, which promotes, but does not require, adhering to a vegetarian diet.

The scientists categorized all of the volunteers based on the type of diet they consumed, including meat eaters, vegetarians who eat fish at least once a month, vegetarians who eat eggs and dairy products but no fish, and vegetarians who only eat foods derived from plants. They then analyzed medical records to determine the colorectal cancer risk for each diet.

It turns out that the omnivores were the most likely to develop colorectal cancer, and in fact had a 22 percent higher risk than vegetarians of any kind. But there was quite a bit of difference even among vegetarians. The group with the best outcomes was the pescetarians, or vegetarians who include fish in their diet, with an incredible 43 percent reduced chance of a colorectal cancer diagnosis compared to meat eaters. The next lowest risk was found in the lacto-ovo vegetarians, who consumed dairy and eggs, with an 18 percent lower likelihood than the meat eaters. The strict vegetarians who ate absolutely no animal products came in last among the vegetarians, with a 16 percent decrease versus the meat eaters.

Don’t despair if you can’t give up your meat eating ways, however, as long as you don’t eat it all the time (and choose antibiotic- and hormone-free, organic, grass fed meats when you do). There was a category of individuals characterized as semi-vegetarians who consumed meat at least once monthly but not more than one time each week. This group was found to have an eight percent lower risk of colorectal cancer than the omnivores who ate meat more often. And all of the results were determined after the researchers had factored in such variables as age, gender, daily calorie intake, physical activity level, and family history of colorectal cancer and other diseases.

What makes the vegetarian plus fish diet the most protective for colorectal cancer? The answer likely lies in the terrific health benefits of fish. This low-fat source of protein is rich in DHA and EPA omega-3 fatty acids, which help prevent inflammation throughout the body and lower triglyceride levels in the blood. Fish also has none of the drawbacks generally associated with meat, including links to a higher risk of stroke, heart disease, and diabetes. The reason the pure vegetarians came in last among the vegetarians is likely because their omega-3 comes almost exclusively in the form of alpha-linolenic acid, which in certain circumstances can be pro-inflammatory.  There are three caveats to the wonders of fish. Number one is the way it is prepared, since frying it has been linked to an elevated risk of stroke.2 Nahab, F.; et al. “Racial and geographic differences in fish consumption.” Neurology. 11 January 2011. Accessed 16 March 2015. http://www.neurology.org/content/76/2/154.abstract?sid=5e7e9d86-2610-4247-b10c-f233293ec018 The second issue is not overdoing the types of fish known to contain high levels of mercury, including tilefish and swordfish, as they have been associated with autoimmune disorders3 Somers, Emily C.; et al. “Mercury Exposure and Antinuclear Antibodies Among Females of Reproductive Age in the United States: NHANES.” Environmental Health Perspectives. 10 February 2015. Accessed 16 March 2015. http://ehp.niehs.nih.gov/1408751 and central nervous system problems. And third, through greed and stupidity, we’re overfishing the seas–rapidly exhausting the supply of many species. Quite simply, eating any fish that isn’t farm raised may no longer be an option in a few years.

The current findings, while somewhat limited by their restricted population sample of only Seventh Day Adventists, may still provide some very important insight into ways to cut your risk of colorectal cancer. According to the American Cancer Society, this disease is the not only the third most commonly diagnosed form of cancer, but also the third leading cause of cancer-related mortality in the United States. If dietary changes like moving over to a vegetarian reliant diet, cutting back on meat consumption, and putting fish on the menu can help improve our odds, we should all consider taking these steps. In fact, this is the version of the Mediterranean Diet that Jon Barron has been advocating for years.