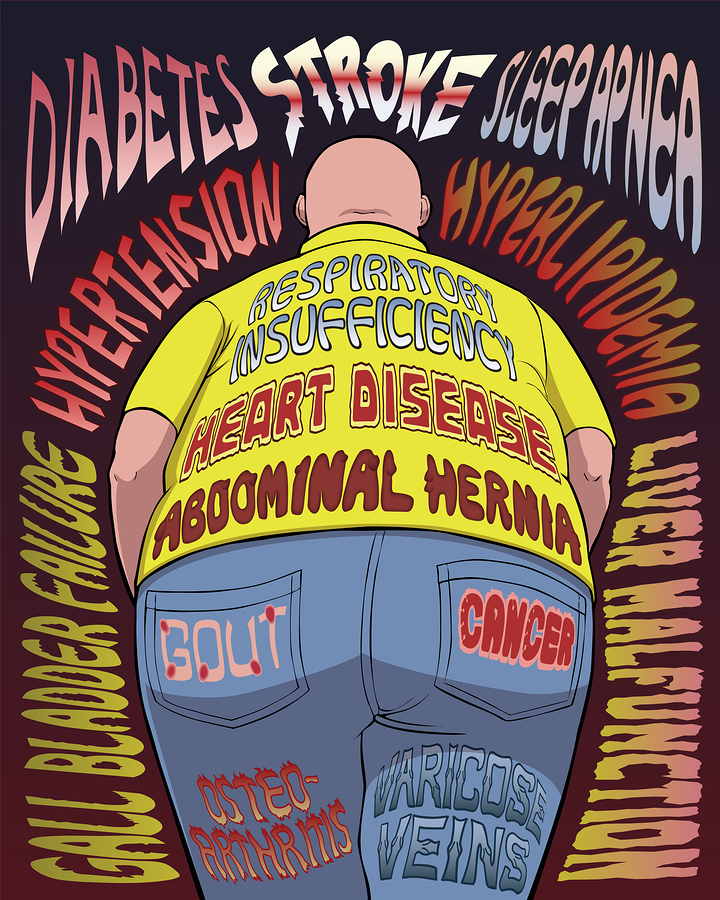 There is really no upside to being overweight. When you are too heavy, you tire more easily and start huffing and puffing while others are still managing fine. And most people are aware that carrying excess weight puts you at risk for a number of health problems such as diabetes, heart attacks, and stroke. However, we are establishing more and more concretely that those ailments may be just the tip of the iceberg. People who are overweight or obese appear to be prime candidates for lots of other diseases as well, including cancer. In fact, new research shows that overweight individuals may have an increased chance of developing many forms of cancer.

The study, which was conducted at the London School of Hygiene and Tropical Medicine in the United Kingdom, determined that being overweight or obese may be associated with 10 of the most common types of cancer.1 Mundasad, Smitha. “Being overweight or obese ‘linked to 10 common cancers’.” BBC News. 13 August 2014. Accessed 17 August 2014. http://www.bbc.com/news/health-28779493 The subjects were approximately five million U.K. residents whose medical records were examined across a seven-year period.

The researchers found that with roughly every 29 to 36 pounds (or 13 to 16 kilograms) of extra weight carried by the average adult there was a correlating increase in the risk of developing certain cancers, which varied somewhat by where the disease originated. The most pronounced risk was linked to uterine cancer, which is the most frequently found gynecologic cancer according to the Centers for Disease Control and Prevention. Other forms of cancer that were also demonstrated to have an elevated chance of developing as weight rose were those of the gallbladder, kidney, cervix, and thyroid, as well as leukemia.

Rounding out the top 10 forms of cancer were a few malignancies not necessarily more prevalent as weight went up, but squarely associated with having a high body mass index in general. These included liver cancer, colon cancer, ovarian cancer, and post-menopausal breast cancer. The difference in these cases also might have to do with other influential factors, such as a change in hormone levels (which is often caused by weight gain) and alcohol consumption.

So, while of course there are other genetic and environmental effects playing a role in the formation and growth of cancerous cells, being overweight certainly seems to have quite an impact on risk. And the 10 types of cancers for which the scientists demonstrated a connection with a high BMI are among the most frequently found types of the disease around the world. Links between obesity and cancer have been found before, even as far back as in 1993 in a Danish study comparing nearly 44,000 obese individuals with their normal weight counterparts.2 Moller, Henrik; et al. “Obesity and cancer risk: a Danish record-linkage study.” European Journal of Cancer. 1994. Accessed 18 August 2014. http://www.ejcancer.com/article/0959-8049(94)90254-2/abstract The current research adds to all of the previous evidence and provides further validity because it includes such a large population sample.

This is a serious problem globally these days as rates of obesity have been steadily climbing. A study earlier this year at the Institute for Health Metrics at the University of Washington in Seattle found that close to 30 percent of the worldwide population is now either overweight or obese.3 Murray, Christopher J.L. and Ng, Marie. “Nearly one-third of the world’s population is obese or overweight, new data show.” Institute for Health Metrics and Evaluation. Accessed 19 August 2014. http://www.healthdata.org/news-release/nearly-one-third-world’s-population-obese-or-overweight-new-data-show If something doesn’t start to change, that will likely mean vastly higher rates of assorted kinds of cancer, heart disease, diabetes, and other ailments to which all of these extra pounds contribute.

But no pharmaceutical pill or trendy diet plan will magically melt away the weight that so many people need to lose to have realistic hopes of a healthy future. If you know that your BMI is too high–at 25 or above–or you’ve steadily gained weight since high school, childbirth, or hitting middle age, stop making excuses and saying it happens to everyone. It doesn’t have to happen to you.

You just need to take your health more seriously, starting with revamping your diet–shifting to a Mediterranean diet makes all the sense in the world. The other part of the equation is physical activity, which is essential to lowering disease risk and living a healthier lifestyle. Start off slowly, doing some walking, bicycling, or swimming and increase your duration as you become more fit. Add in muscle toning exercises and flexibility work, and before you know it, you will not only be feeling better but lowering your cancer risk as well.

Gallery image with caption: Watch Your Weight in Your 20s to Decrease Cancer Risk

Gallery image with caption: Where You Live and How You’ll Die May be Linked