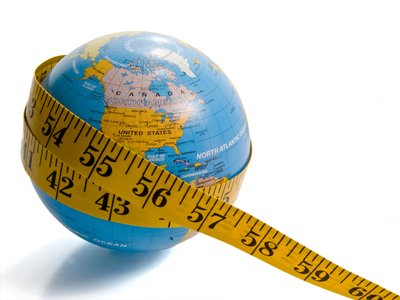 When most of us think about high rates of obesity, our focus is firmly on the United States. With our love of fast food convenience and a “why walk when you can drive” attitude, it isn’t shocking that so many Americans are overweight and out of shape. But what about the rest of the world? Sadly, it appears that steadily fatter populations are becoming commonplace everywhere. According to new research, the whole world is going American!

The study, which took place at the Institute for Health Metrics and Evaluation at the University of Washington in Seattle, found that while the U.S. is still number one on the obesity list, countries everywhere are following suit and close to 30 percent of the worldwide population is now either overweight or obese.1 Fox, Maggie. “The Whole World Is Getting Fatter, New Survey Finds.” NBC News. 27 May 2014. Accessed 3 June 2014. http://www.nbcnews.com/health/diet-fitness/whole-world-getting-fatter-new-survey-finds-n115811 The researchers obtained data from 188 nations from every part of the globe and determined that approximately 2.1 billion individuals are carrying excess weight. And not a single country has been successful in lowering its obesity rate since 1980.

Using body mass index as a method of separating those in a healthy weight range from those who are overweight, the scientists determined that both men and women around the world are expanding in girth. The percentage of men who have a BMI of 25 or higher, indicating they are overweight or obese, has risen dramatically from 28.8 percent in 1980 to 36.9 percent in 2013. And the numbers for women are even worse. There were 29.8 percent with a BMI of 25 or higher in 1980, rising to 38 percent in 2013. When the focus shifts to age, the worst years for men are 50 to 54, at which point a whopping 80 percent of males have BMIs that indicate they are overweight or obese. Interestingly, women hit their worst numbers a few years later. Between the ages of 60 and 64, a depressing 73 percent of women are overweight or obese.

What’s potentially even worse news is that obesity in children is growing at an alarming rate around the world as well. The number of kids and adolescents with a BMI of 25 or above shot up by almost 50 percent between 1980 and 2013. Among the children living in developing nations, more than 22 percent of girls and almost 24 percent of boys are currently heavier than they should be.

And then there are Americans, in a class by ourselves. We’re number one! We’re number one! The U.S. remains the leader in sheer number of obese adults, with the astounding figure of 78 million. In fact, the country is home to five percent of the people on the globe, yet we account for 13 percent of the overweight and obese world population. Close to three-quarters of men and more than 60 percent of women in the U.S. carry excess weight. And our children aren’t faring much better. In 1980, 19 percent of kids and teenagers were deemed overweight or obese. By 2013, that had risen to nearly 30 percent.

What’s more, there is nothing to suggest that this continuing increase in weight will level off any time soon. In fact, a 2012 study at the Johns Hopkins Bloomberg School of Public Health in Baltimore, Maryland, found that if current trends continue on course, 86.3 percent of adults in America will be overweight or obese by 2030.2 Wang, Youfa; et al. “Will All Americans Become Overweight or Obese? Estimating the Progression and Cost of the US Obesity Epidemic.” Obesity. 6 September 2012. Accessed 4 June 2014. http://onlinelibrary.wiley.com/doi/10.1038/oby.2008.351/full

So what can we do to reverse the trend? We each have to take care of our own health, and part of that responsibility means maintaining a fit weight. Being overweight or obese increases the risk of diabetes, cardiovascular disease, cancer, and more. There are no magic bullets. If you don’t want to become a part of these depressing statistics–or want out if you already are–you need to take a new approach to your daily habits. Start small, making improvements to your diet by eating more nutrient dense foods and minimizing grains and high glycemic carbohydrates. Add an exercise component–even if it’s just walking for 15 or 20 minutes a day to get started. As the weight starts coming off, you will feel so much better that you just might be motivated to take on even greater changes and truly optimize your health.