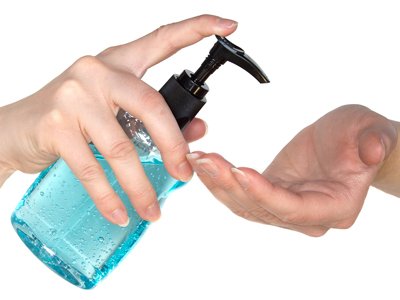 Widely touted by manufacturers as the best way to fight germs, especially when we’re on the run and not able to wash up thoroughly, products containing antimicrobials have become very popular since their inception. They can potentially kill not only bacteria but also yeast, fungi, parasites, and viruses, yet these liquid soaps and sanitizers still have not been proven to be any more effective than simple soap and water. And antimicrobials, such as triclosan, are used in a much wider variety of products than just those designed to remove germs from the hands.  Other common items that often contain triclosan include toothpastes, shaving gels, mattresses, blankets, and much, much more. But new research has found that triclosan may very well be a dangerous addition, as it appears to promote the growth of breast cancer cells.

The study, which was conducted at Chungbuk National University in Cheongju, Republic of Korea, discovered that certain antimicrobial agents may encourage the development of human breast cancer cells both in a laboratory setting and within breast tumors in mice.1 “In lab tests, the antimicrobial ingredient triclosan spurs growth of breast cancer cells.” Science Daily. 23 April 2014. Accessed 30 April 2014. http://www.sciencedaily.com/releases/2014/04/140423102756.htm The two chemicals the researchers tested were triclosan and octylphenol, a surfactant commonly used in paints and certain plastic items. In one part of the experiment, the scientists added triclosan and octylphenol to lab dishes containing human breast cancer cells and the number of cancer cells grew. The second portion of the experiment involved administering the two agents to mice that had been grafted with breast cancer tissues. In the animal subjects, the results were the same, with the mice that had exposure to triclosan and octylphenol developing larger, more dense breast cancer masses than their counterparts that had not received any exposure.

These findings should not come as any great surprise, since both triclosan and octylphenol are known to be endocrine-disrupting chemicals (EDCs). These man-made substances behave similarly to hormones and adversely affect the endocrine system. This may result in a range of problems, including reproductive issues, neurological impairments, and immune system difficulties. Now this study shows that a potential risk of exposure to these chemicals may be advancing cancer cell growth, particularly in certain types of malignancies such as breast cancer that are more significantly affected by hormonal imbalances.

This is particularly scary since both of these compounds are used in the manufacturing of tons of products. And that is despite the fact that the safety of triclosan has been in question for a number of years already. Triclosan is used in things we put on our skin, such as soap and makeup, as well as things that touch our food like cutting boards. And it is known to enter the soil and water, including our drinking water supplies. A 2008 study at the Centers for Disease Control and Prevention in Atlanta determined that triclosan is pervasive in our bodies too, with approximately 75 percent of Americans age six or older testing positive for this substance in their urine.2 Calafat, Antonia M.; et al. “Urinary Concentrations of Triclosan in the U.S. Population: 2003-2004.” Environmental Health Perspectives. March 2008. Accessed 2 May 2014. http://www.ncbi.nlm.nih.gov/pmc/articles/PMC2265044

Therefore, even though the amounts of the EDCs used in the current study were rather large, the scientists made this choice on purpose. After all, if people are exposed to these chemicals all day long in so many things that they come into contact with, the exposure to the cells of the body–including abnormal cells such as the breast cancer cells–would be considerable as well.

So how do we protect ourselves from these ubiquitous compounds that we appear to be surrounded by, even within our own bodies? It would be virtually impossible to achieve no exposure at all, since EDCs are rampant in household items now. But you can minimize your exposure to some extent by reading the labels on products to make sure they are not listed as ingredients. You can also start using a natural hormone-balancing creme that can help block hormone receptor sites, which can counteract the effects on your endocrine system that compounds like triclosan produce. Plus, simple lifestyle changes such as maintaining a healthy weight, eating a nutritious diet, and exercising every day have been proven to lower your chances of developing cancer and can help you remain healthy all around.3 “Can breast cancer be prevented?” American Cancer Society. 31 January 2014. Accessed 2 May 2014. http://www.cancer.org/cancer/breastcancer/detailedguide/breast-cancer-prevention