Are We Growing Horns Because of Our Smartphones?

Are Horns Growing on Skulls From Smartphones?

There is no doubt that technology has made a huge impact on our lives over the past two or three decades. Young adults in their late teens and 20s might have difficulty imagining a world without social media to check regularly for updates, texting to communicate with friends, and Google readily available to answer every question. But this constant involvement with smartphones might be having an effect that goes beyond changing how we communicate and perform certain activities. There is research that suggests it may be changing the bone structure within our heads.

The study, which took place at the University of the Sunshine Coast in Queensland, Australia, found that young people may be developing very small horns at the base of the skull, and smartphones could potentially be to blame.1Shahar, David and Sayers, Mark G.L. “Prominent exostosis projecting from the occipital squama more substantial and prevalent in young adult than older age groups.” Nature. 20 February 2018. Accessed 24 June 2019. http://www.nature.com/articles/s41598-018-21625-1. These results are based on two investigations conducted by the same team of researchers who were seeking to determine whether individuals are developing small spike-like growths at the back of their heads, which are known as an external occipital protuberances.

In their first version of the study, 41 percent of the 18- to 30-year-old subjects were found to have hornlike structures that were greater than 10 millimeters (0.4 inches) in length. The second segment of the study was an analysis of 1,200 X-rays of participants ranging in age from 18 to 86, and 33 percent were seen to have the horns.

How Horns, Bone Spurs, and Smartphones are Linked

These horns are actually a kind of bone spur, formed over time when inflammation damages joint cartilage and the body reacts by growing more bone, and they are not uncommon in elderly people. But they typically develop from years of wear and tear and sagging posture. This is the first research to find them developing in a younger population, which is why the investigators believe that technology is to blame.

It is the pronounced forward tilting of the head that we use to look downward at the screen of a smartphone that puts a strain on muscles. This repetitive motion may eventually be responsible for the damage that leads to growths such as the horns that were noted. And it’s possible that the horns are now developing more quickly in younger people because they use their smartphones so frequently and because this has been a regular occurrence since their bodies were developing through childhood and adolescence.

No Definitive Proof That Smartphones Cause Horns

Despite the fact that this study had two variations and both showed evidence of the presence of horns, there were also definitely limitations to its design. First and foremost, the study does not collect any information on smartphone habits, so it is impossible to say definitively that those who use their smartphones most often are the ones growing horns.

What’s more, in the second portion of the research that focuses on the X-rays, the data shows that the likelihood of horns was lower in the older volunteers included. Since these horns are known to develop in elderly populations, we would expect to see more of them in that segment of the population, which calls into question the validity of the X-ray data.

Are We Safe Using Our Smartphones?

While the jury may still be out on the safety of exposure to the radiation our smartphones emit next to our heads, we do know for sure that the typically head down posture we maintain while looking at our smartphones is bad for our bodies. It might or might not contribute to the growth of these minor horns on the skull, but either way it certainly does put major strain on the muscles of the neck, upper back, and shoulders.

To combat that, try to be conscious of your positioning when using your smartphone. Hold it up so you need to tilt your head less or set the phone on a surface that allows you to look forward or even slightly upward toward the device. Stretch out the affected muscles with head rolls and shoulder rolls throughout the day. And, if all else fails, make it a point to schedule regular massage appointments and let your therapist know to focus a lot of energy on your shoulder and neck area. 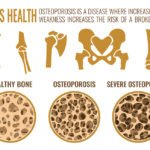