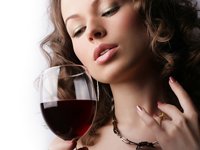 The ongoing debate about red wine benefits stirs up nearly as much controversy as does the subject of who should win American Idol. Is merlot good for you? Is it bad for you? One study reveals that a cabernet a day keeps the doctor away; the next finds the stuff teeming with heavy metals.

This week, though, the advantage seems weighted toward the pro-wine camp, with the publication of an article in The Journal of Clinical Nutrition touting the digestive benefits wine provides.1 Beyond its status as a rich source of antioxidants, says the article, red wine also provides a rich source of digestive probiotics. Yes, that’s right: probiotics! This assertion is based on a small study that asked participants to avoid all alcohol for two weeks. Then, for the next 20 days, the participants enjoyed a cup of red wine daily.  Following that, they drank red wine with the alcohol removed for 20 days. Finally, they spent 20 days drinking gin — well, a glass of gin a day.

The researchers noted that when the subjects drank red wine, either with or without alcohol, they gained a number of advantages not present when they abstained. Of course, many other studies have also found that red wine does good things, and especially, that it promotes heart health. But this study found yet another advantage: drinking the wine significantly increased levels of gut probiotics, including bifidobacteria, enterococcus, prevotella, and bacteroides. As Jon Barron has described in other articles, probiotics are essential to digestive health. Probiotics also lower cholesterol, inhibit cancer, boost immunity, and protect against numerous other systemic conditions.

The researchers believe it’s the polyphenols in wine that boost the growth of the friendly bacteria. They explain, “We found that red wine polyphenols can inhibit non-beneficial bacteria from the human microbiota and potentiate the growth of probiotic bacteria such as bifidobacteria, which could be implicated in the reduction of CRP and cholesterol observed in our study, promoting health benefits in the host.”

In other words, red wine not only encourages the proliferation of friendly bacteria, but also, simultaneously provides protection against foodborne pathogens.2

In the current human study, in addition to increasing probiotics in the gut by drinking red wine, subjects reduced systolic and diastolic blood pressure by a significant margin. They also reduced total cholesterol, HDL, and C-reactive protein (a marker for inflammation present in the blood).  These benefits duplicate results found in numerous studies on red wine, and most likely result from antioxidants abundant in red wine, possibly including the much-touted resveratrol. (Although wine doesn’t actually contain much resveratrol.)

Drinking gin, on the other hand, didn’t do a whole lot for the subjects (except, perhaps, to lend them a happy buzz). Gin did raise the level of probiotics in the gut, but by such a small margin as to be insignificant. Anyway, nobody is arguing that gin is a health-enhancer.

But back to wine. It sure seems that wine has much to recommend it, now with this latest evidence that it helps not only the heart, but also enhances digestive health with all the associated benefits. We’ve also reported before that drinking wine in moderation seems to protect against depression. (Actually, for beating the blues, any alcohol will do according to the study cited — which is curious, considering that alcohol is classified as a depressant — but other alcoholic beverages lack wine’s other virtues.)

On the other hand, we reported previously about a huge study in England involving over a million women, which found a significant tie between wine consumption and breast cancer incidence. The study also found a 22 percent rise in laryngeal cancer, and significant increases in cancers of the rectum, liver, and mouth in women who drank just a glass of wine daily. In fact, the researchers concluded that alcohol consumption accounts for about 13 percent of all breast, liver, rectal, and upper digestive tract cancers in women.

While it’s unclear exactly why wine has carcinogenic effects, certainly the off-the-charts heavy metal content may play a role. As we’ve reported in the past, a 2008 study found that many wines contain heavy metals up to 200 times the amount considered safe. For the sake of comparison, seafood that you’re supposed to avoid typically has a Target Hazard Quotient (THQ) level between one and five, while most of the wines tested in the 2008 study had THQ levels between 50 and 200. And then, there are the pesticides, too.

You might be able to minimize your risk by sticking with organic wines. Also, wines from certain places (Italy, Argentina, Brazil) don’t have the heavy metal problem. It’s possible that U.S. and Australian wines also are okay, as they weren’t included in the study. But before you stock up on the organic chiantis from Tuscany, consider that there may be something about alcohol by itself that triggers hormonal disruptions that lead to breast and other cancers.

Oh, what to do, what to do? Cancer risk, versus heart and digestive benefits plus a fun buzz?

Perhaps as the wine debate continues to unfold, it makes sense to follow the middle path. Enjoy wine on occasion, and don’t make the occasion an every-day affair. Also, stick to one or two glasses at a time, rather than an entire bottle. At the least, stick with organic wines that don’t come from the heavy-metal nations, like France. On the other hand, you can avoid all the worry by sipping coffee instead of clinking a glass of cabernet. A study just released found that drinking a few cups of coffee daily lowers the risk of death by a nice margin.3 Plus, coffee also gives a buzz, albeit of a different variety. And then, of course, there are those who do both — coffee and wine — at dinner. They must be trying to live forever!