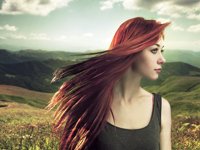 Redheads often stand out in a crowd because they are relatively uncommon.  Their ginger locks–anywhere in the spectrum from strawberry blonde to dark auburn–are often paired with fair skin that is prone to sunburn.  They are known to have a higher risk of developing the most prevalent form of skin cancer, melanoma, than those with darker complexions.  But now new research suggests this risk may be hardwired into them genetically along with the red hair, even if redheads keep their sun exposure to an absolute minimum.

The study, which took place at Massachusetts General Hospital in Boston, determined that red hair genetics and melanoma causes may go hand in hand even without the presence of damaging ultraviolet light rays…at least in mice. 1 Morin, Monte. “Redheads may be at higher risk of melanoma even without sun.” Los Angeles Times. 31 October 2012. Accessed 5 November 2012.  http://articles.latimes.com/2012/oct/31/science/la-sci-red-hair-melamona-20121101    You might be wondering where these enterprising scientists found redheaded mice to experiment on.  As it turns out, there are actually naturally-occurring redheaded mice, with hair of a golden yellow hue rather than the bright red of, say, Lucille Ball.

The researchers included groupings of golden yellow, black, and albino mice that were all bred to be predisposed to skin cancer in their study.  Mice were chosen because their hair pigmentation is decided by the same chemicals as human hair–eumelanin and pheomelanin.  Eumelanin is a brownish-black form of pigment, while pheomelanin is a red-yellow pigment.  Produced within the skin, these two forms of melanin establish the coloration of both skin and hair, depending upon the concentration of each.

The goal of the experiment was originally to obtain information about moles resulting in melanoma after exposure to ultraviolet rays.  But the objectives changed when some of the mice began to develop skin cancer even before a single light ray was shone upon them.  When half of the golden yellow mice were found to have melanoma within a year of beginning the study, researchers actually double checked the holding room to ensure that nothing was leaking UV light on the subjects.  While both the black and albino mice also developed melanoma, it was found in less than 25 percent of those groups, compared to more than 50 percent among the redheads. 2 Smith, Michael. “Melanoma Risk May Be Genetic for Redheads.” ABC News. 1 November 2012. Accessed 7 November 2012. http://abcnews.go.com/Health/CancerPreventionAndTreatment/melanoma-risk-genetic-redheads/story?id=17617651

This outcome caused the scientists to come up with a new theory: since the melanoma was not a result of ultraviolet light exposure, perhaps it was instead caused by the skin’s pigment itself.  While the pheomelanin pigment is associated with a higher risk of skin cancer, it has always been believed that this risk resulted from pheomelanin triggering increased sensitivity to UV rays.  Now, it seems worth considering that the mere presence of this pigment might be responsible for some percentage of melanoma even without sun exposure.  The researchers believe this might be due to pheomelanin increasing oxidative stress within the cells of the skin.  The cells begin to produce free radicals that the body can defend itself against when we are healthy. 3 Weil, Andrew. “Stumped by Oxidative Stress?” Dr. Weil. 17 March 2009. Accessed 7 November 2012. http://www.drweil.com/drw/u/QAA400537/Stumped-by-Oxidative-Stress.html    But eventually the onslaught triggered by pheomelanin wears down these defenses and starts damaging the skin cells and their very DNA.  Over time, this damage accumulates and may set the stage for melanoma.

While experiments with mice often do not translate to the same results in humans, sometimes they do, which means this could be an important finding for those with fair skin and red hair.  Although there is nothing we can do to change the coloring we inherit, it is extremely important to avoid excessive midday sun exposure as much as possible since that seems to increase the risk even more. On the other hand, you absolutely want some midmorning and late afternoon exposure to boost your vitamin D levels, which numerous studies have indicated can help protect against skin cancer. 4 “Melanoma – Further research.” Vitamin D Council. 18 July 2011. (Accessed 9 Nov 2012.)  http://www.vitamindcouncil.org/health-conditions/cancer/melanoma/further-research/
Get full body checks of your skin to make sure no moles or freckles have changed.  And to protect from oxidative stress naturally, try increasing your intake of antioxidants.  Eating foods packed with free radical fighters–found in a wide variety of fruits and vegetables–can benefit your entire body.  As added insurance, consider using an antioxidant supplement as well, which can provide extra fortification, especially for the red heads among us who may be most likely to develop certain forms of cancer.