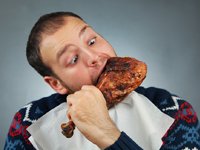 Out in the wild, the fierce carnivores are usually at the top of the food chain in their domain.  Think about it: lions, bears, wolves, and the like are all predators that typically dine on less ferocious species.  And we humans tend to personify their achievements by calling them the kings of the jungle or leaders of the pack.  Maybe that’s got something to do with the reason certain men think it’s manlier to be a meat eater.  According to recent research on male diet, meat consumption is an important part of our cultural idea of what it means to be a man1 Fox, Maggie. “Why real men eat meat: It makes them feel manly.” MSNBC. 21 November 2012. Accessed 28 November 2012. http://www.msnbc.msn.com/id/49920136/ns/health/#.ULkOyhzeXtR –as long as you don’t count the entire Roman army, which was mostly vegetarian.

Two studies, undertaken by the same researcher at Bellarmine University in Louisville, Kentucky, found that, among a certain population of men, eating meat is important to their image of masculinity.  Around holiday time especially, it appears to please these men to be able to show off the huge turkey, pot roast, or ham they are carving up and serving in a manly way…even if the only hunting they had to do to obtain this meat was in a supermarket aisle.

These findings, however, were based on particularly small and limited research.  All of the participants were undergraduate students taking a psychology course who answered questionnaires.  In the first study, 125 adults were involved, and in the second there were only 89 subjects.  The point of the exercise was to gain some insight as to why people would choose to consume meat despite all of the health issues associated with it.

The male volunteers tended to verbalize beliefs that included the thought that humans are meant to eat meat, religious reasons, rationalizations about meat’s nutritional value, and the rejection of animal suffering arguments.  But through all of their justifications, the men’s overall attitude appeared to focus on the fact that they simply liked the taste of meat and would miss it if they gave it up entirely.  In contrast, the women involved in the study seemed to have much less vehement feelings about meat consumption and expressed more concern about the welfare of the animals they might potentially be dining on.

The population sampling taken for this research was not only small, but also extremely narrow.  The vast majority of subjects were between the ages of 18 and 22, white, and from similar middle-class socioeconomic backgrounds.  A little more variety among the participants might have produced very different findings.  Young men in general are not always terribly focused on their own health needs or going to the doctor for checkups.  They are also not typically thinking about their own mortality or the prevalence of conditions such as cancer or heart disease that have been linked to heavy consumption of meat.2 Bakalar, Nicholas. “Risks: More Red Meat, More Mortality.” The New York Times. 12 March 2012. Accessed 29 November 2012. http://www.nytimes.com
To college-age men, these are illnesses for much older people to worry over, even as the public becomes more aware that these health problems are occurring in younger and younger people. And keep in mind, it’s much easier to feel manly if you’re not thinking about getting sick.

The fact remains that men who eat a lot of meat may “feel” the most masculine, but there are indications they may be harming themselves–Caveman Diet aside.  In addition to certain cancers and heart disease, frequent consumption of standard, grocery-store meat has been associated with a greater risk of atherosclerosis, stroke, and diabetes when compared to people who eat meat very infrequently or never.  And that’s not even including the dangers of eating processed meats, such as bacon or hot dogs, which are even worse.3 Shaw, Jonathan. “A Diabetes Link to Meat.” Harvard Magazine. January-February 2012. Accessed 29 November 2012. http://harvardmagazine.com/2012/01/a-diabetes-link-to-meat

Eating meat as part of a male diet can be a hard habit to break, especially if you come from a steak and potatoes kind of family where no dinner was complete without meat on the table.  On the other hand, you don’t have to quit cold turkey (pun intended) and never touch the stuff again. In terms of health, just choosing “clean” meats and keeping consumption below 4 oz a day is all that’s required for health. Anything beyond that is more of a moral and ethical decision. A more realistic plan for most meat eaters who want to be a little healthier would be to gradually lessen the amount of meat you consume by a meal here and a meal there, slowly replacing them with vegetarian dishes.  When you do eat meat, choose organic grass-fed meat, which come from animals given no antibiotics, growth hormones, or feed containing pesticides or cow products — and try and eat smaller portions.  With some good vegetarian recipes, you just might find that you are not missing your meat-based meals all that much.  And the health benefits may end up making you feel more masculine and virile than ever. Note: when going vegetarian, don’t go heavy on grains, starches, and high glycemic foods. That’s even less healthy than high meat consumption.

And don’t worry about losing your masculinity. World Cage Fighting Champion, Mac Danzig is a dedicated vegetarian, and he’s about as macho as they come…