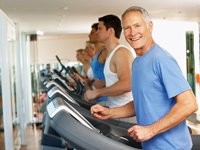 It’s hardly news that living a healthy lifestyle and maintaining your physical fitness can cut your risk of developing numerous diseases.  But no one has really had any evidence establishing just how long the health benefits might last…until now.  New research has found that a high level of fitness in middle age appears to confer some protection from cancer in men for at least 20 years and leads to healthy aging.

The study, which took place at the University of Vermont in Burlington, found that men with high fitness levels while in their early 50s were much less likely to be diagnosed with cancer in their 70s than their less fit counterparts.1 Fox, Maggie. “Fitness protects you from cancer, even 20 years later.” NBC News. 17 May 2013. Accessed 21 May 2013. http://www.nbcnews.com/id/51910901/#.UZ1qaBxnrtQ   In addition, the fit men who did eventually develop some form of cancer had a much lower risk of dying from the disease.  These findings were based on the medical records of more than 17,000 men who had participated in exercise trials at the Cooper Institute in Dallas, Texas, during the 1970s.2 “About Us.” The Cooper Institute. Accessed 22 May 2013. http://www.cooperinstitute.org/about   Each of these subjects took part in a fitness test at the Cooper Institute, which became their baseline fitness evaluation for this research.

The assessment that was conducted is known as the metabolic equivalent of task (MET).  It is used to measure the energy expended during a particular activity.  For example, sleeping uses one MET and doing laundry uses two.3 “Metabolic Equivalent (MET) Values for Activities in American Time Use Survey (ATUS).” National Cancer Institute. 25 May 2011. Accessed 22 May 2013. http://riskfactor.cancer.gov/tools/atus-met/met.php   The participants were made to walk at a brisk pace on an inclined treadmill.  A typical middle-aged person of average fitness would be at approximately nine METS during this task, as compared to a more athletic individual, who might be somewhere around 15 METS.  And an elite-level athlete is usually around 20 METS during this type of activity.

The men at the Cooper Institute were timed and categorized by age.  Those between the ages of 40 and 49 who were the least fit averaged less than 13.5 minutes on a maximum treadmill incline.  The least fit between the ages of 50 and 59 managed an average of less than 11 minutes, and the 60 and older group remained on the treadmill for less than 7.5 minutes.  Examining the health records of the men over the course of the following 20 to 25 years, the researchers noted that 2,332 of them developed prostate cancer, 277 developed lung cancer, and 276 developed colon cancer.  Of these, 347 men were cancer fatalities and another 159 died of cardiovascular disease.

Based on that initial fitness evaluation taken at some point in the 1970s, the fittest men during middle age were found to have a 68 percent lower risk of getting lung cancer and a 38 percent lower risk of colon cancer two decades later.  The fittest group also had a considerably lower risk of dying if they were diagnosed with any of these three forms of cancer.  Each level of fitness achieved on the MET scale decreased the likelihood that a man would die of cancer by 14 percent and cardiovascular disease by 23 percent.

The scientists could not determine from this study whether the reduced risk of disease would remain the same if the men had not always been relatively fit.  It is possible that some of them did not remain in shape as they aged.  And others may have become more fit as they approached middle age than they had been in their 20s.  It has been shown in numerous studies that increasing physical activity can make a huge difference to overall natural health and disease protection, including lowering the risk of certain cancers, heart disease, stroke, type 2 diabetes, high blood pressure, and more.4 “Physical Activity Guidelines for Americans.” U.S. Department of Health & Human Services. 16 October 2008. Accessed 22 May 2013. http://www.health.gov/paguidelines/guidelines/chapter2.aspx But don’t go overboard; too much of a good thing is bad. Studies have shown that, at least in women, overdoing exercise can cost you brain function as you age. In other words, although you might not get cancer, there’s a chance you might not have enough brain function left to know it.

That said, even if you have not always maintained the highest level of fitness, you can still lessen your chances of developing disease over time.  A large part of the problem lies in the fact that so many people do no regular exercise at all.  In a 2013 study conducted at the Centers for Disease Control and Prevention in Atlanta, Georgia, it was determined that close to 80 percent of adults in the United States do not meet the government’s recommendations for weekly exercise.5 “Adult Participation in Aerobic and Muscle-Strengthening Physical Activities–United States, 2011.” CDC Morbidity and Mortality Weekly Report. 3 May 2013. Accessed 22 May 2013. http://www.cdc.gov/mmwr/preview/mmwrhtml/mm6217a2.htm?s_cid=mm6217a2_w   It is high time for the minority to become the majority and start making some time for workouts every single day.  If we don’t, all signs seem to point toward a bleak and unhealthy future for a very large segment of the population. And there’s a good chance you’ll know it. 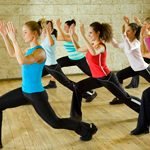 Sitting Causes Cancer Even if You Exercise