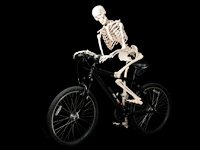 Everyone has a hectic life these days.  Long hours at work, family responsibilities, errands to run, things to take care of at home, and so on.  It’s easy to make excuses for why we couldn’t find the time to work out one day, but too many of us make a habit of skipping exercise.  And new research suggests that the vast majority of American adults are foregoing physical fitness and exercise on a regular basis.

The study, conducted by scientists at the Centers for Disease Control and Prevention in Atlanta, Georgia, found that close to 80 percent of adults in the United States do not meet the government’s recommendations for weekly exercise.1 “Adult Participation in Aerobic and Muscle-Strengthening Physical Activities — United States, 2011.” CDC Morbidity and Mortality Weekly Report. 3 May 2013. (Accessed 8 May 2013.)  http://www.cdc.gov/mmwr/preview/mmwrhtml/mm6217a2.htm?s_cid=mm6217a2_w
The findings were determined by compiling data obtained through a telephone survey.  More than 450,000 randomly selected people 18 years and older across the country participated.  The survey questions revolved around the types of exercise the individual performed, as well as how frequently and for what duration.  The criteria that the researchers measured against is the government recommendation of a minimum of 2.5 hours weekly of moderate intensity aerobic activity or one hour and 15 minutes of intense aerobic activity, or some combination of these guidelines.

Sadly, a mere 20.6 percent of the subjects reported reaching these recommended totals.  By gender, it broke down as approximately 23 percent of men and 18 percent of women who are getting enough exercise according to the standards used.  The group with the highest percentage of exercisers, at 31 percent, are those between 18 and 24 years old.  That could potentially be a positive, in that younger people are understanding the importance of physical activity and may continue to exercise as they age.  However, it just as easily could be that this group has the most free time and will likely slack off the exercise as they start working full-time jobs and have a family.  After all, the presumably retired subjects in the study, those 65 and over, feasibly have at least some spare time but they are not spending it exercising.  In fact, they were the least active group by age, with only 16 percent of the seniors meeting exercise guidelines.

When the physical activity parameters were divided into categories of aerobic exercise and muscle-strengthening exercise, it became clear that more people are focusing on their cardiovascular fitness.  Approximately 52 percent of the participants reported that they are getting at least the minimum recommended amount of aerobic activity.  Less encouraging were the numbers of those doing strength training.  Only 29 percent of the participants said they were meeting the minimum recommendations, which only call for twice-a-week workouts.

While race and ethnicity did not make much difference in the amount of physical activity being performed, education did.  College graduates made up more than 27 percent of those regularly exercising.  In contrast, the subjects who had not finished high school had the worst record, at only 12 percent of those exercising.  Geography was another factor in working out.  The state with the highest percentage of exercisers was Colorado, with more than 27 percent, while Virginia and Tennessee had the dubious distinction of tying for last place among the percentage of adults exercising, at less than 13 percent in each state.

These results are just further confirmation of the CDC study released earlier this year that found that even though people are eating less junk food and consuming fewer calories with a more balanced diet, obesity is still climbing because people are burning ever fewer calories. The surprise in that study was that people were actually exercising more. The problem was that they were doing far less physical work throughout the day, and spending much more time sitting at a desk and watching TV. The net result was fewer calories burned, even with slightly more exercise.

Taken as a whole, it is a painfully clear reminder that way too few Americans are getting enough exercise. And it’s not just a problem in the U.S., either.  A 2012 study at Brigham and Women’s Hospital in Boston, Massachusetts, found that a lack of exercise worldwide may be responsible for as many as 10 percent of premature deaths.2 Park, Alice. “Lack of Exercise as Deadly as Smoking, Study Finds.” Time. 18 July 2012. Accessed 7 May 2013. http://healthland.time.com/2012/07/18/lack-of-exercise-as-deadly-as-smoking-study-finds   That’s because inactivity has been linked to an increased risk of developing Type 2 diabetes, cardiovascular disease, and certain types of cancer.

And working out is essential for each and every one of us, not just for the overweight as a means to lose excess pounds.  While regular exercise can definitely help with weight loss and in the maintenance of a healthy weight, it also is proven to provide stress relief, improve the quality of sleep, and increase your energy levels.3 “Exercise: 7 benefits of regular physical activity.” Mayo Clinic. 23 July 2011. Accessed 7 May 2013. http://www.mayoclinic.com/health/exercise/HQ01676   An aerobic regimen is very important, whether you opt for biking, hiking, running, swimming, or brisk walking–and, of course, interval training.  But don’t forget the necessity of including other forms of exercise as well.  Our muscles need regular strength workouts too in order to remain strong and improve our calorie burning efficiency.  Stretching and balance workouts nicely round out the routine, helping with circulation, coordination, and a host of other benefits.  If you are new to exercising, start off slowly, but include all of these areas to truly make a difference for your health.