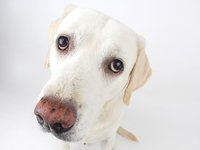 People with mental disease and health problems typically seek relief by hiring a shrink or snagging a prescription. The adventurous few might sign on for a trek in the Himalayas or a five-month silent retreat, but if you prefer a cuddlier solution, various studies show that you might do just as well with dog therapy.

We’ve written before about the benefits of dog ownership — about how pets can help you reduce blood pressure, cholesterol, and triglycerides. We’ve mentioned that they can help you to feel less lonely and like yourself more, that they can even identify cancer and increase the likelihood that you’ll remember to exercise. If that’s not enough reason to send you to the pound with adoption papers in hand, here are a few more reasons to put up with doggie breath and barking at 3:00 am. Dogs, it seems, can help heal PTSD, alleviate depression, and act as home-health-care aides. And now, new studies show that dog therapy can help children with autism.

“Therapy dogs” differ from run-of-the-mill family pets in that they’ve gone through rigorous training and passed tests that prove they can provide valuable mental health service to owners. To train a dog costs a bundle — as much as $35,000, although $600 or so usually buys the basic “service dog” program.1 The high expense comes when the dog receives advanced, specialized training. And yes, believe it or not, just like in the human medical field, the helper dogs do specialize. Fido can be a therapy dog, an emotional support dog, or a mental health service dog. Here’s the difference: therapy dogs provide affection to people in stressful situations, disaster zones, nursing homes, hospitals and so on. They typically work with an entire group of disenfranchised people, moving from person to person. Emotional support dogs, on the other hand, have a bit more training, focusing more exclusively on their owners and keeping them on task. The elite pups are the mental health service dogs. These dogs get special, individualized training tailored to help them work with one person in particular who suffers from a disabling mental disorder.

Dogs for autistic kids differ yet again from other service dogs in that they not only support their charge (the autistic child), but they also interact widely with the public.2 Most other service dogs receive training to focus solely on their owner or the person they are helping, without reacting to attention from strangers. In the case of autism-support dogs, though, the opposite is true. It’s important that people pet the dog and expose the autistic child to a wide range of interactions.

Apparently, the strategy works, at least according to a new study of 260 French children just published in the journal PlosOne. The study found that those autistic kids who got a dog after their fifth birthday showed substantial improvement in their ability to offer comfort to others and to share with others. If the child had the dog from birth or at an age earlier than five, it didn’t seem to make any difference. The study authors hypothesize that the reason is that after age five, the child has the ability to recognize the importance of the new addition to the household. Interestingly, by the way, the study found no difference in improvement between those autistic children who received specially trained autism-support dogs versus those who received any old hound from the pound.3

One of the main ways service and therapy dogs have been used with success is to support people suffering from post-traumatic stress disorder, or PTSD. In fact, the US Department of Defense has conducted studies to assess the impact of therapy dogs on war veterans.4 According to Dr. Melissa Kaime, who oversees the Congressionally Directed Medical Research Program (CDMRP), “A recent survey showed that 82 percent of patients with PTSD who were assigned a dog had a decrease in symptoms, and 40 percent had a decrease in the medications they had to take.”

The PTSD therapy dogs receive training to observe when their “person” starts to experience symptoms.5 “If a dog observes when a person with PTSD is escalating,” says Gibbon Esnayra, president and founder of the Psychiatric Dog Service Association, the dog will be able to signal that they are escalating and, given it’s so early in process, the person can manage and even prevent the escalation.” For instance, if the owner has a nightmare, a PTSD assistance dog would lick the owners face and tap a paw on his chest until he wakes up.

As Viet Nam war veteran and PTSD sufferer Raymond Galmiche explains, “I can talk with just about any social worker, counselor, my closest friend, a psychologist, and as much as they can get it … the dog looks in my eyes and seems to understand what my real basic need is. It’s that self-worth that makes me feel a private pride, something that I thought I’d lost a long time ago.”

It’s either a sad statement on the effectiveness of most therapists or else a tribute to the extraordinary capabilities of canine helpers that at least some dogs do, in fact, seem to “get it” better than their human counterparts. In fairness, though, at least some of that dog therapy benefit may be biochemical. Research shows that simply petting a dog increases the level of oxytocin in the brain, a chemical that reduces fear and increases feelings of wellbeing. It seems fair to point out, given that so many people attempt to alter their disturbed brain biochemistry by taking antidepressants, that dogs deliver a biochemical boost without side effects typical of the pills — no nausea, headache, loss of libido, blurred vision, possible suicide and the like. The worst side effects dogs deliver tend toward excess fur on the clothing and puppy saliva on the face.

But while the dogs may help humans heal their mental distress, what happens to the dogs? Some experts worry that exposing Rover constantly to depressed, agitated people can give the dog the blues. They say that canines deserve a home where they live with emotionally balanced individuals and that it’s exploitive to send dogs into homes to be used as medicine.  In fact, veterinarians now routinely prescribe antidepressants for dogs suffering from depression, separation anxiety, and other psychological symptoms, and certainly therapy dogs might be candidates. Perhaps future research will take a look at this conundrum.6

In the meantime, it appears that there might be a career niche on the horizon for professionals who can simultaneously treat the agitated or depressed patient and his agitated, depressed dog.