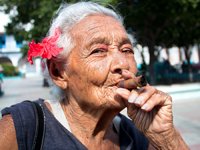 Let’s face it, we live in a very appearance-oriented society.  Almost everyone wants to look younger and more attractive.  Rather than taking a natrual anti aging route, many people will go to extremes to enhance their appearance, buying all kinds of pricey products or even undergoing chemical peels or plastic surgery in an attempt to stave off the signs of aging.  However, sometimes it is a heck of a lot easier to just take preventive measures so your skin is healthier to begin with.  One major case in point: Don’t smoke.  In addition to all the other ways it is bad for you, now there is new evidence linking smoking to the premature aging of facial skin, which pretty much confirms what we’ve all known for years.

A new study that took place at Case Western Reserve University in Cleveland, Ohio, focused on twins to determine that smoking can truly make a difference in the way a person looks by hastening the signs of aging.1 Almasy, Steve. “Twins study shows smoking ages your face faster.” CNN. 1 November 2013. Accessed 4 November 2013. http://www.cnn.com/2013/10/31/health/smoking-aging-identical-twins   The subjects were 79 pairs of twins, ranging in age from 18 to 78.  They were all attending an annual twin festival in the town of Twinsburg, Ohio.

The researchers had a professional photographer take a picture of each twin individually. The photos were then assigned to one of two groups. The first group contained the images of 45 sets of twins in which one of them was a smoker and one was not.  The second group consisted of images of the remainder of the sets of twins, all of whom smoked, but in these cases one of the twins had picked up the habit at least five years earlier than their sibling had.

The pictures of the participants were then shown to two physicians and a medical student, who estimated their ages based solely on the appearance of a face.  For the subjects in the first group, in which one twin smoked and the other didn’t, the smoker was believed to be older 57 percent more often.  And in the second group, even though both of the twins were smokers, the length of time they had smoked was important. Those twins who had been smoking for several years longer were tagged as older in 63 percent of the cases. That means the changes that occur to one’s appearance—lines, bags under the eyes, loose skin—begin to develop within a few years, not after decades of heavy smoking.

A number of other factors were considered that might undo natural anti aginge efforts and add years to a person’s face, such as skipping sunscreen application, alcohol use, and stress and anxiety levels, which were all fairly comparable between pairs of twins.  There were, however, some other potential differences that were not considered, including dietary habits and socioeconomic circumstances.  But even with these types of issues possibly influencing the addition of lines, wrinkles, and the like, there was still highly visible, side-by-side evidence of an association between smoking and looking older.

This should come as little surprise to anyone, since plenty of earlier research has shown that smoking has negative effects on the skin.  In fact, a study from way back in 1971 at the University of California found that wrinkles were much more prevalent in smokers than non-smokers from the age of 30 on.  And by their 40s, smokers frequently had as many wrinkles as people two decades older who didn’t smoke.2 Daniell, Harry W. “Smoker’s Wrinkles: A Study in the Epidemiology of ‘Crow’s Feet’.” Annals of Internal Medicine. 1 December 1971. Accessed 5 November 2013. http://annals.org/article.aspx?articleid=685985   Not to mention the stained teeth and bad breath the habit causes.

What it all adds up to is one more drawback to being a smoker.  Maybe this is enough proof to give the more vain among us the impetus they need to finally make a full-on effort to quit.  It’s hard to fathom why anyone would want to start smoking these days, with all of the copious health reasons not to, from an increased risk of several types of cancer to emphysema to dementia.3 Rusanen, Minna; et al. “Heavy Smoking in Midlife and Long-term Risk of Alzheimer Disease and Vascular Dementia.” JAMA Internal Medicine. 25 October 2010. Accessed 5 November 2013. http://archinte.jamanetwork.com/article.aspx?articleid=226695   But we do know that nicotine is very addictive and quitting is tough.  So we won’t judge your motivation if you are ready to give up tobacco.  Just focus on the task at hand and after a few weeks, you will be looking and feeling better than you have in a long time.

And for more on skin health and how to slow down the sands of time, check out Jon Barron’s article on Skin Health and Skin Physiology.