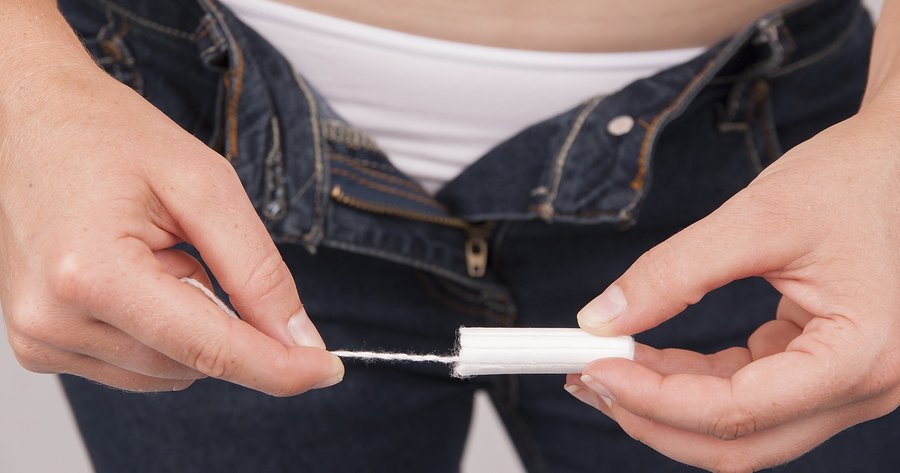 If ever there was a case of ignorance being bliss, it might well pertain to tampons. When that messy time of month comes, up to 85 percent of women in the US opt to use tampons instead of sanitary napkins, desperate to do whatever they can to make the experience less miserable. They don’t stop to wonder what’s actually in those convenient little absorbent inserts. The average woman will have used at least 12,000 tampons by the time she reaches menopause.1 Kounang, Nadia. “What’s in your pad or tampon?” 13 November 2015. CNN. 18 November 2015. http://www.cnn.com/2015/11/13/health/whats-in-your-pad-or-tampon/ That adds up to a lot of exposure to tampon components in a very sensitive area of the body, and the problem is that ever since researchers connected the dots in the 1970s to recognize the connection between tampons and toxic shock syndrome, evidence has been accumulating that sanitary products might pack a poisonous punch.

While tampons no longer contain the particular synthetic material that scientists believe triggered toxic shock syndrome-cases of toxic shock have declined dramatically-they still contain other worrisome components, including additives that may be harmful to health.  What are those other additives? Therein lies the rub: the industry refuses to release information about what’s really in their products. The truly frightening thing is that legislation has been introduced nine times requiring that manufacturers disclose tampon components (including any contaminants, fragrances, preservatives and so on), but the proposed bills have been defeated each time, and none ever made it past the house floor. Somebody doesn’t want the truth about tampons leaked, it would seem. The proposed legislation also called for the National Institutes of Health to conduct research on the health effects of both tampons and sanitary napkins, something that has not been done to date.

Why does the legislation keep getting defeated? For one thing, the manufacturers hide behind the fact that the FDA considers sanitary products medical devices (yes, really), and medical devices don’t need to disclose ingredients according to FDA policy.2 “Detox the Box.” Women’s Voices for the Earth. 18 November 2015. http://www.womensvoices.org/avoid-toxic-chemicals/feminine-care-products/hall-of-shame/ Of course, you’ve got to wonder why tampons and sanitary napkins are in the medical device category in the first place. Even more, though, you might wonder why manufacturers adamantly refuse to disclose product components unless doing so might scare off consumers.

By the way, it isn’t as if sanitary napkins are the Holy Grail in comparison to tampons. In fact, recent tests on Always pads by the research group Women’s Voices for the Earth (WVE) found that the pads emit styrene, a component in car tires which is a known carcinogen and hormone disrupter. The researchers also found traces of chloroethane, acetone, and chloroform. Chlorethane, also used in petroleum refining, is suspected of having neurological effects, including causing unconsciousness according to the Centers for Disease Control. Acetone is a key ingredient in nail polish remover. Oh, and there were pesticide residues, too, most likely from the non-organic cotton.

In response to these results, the company that manufactures Always pads–P&G, which also manufactures tampons–said that the level of these contaminants is so low that there should be no worry about them, and also, these contaminants exist in the ambient air, so there’s no problem. Other industry heavy hitters joined in dismissing the findings.

“There is more styrene in strawberries than there is in the air sample they measured in this study,” said Tucker Helmes, who represents the Center for Baby and Adult Hygiene Products. But the fact is that we’re not talking about a single exposure, and styrene is just one of a soup of unknown toxins that might well be present.

Tampons are most likely worse than sanitary napkins for several reasons. For one thing, they sit closer to the skin, and the skin in the vaginal canal is extremely thin and absorbent, so whatever is in the tampons can easily enter the bloodstream. Also, there are perhaps even more mystery ingredients in tampons.

A few years ago, WVE published a report called “Chem Fatale,” which claimed that tampons and other sanitary products contained pesticides, dyes, and dioxin, a carcinogen.3 Kiesel, Laura. “Toxic tampons: how ordinary feminine care products could be hurting women.” 22 December 2013. Salon. 18 November 2015. http://www.salon.com/2013/12/22/toxic_tampons_how_ordinary_feminine_care_products_could_be_hurting_women/ The World Health Organization considers dioxin particularly noxious as it doesn’t break down in the environment, and previous tests found dioxin in numerous brands of tampons.  While the companies may point to fact that dioxin levels are microscopic, an EPA report in 2012 concluded that “dioxins could have “potentially serious [health] effects at ultra-low levels of exposure.” Again, tampons are probably more dangerous than napkins because they come in more direct contact with the skin in an extremely absorbent area of the body.

The manufacturers, meanwhile, say that “rumors” about tampons being contaminated by dioxins and asbestos are false. “Kimberly-Clark’s U by Kotex tampons are manufactured by a process that is both chlorine and dioxin-free,” says spokesperson Bob Brand. “However, since dioxins can be found in the environment, Kimberly-Clark regularly tests for dioxins to ensure the safety of our products.” Of course, the companies can claim whatever they want given that they’re under no obligation to disclose the truth. In any case, the FDA has backed up their contention.

The fact is that Kotex tampons and Tampax by P&G still contain rayon, and dioxin is a byproduct of rayon manufacture. It’s certainly suspicious that while both companies are required by law to track the dioxin content in their products, both have refused to make their findings public. Who knows–it may turn out that the trace amounts of dioxin in tampons are negligible, but as Philip Tierno of NYU School of Medicine points out, “Sure one tampon is trace, but consider the menstrual lifetime of a woman. They use approximately 12,000 tampons in a lifetime. That means 12,000 exposures of dioxin … five, six, seven times a day. That’s a lot of dioxin absorbed directly through the vagina. It goes directly into the blood.”

What are the lifelong effects of such negligible exposures? It’s hard to track the health impacts without conducting extensive research, and as mentioned above, to date, no such research has been initiated—at least none that was ever published.

Perhaps in an effort to quell some of the fuss being raised after WVE demonstrated in front of Proctor & Gamble Headquarters last month asking for full disclosure, the company finally listed tampon ingredients on its website, and then Kimberly-Clark followed suit. But the disclosure is about as complete as confessions from teenagers who admit they “went out,” but not saying where or with whom. For instance, “U by Kotex Light Days” lists “superabsorbent material” as one of the ingredients, without mentioning just what that material consists of.4 http://www.productstewardshipatkc.com/ourbrands/kotex   As Alexandra Scranton from WFE says, “Is it rayon or cotton or both? What are the ‘fiber finishes’?” There’s no mention of pesticide residues, fragrance ingredients, or manufacturing byproducts. One does have to wonder. If there’s nothing in them that’s problematic, why wouldn’t the companies publish that fact? It would be good for business. On the other hand, if there are questionable components, they would have every reason to keep that secret. And just to be clear: they are keeping whatever is in their products a big secret.

Dr. Tierno sums up the issue well: “Every single product contained in a tampon has to be researched. We already know the fibers contain dozens (of chemicals), polyester contains hundreds of chemicals. It’s not just a fiber you put in the vaginal vault.”

Given our ignorance about what tampons and other sanitary products actually contain, experts advise women to use the lowest absorbency product possible, to remove tampons as soon as possible, and to avoid scented products. If you’d like to know what’s inside your tampon before you insert it next time, you can get in touch with the Detox the Box campaign to try to bring manufacturers to the full-disclosure table.5 http://act.myngp.com/Forms/-5451061322275813376