Are You Allergic to Your Partner? 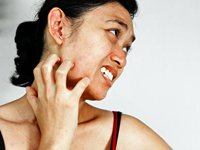 Imagine that you’ve just found the mate of your dreams, someone who “gets” you, laughs at your jokes, gives you affection and respect, and whose physical presence makes you go weak in the knees. All the pieces seem to be in place for a long and happy relationship–and then you sleep together. The passion certainly is there, but afterwards, she swells up and feels like her privates are on fire. It happens the next time, too, dashing your romantic hopes and leaving you wondering what’s going on. Sound impossible–or like a one in a billion shot? Think again.

Up to 40,000 women in the US alone have a condition known as “seminal plasma allergy,” which means they’re allergic to their partner’s sperm.1 James, Susan Donaldson. “Allergy to Husband’s Sperm Was Game-Changer in Marriage.” 10 April 2012. ABC News. 11 April 2013. http://abcnews.go.com/Health/allergy-sperm-game-changer-marriage/story?id=18916973#.UWdi6zfp_kc Or more accurately, they’re allergic to a particular protein in their partner’s sperm. These women aren’t necessarily allergic to the sperm of every man. It’s just one particular protein in that one particular man’s semen that they react to. The woman’s symptoms can be minor or severe, depending on the intensity of the sperm allergy. Localized symptoms include pain, itching, and raw, burning skin in the vaginal area, but the symptoms also can be systemic, including abdominal swelling, wheezing, diarrhea, dizziness, shortness of breath, hives, and complete loss of consciousness.2 “Seminal Plasma Allergy.” 11 April 2013. http://www.seminalplasmaallergy.org/index.php Yes–the sperm allergy can cause passing out right after lovemaking–but not like you read about in romance novels. The symptoms tend to get worse over time, progressing to the point where they can even become life-threatening.

Most women who have seminal plasma allergy have other allergies as well. They don’t necessarily start out allergic to their partners, but over time, sensitivity develops. It can take months or even years for the allergy to kick in. The allergic reaction doesn’t prevent pregnancy, as long as the woman can stand the side effects well enough to engage in intercourse.

The good news is that the condition can be controlled through a process of desensitization. To accomplish this, the patient undergoes allergy testing to isolate the troublesome protein. The next step is a series of injections, timed about 15-20 minutes apart over a two to three-hour period.  The injections consist of dilute semen–including the protein–from the male partner. After the injections, the couple has to have intercourse within twelve hours or the desensitization won’t work. In fact, they must have intercourse at least a few times a week from that point going forward or the effects will wear off. The more sex, apparently, the better the results. No, really! That’s part of the therapy.

Usually, the procedure leads to complete tolerance, assuming the couple does their homework. The entire process, from testing through injections, takes about three days, and it’s no bargain. Insurance doesn’t necessarily cover it, and the price tag runs about $4,000. On the other hand, it usually works, so it can be a relationship saver.

The process is similar to one used to desensitize patients who have bee allergies, minus the sex part. It’s a method known as immunotherapy. According to the Asthma and Allergy Federation of America, the approach works 97 percent of the time for bee stings, but it’s necessary for the patient to continue getting shots for at least three to five years.3 More, Daniel, MD. “Bee Sting Treatment.” 14 September 2011. About.com. 11 April 2013. http://allergies.about.com/od/insectallergies/a/venomallergy_3.htm That makes the one-day treatment for semen allergy look like a walk in the park. For people who have had particularly severe reactions to bee stings, the regimen is far worse. They may need to continue getting the shots for their entire lives. The bee sting treatments cost up to around $4000 the first year, plus another $1000 for allergy testing. The cost goes down in subsequent years, but it nevertheless still will run a few thousand annually.

But back to sperm. Although semen sensitivity is far more common than typically assumed, most medical professionals don’t think of it when women present with vaginal burning and hives. Typically, their symptoms are attributed to a yeast or vaginal infection and treated accordingly. If that doesn’t fix it, there are many other conditions that share some of the symptoms of sperm allergy–at least the localized symptoms–including pelvic inflammatory disease, lice, cellulitis, and vaginal dryness.

Even if the doctor does suspect that the patient has an allergy, she might target the wrong source. She’d be more likely to suspect that the patient is reacting to a spermicide, if the patient uses one. Spermicides also can cause burning and hives, and about three to five percent of all women experience these symptoms as a result of using the most common spermicide, Nonoxynol 9.4 Wolf, Nicole. “Nonoxynol 9 Allergy Symptoms.” 31 March 2011. Livestrong.com. 11 April 2013. http://www.livestrong.com/article/170051-nonoxynol-9-allergy-symptoms As with semen allergy, the reaction to spermicide can be quite serious–and even fatal.

Another sex-related allergy that causes similar symptoms can arise from using condoms or diaphragms that contain latex. Given that five percent of the general population is allergic to latex (make that 15 percent among health-care workers), it’s a relatively common problem.5 http://www.latexallergyinfo.com Plus, frequent exposure to latex can cause a new allergic reaction to develop, so that people who aren’t allergic to latex to begin with can develop an allergy over time if they wear latex gloves–or condoms–every day.