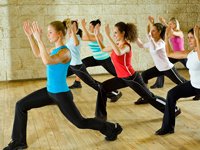 Breast cancer is a frighteningly common disease.  Most of us can count several friends and relatives who have fought it and hopefully survived.  With statistics showing that one out of every eight women will develop breast cancer at some point in their lives, it is essential to do what we can to lower our breast cancer risk.1 “Breast Cancer Overview.” American Cancer Society. 22 February 2013. Accessed 16 April 2013. http://www.cancer.org/cancer/breastcancer/overviewguide/breast-cancer-overview-key-statistics   Now, new research has added another piece to the puzzle to help us understand just why exercise might help women in the prevention of breast cancer.

A study that took place at the United States National Cancer Institute in Bethesda, Maryland, provides some important insight into how exercise works to stave off breast cancer.2 Doheny, Kathleen. “New Clues to How Exercise May Reduce Breast Cancer Risk.” U.S. News. 9 April 2013. Accessed 15 April 2013. http://health.usnews.com/health-news/news/articles/2013/04/09/new-clues-to-how-exercise-may-reduce-breast-cancer-risk   The findings show that post-menopausal women who do a greater amount of physical activity and aerobic training have lower estrogen levels.  The participants were 540 Polish women between the ages of 40 and 74.  All of them were part of the control group within the National Cancer Institute’s Polish Breast Cancer Study, and none had been on a hormone replacement regimen.

The subjects took part in various forms of exercise and were monitored for one week. They wore an accelerometer throughout their waking day to measure the time spent doing physical activity and its intensity.  In addition, urine samples were provided twice a day during this period.  The urine was analyzed for estradiol and estrone hormones, which are two of the major forms of estrogen found in a woman’s body, and 15 different estrogen byproducts, or metabolites.  More physical activity on the part of the women was linked to a reduced presence of estrogen hormones and a more substantial metabolism of the byproducts.

This study confirms a 2012 study at the University of North Carolina at Chapel Hill, which found that a woman’s breast cancer risk can be decreased with regular exercise and aerobic activity.  Those who benefited most were the women who worked out for between 10 and 19 hours per week, even if they were mainly performing light activity such as walking.3 Jaslow, Ryan. “Breast cancer risk reduced 30 percent in women who exercise 10 hours per week.” CBS News. 25 June 2012. Accessed 16 April 2013. http://www.cbsnews.com/8301-504763_162-57459695-10391704/breast-cancer-risk-reduced-30-percent-in-women-who-exercise-10-hours-per-week The design of the current study provides a more detailed picture of how this happens.  The accelerometers offer a far more honest and exact method of determining just how much activity a participant is actually doing than the self reporting used in many studies.  And by measuring the hormones and hormone byproducts in the urine, changes in the levels found can be accurately tracked during exercise as well as sedentary hours.

Hormones and the way our bodies process them play a very important role in certain forms of cancer and other diseases.  In fact, approximately two-thirds of all cases of breast cancer are found to be hormone receptor positive, which means the malignant cells are likely receiving signals from hormones such as estrogen and progesterone that influence their growth.4 “Hormone Receptor Status.” Breast Cancer. 17 September 2012. Accessed 16 April 2013. http://www.breastcancer.org/symptoms/diagnosis/hormone_status And in post-menopausal women especially, exercise can help in weight loss, reducing the stores of fat that tend to accumulate more easily as we age.  These pockets of fat tissue have been linked to increased estrogen production, which elevates breast cancer risk.

The high-fat diets so common in the United States not only promote weight gain, but are often sources of hormones themselves.  Commercial meat and dairy products are typically full of synthetic estrogens that have been given to the livestock.  These chemicals then end up in the bodies of the consumers, adding more excess hormones.  And it’s a nasty cycle, because the hormones promote fat in post-menopausal women, then the extra fat ups estrogen levels even more.

Exercise can disrupt this sequence of events and help restore a healthier, more natural balance.  Its benefits can extend beyond reducing the risk of developing breast cancer, also conferring some protection from a variety of conditions such as diabetes and heart disease.  It is important not only to get moving, but to regularly practice a multitude of types of exercise.  Aerobic/interval training activity will strengthen the heart; weight training will develop muscle tissue and increase metabolism; and flexibility workouts will also tone the muscles and improve breathing techniques.  A combination of routines done daily will help you lose weight and stave off much of the bodily damage that can lead to diseases such as breast cancer.

Note: one potential adverse effect of lowering estrogens in postmenopausal women might be a decrease in bone density. But a 2004 study showed no decrease in bone density in exercisers from baseline to 12 months and no difference in changes in a year between exercisers and controls.5 Anne McTiernan, Shelley S. Tworoger, Cornelia M. Ulrich, et al. “Effect of Exercise on Serum Estrogens in Postmenopausal Women: A 12-Month Randomized Clinical Trial.” Cancer Res April 15, 2004   64;  2923.  http://cancerres.aacrjournals.org/content/64/8/2923.full In other words, with moderate exercise, you get the best of both worlds.