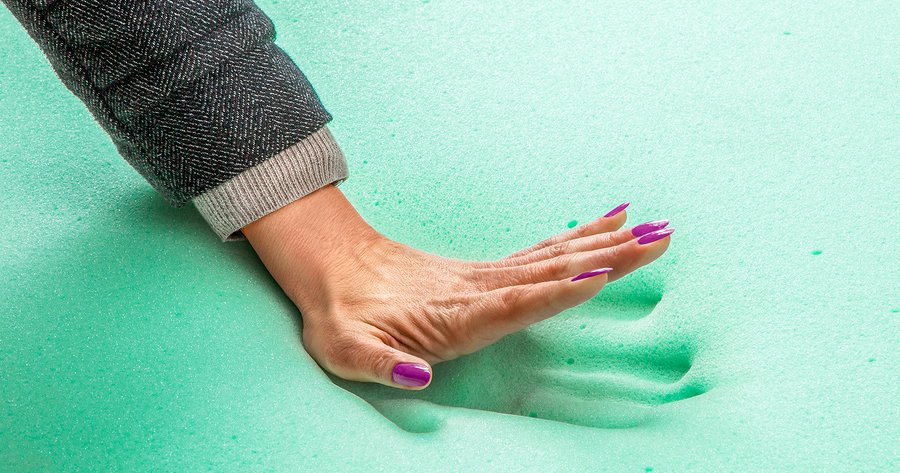 If you’ve ever shopped for a mattress, you know how gnarly the process can be. First of all, manufacturers sell the same mattresses under different names to each outlet, so you can’t know if the Pillow-soft Sealy at Macy’s is the same thing as the Regency Comfort at Mattress World, rendering price and quality comparisons impossible. Plus, mattress salespeople can be even more aggressive than their car sales counterparts, willing to say anything to loosen your wallet. They’ll wax poetic about spring density and foam layers, about thickness and softness and about how all your back problems will disappear if only you fork over the $4000 for the top-of-the-line. What they don’t mention is that no matter the spring count or the comfort index, that pricey mattress might well make you good and sick.

Sick from a mattress? You bet. One of the main problems has to do with the composition of the mattress itself. Most mattresses these days are made from a toxic stew of components and then treated with toxic flame-retardant chemicals. That cozy-as-mittens memory-foam layer is particularly problematic. It’s made from high-tech polyurethane foam–a petroleum product–and then it has extra chemicals added to give it super density and viscosity.1 Swartzburg, Dick, D.C.  “Memory Foam Mattress Information, Comparisons, and Buying Tips.” MemoryFoamMattress.org. 8 July 2016. http://www.memoryfoammattress.org/ The more chemicals, the denser the foam. You know how the mattress stinks for a few hours or days or even weeks when you first get it home? That’s because the chemicals in the mattress are unstable. The mattress keeps emitting those volatile organic chemicals (VOCs) and changing its composition over time. It’s the chemical gasses that stink–thus the term “off-gassing.” And the chemicals that are off-gassed might well be harmful to your health.

Exactly what are those chemicals? It depends on the manufacturer, but according to the Lifekind Mattress Company, the typical memory foam bed is comprised of 61 chemicals. Some of those are innocuous, but unfortunately, others are not. One such toxic chemical is formaldehyde, often used in mattresses produced outside the US.2 Sarah. “Thirteen Scary Facts About Memory Foam Mattresses.” 23 May 2012. Lifekind Blog. 8 July 2016. http://www.lifekind.com/blog/thirteen-scary-facts-about-conventional-mattresses/ Formaldehyde also arises in US-made mattresses either as a byproduct of other chemicals, or in glue used to bind fibers together, or in flame-retardants. Formaldehyde is a known carcinogen linked to leukemia, nasal cancer, breast cancer, asthma, and allergies.3 Epstein, Samuel S. “Unrecognized Dangers of Formaldehyde.” June 1 2011. The Huffington Post.8 July 2016. http://www.huffingtonpost.com/samuel-s-epstein/unrecognized-dangers-of-f_b_804156.html Last year, a Harvard School of Public Health study found that men who work with formaldehyde products had triple the risk of ALS (Lou Gehrig’s Disease).4 Fox, Maggie. “Study Strengthens Formaldehyde Link to Crippling Disease ALS.” 13 July 2015. NBC News. 8 July 2016. http://www.nbcnews.com/health/health-news/study-strengthens-formaldehyde-link-crippling-disease-als-n391336

Formaldehyde, though, is just the tip of the iceberg in terms of the chemical stew. Most mattresses contain diisocyanates such as MDI and TDI, which may be carcinogenic and have been linked to respiratory disorders.5 “Memory Foam Mattresses: Are They Safe?” 23 March 2016. Sleep Junkie.9 July 2016. http://www.sleepjunkie.org/are-memory-foam-mattresses-safe/ Other common chemicals used in mattress production include the suspected carcinogens methylene dianiline, vinilideine chloride, methylene chloride, and dimenthyl formamide. There’s also methyl benzene, a nervous system disruptor. The risks from these chemicals are mostly from exposure during off-gassing, but gasses usually are still emitted at low levels even years later as the mattress breaks down.

Keep in mind that even innerspring mattresses might have a memory foam component. If they don’t, that hardly means they’re safe. Both memory foam and innerspring mattresses get sprayed with flame retardants, and that’s a big problem. Flame retardants in general have a worrisome history health-wise–think asbestos. Among the more common varieties used today are chlorinated tris (TDCPP), which is a possible neurotoxin, endocrine disruptor and carcinogen; Modacrylic fiber, another carcinogen, and Melamine resin, which contains formaldehyde.

Are all mattresses equally toxic? Actually, they can vary dramatically. The problem is that if you want to know exactly what’s in that mattress you’re thinking of buying, you’re up a creek. Manufacturers are not required by law to disclose the chemicals they use in making beds, and the big producers protect their formulas as “trade secrets.”6 Wallace, Hannah. “Should You Ditch Your Chemical Mattress?” March/April 2008. Mother Jones. 9 July 2016. http://www.motherjones.com/politics/2008/03/should-you-ditch-your-chemical-mattress

In fact, even when manufacturers seem to be transparent, you need to look carefully to make sure there isn’t deception in their advertising. For instance, the Simmons Beauty Rest website says, “Breathe easy. We use only CertiPUR-US® certified foams in every product we make, which means they’re free of formaldehyde, flame retardants, prohibited phthalates and heavy metals and also meet low-VOC standards for indoor air quality.” 7 http://www.beautyrest.com/Why-Beautyrest/Quality

Sounds great, right? Those standards do make Simmons mattresses healthier than some brands, but pay close attention to the wording in the above boast. Notice that it doesn’t say what actually is in those mattresses. Notice also the phrase “low-VOC standards.”8 Dadd, Deborah Lynn. “Simmons BeautyRest Mattresses are Free of Some Toxic Chemicals, But Not All.” 4 May 2014. Deborah Lynn Dadd, Consumer Advocate. 9 July 2016. http://www.debralynndadd.com/q-a/simmons-beautyrest-mattresses-are-free-of-some-toxic-chemicals-but-not-all/ What that means is that the mattresses do, in fact, emit VOCs, just not in quantities that exceed federal standards. You’re still getting the poison, and worse, you don’t know what type of poison you’re being exposed to, because it isn’t listed. Also, the claims are a little misleading. Phthalates are banned in the US anyway, so no mattresses can contain them, and mattresses don’t typically contain heavy metals.

If you’re thinking you can rush out and get an organic or low-VOC alternative, you might want to do some good research. As noted at the start of this blog, mattress salespeople are notorious, and apparently, there are plenty of false claims made by manufacturers, including by manufacturers of supposedly safer, organic products. That’s why the Federal Trade Commission sued several companies (Essentia, Relief-Mart/Temp-Flow, and Ecobaby Organics) over their claims that they made VOC-free mattresses, when the mattresses did not test VOC-free at all. Also, the Tempurpedic Company recently was sued for wrongly claiming its mattresses were formaldehyde and VOC-free.

Manufacturers argue that the VOC levels in mattresses are so low that there’s nothing to worry about. But at least some experts aren’t so sure. For instance, Heather Stapleton, an environmental chemist at Duke University, says, “It’s the dose that makes the poison. If [the chemicals are] not getting out, maybe it’s not a problem–but we don’t know. There are plenty of lab studies that show that these compounds are harmful. It’s just a question of what levels people are exposed to.”

If you’d rather be safe than sorry about your sleeping choice, you might want to opt for a latex-based product with cotton and wool, but do your research. And then, of course, for those who don’t care about money, there’s the Hastens top-of-the-line, natural mattresses that have no foam and that carry the Oeko-Tex Standard 100 certification, which means they’re independently certified, toxin free.9 http://www.hastens.com/en The catch is that they’re priced at $99,000–with an entry level version still topping $13,000. Sweet dreams are made of these!