Sleeping in Makes for Safer Drivers 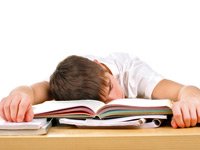 As frustrating as it might be to wait for your teenager to roll out of bed at noon on a weekend morning, letting them get that catch-up sleep is actually very important.  Not only is getting some extra slumber time good for the health, it may prevent these new drivers from getting into a serious accident.  Recent research has found that getting a little weekend sleeping boost can lower the risk of car crashes in drivers under the age of 25.1 Reinberg, Steven. “‘Catch-Up’ Sleep May Cut Young Drivers’ Crash Risk.” WebMD. 20 May 2013. Accessed 27 May 2013. http://www.m.webmd.com/sleep-disorders/news/20130520/weekend-catch-up-sleep-may-cut-young-drivers-crash-risk.

The study, which took place at the George Institute for Global Health in Sydney, Australia, showed that just a few hours more sleep during the weekend mornings can reduce the chances of these newer drivers having a car accident at night, when the stress and anxiety of exhaustion begins to take over.  The experiment focused on more than 20,000 licensed drivers between the ages of 17 and 24.  The participants all answered questions about their typical sleep habits.

The subjects who admitted to generally getting six hours of sleep per night or less were found to have a 21 percent greater risk of crashing their car than their peers who regularly sleep for longer than six hours a night.  So the overall quantity of sleep these young drivers are getting appears to make a big difference in their safety on the road.  But even more significant was the difference between the teen and young adult drivers who get to catch up on sleep over the weekends versus those who do not.  The drivers who do not sleep in for some extra shut eye on the weekends faced a 55 percent higher risk of being in a single-car accident, caused by the car veering off the road and hitting a tree, guardrail, or some other obstacle in its way.  While this at least excludes others from harm’s way, this type of accident is often a result of drivers falling asleep at the wheel.

Falling asleep while driving is a major problem these days for people of any age. In fact, a 2010 study conducted by the AAA Foundation for Traffic Safety in Washington, DC, determined that 16.5 percent of fatal crashes occurred when a drowsy driver nodded off.2 “Asleep at the Wheel: The Prevalence and Impact of Drowsy Driving.” AAA Foundation. November 2010. Accessed 28 May 2013. http://www.aaafoundation.org/sites/default/files/2010DrowsyDrivingReport.pdf   In the current study, car crashes occurred at night in 86 percent of the cases.  That covered anywhere from 8 p.m. to 6 a.m., which makes sense since quite a bit of this time is typically spent sleeping.  The overnight hours are most dangerous for any driver,3 “Drowsy Driving and Automobile Crashes.” National Highway Traffic Safety Administration. Accessed 28 May 2013. http://www.nhtsa.gov/people/injury/drowsy_driving1/drowsy.html#III.%20CHARACTERISTICS%20OF%20DROWSY but young drivers have a few distinct extra disadvantages.  They are still relatively inexperienced drivers, which–when combined with excessive sleepiness–can slow reaction time and make the driver less aware of their surroundings.

Another problem lies in the fact that the majority of people this age are chronically sleep deprived.  As high school students, they often must arrive at school before 8 a.m. (Most adults start work at 9:00 a.m.)  In college, many students have to take early classes to accommodate heavy course loads or get to a job afterward. So between studying and doing course work, outside employment, socializing with friends, and spending time on various forms of social media, these young adults tend to stay up until well into the night. In addition, their circadian rhythms have gotten resynchronized during the teenage years to stay up later and sleep later as well, so that even if they are tired, they often have trouble falling asleep earlier in the evening.  A 2011 study at the Centers for Disease Control and Prevention in Atlanta, Georgia, found that more than two-thirds of teens get fewer than eight hours of sleep each school night, which makes them more likely to make some bad choices,4 McKnight-Eily, Lela R., et al. “Relationships between hours of sleep and health-risk behaviors in US adolescent students.” Preventive Medicine. October-November 2011. Accessed 28 May 2013. http://www.sciencedirect.com/science/article/pii/S0091743511002878 apparently including driving drowsy.

Since there are few options for realistically changing the schedules of these young drivers, the best way to keep them safe on the road may well be to remind them frequently to get catch-up sleep whenever they can.  Since sleeping late on the weekends whenever possible was found in this research to improve their accident statistics, getting those extra hours in may be well worth it.  It’s better to give a little more time to sleep than to face the consequences of a potentially serious car accident.