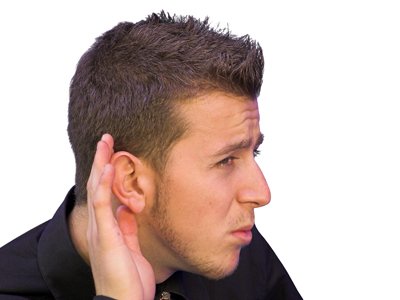 Sleep apnea is a serious condition. Beyond the fact that most sufferers snore loudly and often disrupt their partner’s sleep, they themselves are frequently awakened each night. That’s because sleep apnea causes a person to stop breathing numerous times during sleep, so they gasp for air and wake from a deep sleep. It is associated with high blood pressure, cardiovascular disease, abnormal liver function, and chronic daytime fatigue. If all of that isn’t enough to warrant those with sleep difficulties to want to be evaluated for sleep apnea, now research has found that it may affect your hearing as well.

The study, which took place at the pulmonary sleep lab at Montefiore Medical Center in Bronx, New York, discovered that sleep apnea appears to be linked to a loss of hearing.1 Bronson Gray, Barbara. “Could sleep apnea affect your hearing?” CBS News. 21 May 2014. Accessed 28 May 2014. http://www.cbsnews.com/news/could-sleep-apnea-affect-your-hearing The subjects were close to 14,000 participants in the Hispanic Community Health Study/Study of Latinos. Living throughout the United States, the volunteers averaged 41 years old, and slightly more than half were women. The scientists analyzed data collected from that study, including information obtained from in-home sleep studies and hearing tests conducted on every subject.

From these records, the researchers determined that approximately 10 percent of the participants were diagnosed with sleep apnea and approximately 30 percent were considered hearing impaired to some extent. Their calculations showed that having sleep apnea increased the chance of having a hearing loss in both the high and low frequency ranges. Broken down separately, sleep apnea was linked to a 31 percent rise in high frequency hearing loss and a whopping 90 percent rise in low frequency hearing loss. This type of impairment distorts sound and makes it much more difficult to clearly understand the speech of others, creating major communication issues.

The findings held true even after the scientists controlled for a number of factors, including age, gender, previously existing health conditions, smoking, alcohol use, prior noise exposure, and any previous history of hearing impairment. That said, certain differences, besides the diagnosis of sleep apnea, were also found to influence the likelihood of hearing loss as well. Those who had a high body mass index, snored regularly, and were of either Puerto Rican or Cuban descent faced a greater chance of having hearing impairment compared to others without these characteristics, according to the results.

While this study is limited to some extent by selecting only Hispanic participants, the population sample size is so large, and identifying as a Hispanic is such a broad category, that it would seem likely that the findings would hold up even with more diversity among participants. And it does make sense that, although causation was not established, there might be certain physical occurrences taking place that produce both the sleep apnea and the hearing loss. The researchers theorize that it might be due to several elements influencing each other, such as the development of inflammation and problems within the blood vessels that may resemble a disorder such as vasculitis, which can damage blood vessels anywhere in the body and is known to affect hearing.2 “What Is Vasculitis?” National Heart, Lung, and Blood Institute. Accessed 30 May 2014. http://www.nhlbi.nih.gov/health/health-topics/topics/vas/printall-index.html Another factor could be the volume of the snoring. Any sound over 85 decibels can be considered hazardous to your hearing if you are being exposed to that noise for long periods of time. For most people that’s not a problem as snoring averages 60 dB, but loud snoring can approach 80 to 90dB, and if exposed to that night after night, that could affect hearing.

Hearing impairment is not a condition to be ignored. There are many people who deny they are having trouble hearing and don’t want to wear a hearing aid, but research has shown that especially as we age, it is very important to optimize our hearing to its full potential. A 2011 study at Johns Hopkins University in Baltimore, Maryland, found that the worse a person’s untreated hearing impairment is, the greater their risk of developing dementia.3 Lin, Frank R.; et al. “Hearing Loss and Incident Dementia.” JAMA Neurology. 14 February 2011. Accessed 30 May 2014. http://archneur.jamanetwork.com/article.aspx?articleid=802291 And as we discussed in a previous blog, a study last year found that snoring, even in those without sleep apnea, caused a thickening of the carotid artery, which is responsible for supplying blood to the brain.

So, if treating sleep apnea might reduce the risk of hearing loss, you are killing two proverbial birds with one stone. But even better would be to take steps so that you never develop sleep apnea in the first place. Some of the major risk factors for sleep apnea are being overweight, using alcohol or other forms of sedatives, smoking, and chronic nasal congestion. All of these are within your power to change by making a few alterations to your lifestyle for a longer, healthier future. And if none of those things work, there are devices that can help: everything from smart beds to heavy-duty C-Pap machines.