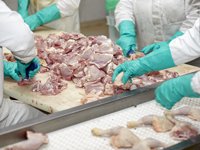 Last week, in a blog advising you not to wash chicken before cooking it, we made clear that something is dreadfully wrong in Chickenville, USA. We cited studies finding that “two-thirds of all chickens on supermarket shelves …hosted either salmonella, campylobacter, or both.1 Mertens, Maggie. “Tests Find Chicken Often Contaminated, but Better Than Before.” 30 November 2009. NPR. 30 August 2013. http://www.npr.org/blogs/health/2009/11/how_clean_is_your_chicken_prob.html We also mentioned that in 2012, “the Physician’s Committee for Responsible Medicine found that 48 percent of all chickens in their samples…tested positive for E. coli.2 Strom, Stephanie. “48% of Chicken in Small Sample Had e. Coli.” 11 April 2012.  New York Times. 30 August 2012. http://www.nytimes.com/2012/04/12/health/in-small-sample-e-coli-found-in-48-of-chicken-in-stores.html

You would think, given these statistics, that the USDA would take radical action to cut the contamination rate. Indeed, the Department has taken action, but here’s their proposal. They would like to radically cut back on the number of chicken inspectors stationed at poultry processing plants. They also would like to speed up production. Their plan, they say, will not only add healthy profits to the chicken industry—it also will ensure consumer safety.3 Nixon, Ron. “Changes to Poultry Rules Are Flawed, Report Says.” 4 September 2013. New York Times. 5 September 2013. http://www.nytimes.com/2013/09/05/business/changes-to-poultry-rules-are-flawed-report-says.html?ref=health Again, so they say!

Currently, the USDA stations four inspectors per production line. On each line, about 140 chickens get killed per minute, or 8400 chickens each hour.4 Philpott, Tom. “USDA Ruffles Feathers With New Poultry Inspection Policy.” 24 April 2013. Mother Jones. 5 September 2013. http://www.motherjones.com/tom-philpott/2013/04/usda-inspectors-poultry-kill-lines-chicken The four inspectors are charged with making sure there are no visual defects on the carcasses. In other words, they look for fecal matter, feathers, blood, bits of organs clinging to the skin, cancerous tumors, and other revolting irregularities. Certainly the challenge must be dizzying. Records indicate that when all four inspectors are on the job, they find, on average, that 67 percent of the chickens that have already been processed by line workers still have defects, with 90 percent of those errors being “visible fecal contamination that was missed by company employees.”

In spite of those dismal statistics, the USDA last year proposed to reduce the required number of inspectors to one per line. At the same time, they proposed speeding up production by 25 percent, so that 10,000 chickens would get slaughtered each hour. The line workers, they reasoned, could do the inspections themselves. Why waste money paying federal employees? Implementing this plan would save the USDA $90 million and the industry $256 million annually. In fact, the USDA says, they’ve been running a pilot program based on this model at 20 poultry processing plants since the late 90’s, with no “disastrous” consequences, and they say they have research to show just how effective the streamlined approach is.

It seems obvious that removing inspectors and installing faster processing will not add up to cleaner chickens, so it’s hard to reconcile the USDA claim that their plan will reduce instances of salmonella by 5000 annually. In fact, it would be impossible to reconcile, but for the fact that the USDA has a trick up its sleeve. Instead of “wasting time” inspecting the chickens, the plan calls for workers to spray the chickens with toxic chemicals to get rid of the bacteria nesting in them. Also, the workers will pull random chickens off the line—albeit less than .01 percent of those being processed—and send them for testing after spraying them with the chemicals.

Again, the USDA claims its pilot program has been a success to date, but not everyone believes it. In fact, the Government Accountability Office (GAO) just issued a report questioning the USDA’s judgment in going forward with the plan, which is expected to be implemented in September of 2014. The author of the GAO report, Senator Kirsten Killabrand of New York, wrote, “… the proposed rule is not formulated on a strong scientific basis and assumptions made in the proposed rule may not be correct…[it is important to] ensure the significant flaws in USDA FSIS’s proposed rule can be addressed before further action is taken.”

Apparently, the USDA argument that the plan will reduce contamination is based on two studies, one nine years old, and the other completed 20 years ago. In fact, a 2011 report issued by the USDA itself found increased instances of salmonella at the pilot facilities, compared to better-staffed factories.5 “Evaluation of HACCP Inspection Models Project.” August 2011. United States Department of Agriculture. 4 September 2013. http://www.fsis.usda.gov/shared/PDF/Evaluation_HACCP_HIMP.pdf

Meanwhile, as production speeds up, the processing plants have been relying ever more on chemicals—increasing both the strength, the proportion, and number of chemicals in the mix–to take care of contamination. Right now, the proposed plan calls for all carcasses—whether contaminated or not–to be sprayed with a solution containing chlorine and peracetic acid as well as other antimicrobials.6 Kindy, Kimberly. “Chemicals in Poutry Plants Raising Health Concerns. 5 September 2013. Seattle Times. 23 April 2013. http://seattletimes.com/html/health/2020862149_poultrychemicalsxml.html These chemicals are known toxins that can cause problems ranging from cancers and organ damage, to death. Surprisingly, their use is allowed even now in the processing of organic chickens.7 Miles McEvoy. “National Organic Program Notice to StakeHolders and Interested Parties.” USDA National Organic Program. 6 May 2011. (Accessed 5 Sept 2013.)  http://www.ams.usda.gov/AMSv1.0/getfile?dDocName=STELPRDC5090764 (And this is hardly the first time the USDA has stretched the definition of organic.)

Retired USDA poultry inspector Phyllis McKelvey says, “They don’t talk about it publicly, but the line speeds are so fast, they are not spotting contamination, like fecal matter, as the birds pass by. Their attitude is, let the chemicals do the work.”

If the proposed regulation goes through, new and far stronger chemicals will be added to the mix, and again, all chickens will be subject to spraying. Already, workers at poultry processing plants have been filing complaints about illnesses contracted due to chemical exposure, and OSHA has been conducting an investigation. Workers are at greatest risk since they are around the chemicals all day, but obviously, some chemical residue is bound to cling to the chicken, putting consumers at risk, too and compromising a healthy immune system. In other words, the spray may kill the salmonella on your chicken, but it may then trigger tumors in you. Add to that conundrum the fact that we’ve been told not to wash chicken–but cooking will not destroy the chemical agents that have slipped into your cacciatore.

Experts say that the USDA hasn’t conducted studies to determine the potential effects of the chemical residue on consumers. Instead, the Agency relies on safety reports from chemical manufacturers.

No worries, though. If you really must have your chicken dinner included in your balanced diet, you now can skip the whole problem of buying questionable “made in America” poultry. The USDA, a few days ago, passed regulations allowing for prepared chicken to be imported from China, and experts assume it won’t be long before China sends us raw chicken, too.8 Strom, Stephanie. “Chinese Chicken Processors Are Cleared to Ship to the US.” 30 August 2013. New York Times. 5 September 2013. http://www.nytimes.com/2013/08/31/business/chinese-chicken-processors-are-cleared-to-ship-to-us.html Now there’s an option for you if you aren’t concerned about Avian flu, given that China has had frequent outbreaks.

How does a veggie burger sound right about now?