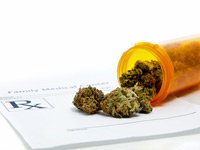 Along with the legalization of medical marijuana use in a number of states across America has come pain relief, a reduction in nausea, and other benefits for many patients with chronic ailments.  However, every coin has a flip side, and there are several issues cropping up due to the ready availability of marijuana now that should be on people’s radar.

One aspect of concern is the individuals who are providing their ailing pets with marijuana.1 “Medical marijuana for your pet?” Fox News. 31 May 2013. Accessed 6 June 2013. http://www.foxnews.com/health/2013/05/31/medical-marijuana-for-your-pet   While this may prove in the long run to be very useful in many instances, the fact of the matter is, that at this point, virtually no studies have been conducted to determine whether marijuana is effective or safe for household pets such as cats and dogs.  Nevertheless, there are marijuana products marketed as natural health remedies for pets, such as a glycerin tincture called Companion Cannabis that is available in some dispensaries where marijuana is legally sold.2 “Medical Marijuana for Pets Now for Sale.” Enlightened Veterinary Therapeutics. Accessed 7 June 2013. http://enlightenedveterinarytherapeutics.com/medical-marijuana-for-pets-now-for-sale

On the positive side, there is anecdotal evidence that medical marijuana can be helpful to animals in much the same way it may be for humans.  Veterinarians report hearing stories of pet owners medicating their beloved animals for a variety of ailments including noise phobia, separation anxiety, and even cancer.  It does make sense that medical marijuana could be used in the same manner for a terminally ill dog as it would be for a terminally ill person.  In people, marijuana has been shown to reduce pain levels, increase overall comfort, and substantially improve flagging appetites.3 “It’s True: Medical Cannabis Provides Dramatic Relief for Sufferers of Chronic Ailments.” American Friends of Tel Aviv University. 24 January 2013. Accessed 7 June 2013. http://www.aftau.org/site/News2?page=NewsArticle&id=17871   Stories on the front lines from pet owners tell similar tales about improving a dying animal’s quality of life and easing their suffering.

However, no one really knows if there have been instances of adverse reactions or fatalities due to a pet being given marijuana.  So far, the people who have come forward to their vets to report providing some of their cannabis to the family dog or cat have done so to describe its beneficial effects.  Not too many people would proudly share with their veterinarian that they accidentally got Fido really sick by sharing their marijuana with him.  Dosing is an issue too.  Even vets would probably have little concept of just how much marijuana could safely help a pet manage his symptoms effectively, much less a person with no training in veterinary medicine. It’s also extremely important to remember that animals are not people. They don’t necessarily respond in the same way to the same things as people. Both xylitol and chocolate are safely consumed by people; and yet both are highly toxic to dogs. Go figure.

And speaking of safety issues, another problem that has cropped up with the legalization of marijuana is its accidental ingestion by children.  As marijuana has gained a greater presence in a number of households that might not have had it before, there has been a spike (albeit quite small) in children who were sickened when they ate a marijuana product.  A study, which took place at Children’s Hospital Colorado in Aurora, found that young kids were ending up in the emergency room after ingesting some form of medical marijuana.4 Rochman, Bonnie. “More Kids Accidentally Ingesting Marijuana Following New Drug Policies.” Time. 28 May 2013. Accessed 7 June 2013. http://healthland.time.com/2013/05/28/more-kids-accidentally-ingesting-marijuana-following-new-drug-policies

The researchers pored over data on the ER visits of children under 12 years old who had come in due to poisoning or a questionable ingestion.  They separated these cases into two groups: between January 2005 and September 2009 (prior to when relaxed enforcement guidelines on marijuana use were enacted) and October 2009 through December 2011.  In the earlier time frame, the scientists couldn’t find any ER visits prompted by marijuana exposure in the 790 patients whose records they analyzed.  However, in the later time frame, there were 14 children brought to the ER for marijuana ingestion.  Now, that is only 14 out of 588 kids seen for various types of poisoning–a very small number–but still, it is a children’s health risk that has gone up with legalization.

Several of the children seen at the ER due to marijuana ingestion were there because they ate products that contained marijuana, which would be difficult to differentiate for a young child.  If they see a bag of candy, cookies, or brownies, children are not going to check the packaging…or necessarily understand it if they did.  Therefore, it is the parents’ responsibility–or whatever relative or adult may be keeping medical marijuana on hand–to store the stuff where inquisitive kids cannot possibly find it. And keep those brownies well out of reach!