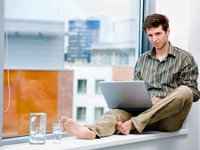 Those of us who have worked in an office setting are aware that along with fancy titles and higher salaries usually comes a corner office with a nice view.  While that may seem the least impressive of the perks that are attained by becoming a manager, it may turn out to be the one that benefits health the most.  According to new research, office workers who sit by a window sleep better and have a higher quality of life than their counterparts who sit in windowless areas.

The study, which took place at Northwestern University in Chicago, Illinois, found that people who work near a window in an office sleep for a longer period at night, sleep more soundly, are more energetic and active, and have an overall better quality of life when compared to folks not in contact with a window during the day.1 Preidt, Robert. “Windows Add to Office Workers’ Well-Being, Study Finds.” MSN. 6 June 2013. Accessed 12 June 2013. http://healthyliving.msn.com/health-wellness/sleep/windows-add-to-office-workers-well-being-study-finds   The participants were 49 men and women who worked in offices during a typical daytime schedule.  Of this group, 22 enjoyed a window view, while the other 27 sat in locations with no windows.

The subjects in the office with a window were exposed to 173 percent more “white” light during their workday than those without a window.  White light is natural light from the sun during daylight hours.  Workers with windows were found to log an average of 46 more minutes sleep per night than their windowless peers.  While that may not seem like a tremendous amount, keep in mind that most of us are chronically short in the sleep department.  The average amount of sleep for an adult in the United States these days is approximately six hours and 55 minutes, but most of our bodies require seven-and-a-half to eight hours of sleep to feel well rested.2 Cowher Williams, Jennifer. “Annual Sleep in America Poll Exploring Connections with Communications Technology Use and Sleep.” National Sleep Foundation. 7 March 2011. Accessed 14 June 2013. http://www.sleepfoundation.org/article/press-release/annual-sleep-america-poll-exploring-connections-communications-technology-use-   That extra 46 minutes per night can make up much of the difference between what we are getting and what we truly need in the sleep department.  And that can mean being more focused, having quicker reflexes, and greater problem solving abilities as well as promoting lower stress and anxiety levels and a stronger immune system.3 “The Benefits of Slumber.” National Institutes of Health News in Health. April 2013. Accessed 14 June 2013. http://newsinhealth.nih.gov/issue/Apr2013/Feature1 Another way to look at it is that 46 minutes of extra sleep a night works out to five hours more sleep a week. That’s almost one extra night of sleep a week. That’s huge.

And it’s not just a question of getting more sleep. In the study, the participants who were seated near windows reported having more restful sleep at night and fewer episodes of sleep disturbances than the participants without windows.  As a result, the workers with windows experienced less drowsiness during the daytime than their counterparts with no windows.  Not surprisingly, they also tended to participate in more physically active lifestyles and scored significantly higher on quality of life testing.

Even though this research was not structured to prove the cause and effect relationship between how having a window and exposure to natural light during the day would influence the body, it makes a lot of sense that seeing sunlight throughout the day helps keep our biorhythms balanced.  Natural light has a very different effect on the body than artificial light. A 2012 study at the Swiss Federal Institute of Technology in Lausanne, Switzerland, found that the type of light we are exposed to significantly influences the body’s melatonin production and, in turn, both alertness and productivity.4 Munch, Mirjam; et al. “Effects of prior light exposure on early evening performance, subjective sleepiness, and hormonal secretion.” American Psychological Association. February 2012. Accessed 14 June 2013. http://psycnet.apa.org/journals/bne/126/1/196   After two days of six-hour stretches in either daylight or artificial light, study subjects performed much better on tests of cognitive functioning when they had been exposed to the natural light.

Ultimately, if you work in an office on a 9-to-5 type of schedule, you might want to lobby your boss for a better seat if you are not presently near a window, there are plenty of mental health articles out there to back you up.  If that is not a possibility and you are stuck in an interior office or cubicle, try to get exposure to natural light as frequently as you can.  That might mean taking a window seat on the commuter train or bus, getting outside for a walk during lunchtime, or leaving work while it’s light out a few times a week to maximize your time in the sunshine. And if all else fails, you can set up your cubicle with a daylight lamp, usually sold under the heading “SAD, or Seasonal Affective Disorder,” lamp.5 Mayo Clinic Staff. “Seasonal affective disorder (SAD).” Mayo Clinic  9 March 2013. (Accessed 14 June 2013.)  http://www.mayoclinic.com/health/seasonal-affective-disorder-treatment/DN00013   After all, a well rested worker is a more productive worker, so it should be a win-win situation for both you and your boss.