Here’s yet another reason to minimize soy products in your diet. A recent study at the Harvard School of Public Health found that eating even moderate amounts of soy significantly reduces male sperm count. All it takes is a single cup of soymilk or a bit of tofu or an energy bar or a strip of soy bacon every other day, and sperm count drops by almost half, according to the researchers.

The research team monitored the soy intake of 99 men who were seen at a fertility clinic. They found that the higher the soy consumption, the lower the sperm count. Men who didn’t consume soy had an average sperm count between 80 million to 120 million sperm per milliliter, while the soy junkies averaged 41 million fewer sperm per milliliter. The problem stems from the fact that soy is high in isoflavone content — or phytoestrogens, which mimic the effect of estrogen in the body. This might work well for menopausal women who want to minimize hot flashes by eating tofu, but not so well for men who want to be virile and make babies — if true.

In spite of these findings, data shows that Asian men who eat up to ten times as much soy as study participants remain perfectly fertile. This fact sparked the European Natural Soyfoods Manufacturers Association to point out that, “Generations of Asians have regularly consumed soya without fertility disorders, and Asian countries have prodigiously produced very healthy, highly-functioning children for centuries.”

So what’s the story? Is soy consumption antithetical to fertility, given the fact that Asian men are chomping down the soy and churning out the kids?

Well, there is a difference between Western men and Asian men, and it has to do with weight. Asian men don’t have the incidence of obesity that we have in the West. The researchers found that the relationship between low sperm count and soy consumption was far more pronounced in overweight subjects. This may be because overweight men already produce more estrogen than men at healthy weights, making them more vulnerable to the impact of soy products. In fact, although Asian men who eat lots of soy do have slightly depressed sperm counts, they also have fewer immature sperm in their testes than Western men do.

The research team certainly took the view that excessive weight is the triggering factor. They wrote, “One possibility is that excess body weight modifies the relation between phytoestrogen intake and semen quality as our data suggests. While increasing at alarming rates, the prevalence of overweight and obesity is still much lower in Asia than in the USA.”

Pretty convincing evidence, or is it? One question that wasn’t addressed in the study was the possible impact of GMO products, since 85-percent of soy products on the shelf in the US are genetically modified, whereas in contrast, China imports GMO soy but doesn’t grow it, nor do any other Asian countries. And so, the soy products consumed in Asia are far less likely to be genetically modified. While the safety of GMO products continues to spark debate, it’s known that 90 percent of soy planted in the United States is herbicide-tolerant, most of it containing significant amounts of the herbicide Roundup. And, Roundup is a known endocrine disruptor.

As a side note, other problems with soy, beyond its sperm-killing properties, include “high levels of phytic acid or phytates [in unfermented soy products], which block the absorption of essential minerals like calcium, magnesium, iron, and especially zinc in the intestinal tract. Unfermented soy also contains trypsin inhibitors and hemaglutinin that stunt human growth.” Plus, soy has been implicated in damaged brain function, developmental abnormalities in infants, increased risk of cancer, and the early onset of puberty.

In short, if you must have soy, use organic, non-GMO products, limit consumption, and opt for fermented products such as miso, tempeh, and Tamari soy sauce. Oh, and lose some of that extra weight so that the phytoestrogens don’t wipe out your “little guys.” 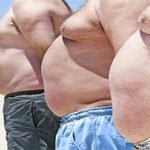