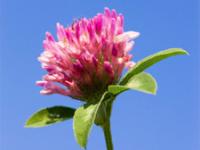 Red clover has a long history of not just medicinal use for cough and cancer, but, on a whole different note, also as common cattle fodder. And it has some religious background as well, as the three leaves on the clover were associated with the Christian Trinity. During the Middle Ages, the red clover was considered a charm of protection against witches. Just as a regular four-leaf clover is considered lucky, the same is true of the red four-leaf clover. In fact, there is some debate as to whether the red leaf clover is the actual true shamrock planted by St. Patrick in Ireland.

Regardless of the myths and folktales surrounding red clover, one thing has been proven through time – the herb makes a powerful addition to your natural medicine arsenal. If you’ve wondered what benefit this herb has, you’re not alone. One of the questions we often hear is, “What is red clover used for?” Let’s take a look…

Red Clover leaf is a staple of herbal blood cleansing formulas and has a long history of use as a medicinal herb. One of its common uses is to help with overall cardiovascular health. Red clover is an excellent blood purifier that over time gradually cleanses the bloodstream and corrects deficiencies in the circulatory system. It has been shown to thin the blood and reduce the possibility of blood clots and arterial plaques. This is one reason you’ll find red clover as an ingredient in Jon Barron’s Blood Support formula. While this is a very important benefit, it’s not the primary reason that Jon Barron and so many other herbalists use this herb.

TWEET #DIDYOUKNOW Red clover is one of the world’s oldest & most common natural treatments for all types of cancer. @BaselineHealth

Among classic herbalists, red clover is known as one of the world’s oldest and most common natural herbal supports for the treatment for all varieties of cancer — anywhere in the body. It is found as a central ingredient in many anticancer support formulas, including the Hoxsey formula, Jason Winters tea, and Essiac tea, not to mention Jon’s Blood Support formula. Its use is so common that one study found that 33 cultures use the herb to support and fight against the disease.

Not surprisingly, most doctors, the FDA and many “new-school” herbalists, being uninformed, have dismissed red clover as useless in dealing with cancer. However, researchers at the National Cancer Institute have indeed found anti-tumor properties in red clover. These incredible red clover benefits come from genistein, a biochemical in the plant, that has the ability to prevent tumors from developing the blood supplies they need to survive – thus starving them and killing them.

As it turns out, genistein is the same biochemical considered to be the main beneficial biochemical in soy. But red clover has a significant advantage over soy. It contains not just genistein, but significant levels (about ten times that found in soy) of all four beneficial estrogenic isoflavones (a special class of antioxidants) including daidzein. In addition to isoflavones, red clover contains another class of anticancer phytoestrogen compounds called coumestans – primarily in the form of biochanin.

In addition to being considered an effective natural cancer treatment support herb, red clover has shown some promise in areas of estrogen related health. The isoflavones found in red clover have been shown to produce estrogen-like effects in the body. As such, red clover is commonly used to help reduce symptoms of menopause, such as hot flashes, night sweats, and PMS, while at the same time promoting breast enhancement and breast health. It is also thought to help decrease the risk of women developing osteoporosis later in life. And the isoflavones found in red clover have been associated with an increase in “good” HDL cholesterol in pre- and postmenopausal women.

In addition to isoflavones and genistein, red clover also contains calcium, chromium, magnesium, niacin, phosphorus, potassium, thiamine, and vitamin C. Historically, it has often been used (and is still used) to treat whooping cough and other throat related conditions such as bronchitis and sore throats. Herbalists also use it in tinctures to help treat skin conditions such as eczema and psoriasis.

Where to Find Red Clover

This herb can be found in many forms including as dried leaves or capsules, in tincture or extract form, and as a topical treatment.

Note: Soy use, unlike red clover use, does not result in any increase in biochanin in the blood. Is that important? Studies have shown that biochanin may significantly inhibit breast cancer proliferation.