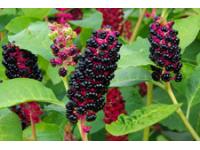 If you live anywhere from Maine to Texas, you may have been introduced to the poke root as a highly poisonous berry that should never be touched. In fact, before using the leaves, herbalists boil them three times, discarding the water in-between to create a dish that is referred to as “poke salad.”

If you live anywhere from Maine to Texas, you may have been introduced to the poke root as a highly poisonous berry that should never be touched. In fact, before using the leaves, herbalists have to boil them three times, discarding the water in-between to create a dish that is referred to as “poke salad” or “polk salad.” This dish gained some popularity when Elvis Presley covered the song “Polk Salad Annie,” a song about the dish and the poor, rural, Southern girl who prepared it.

TWEET Poke root has been used as a heart stimulant, for rheumatism, arthritis, dysentery & cancer. @BaselineHealth

This plant actually goes by many names, most commonly pokeweed or nightshade (not to be confused with belladonna, which is commonly called deadly nightshade and has similar looking berries). As a perennial, it can grow up to ten feet tall during the summer and then die back to its root each winter. Juice from the berries was once used to make ink and dye, and it is still used by the food industry to make red food coloring.

Besides being the subject of Southern rock songs, poke root has many other benefits and has been used by Native Americans for a myriad of conditions including as a heart stimulant, for rheumatism, arthritis, dysentery, and cancer.

The plant contains a protein called “pokeweed antiviral protein,” or PAP for short that may have anti-tumor effects. It is currently being studied for its anti-cancer properties, and some studies have shown that certain formulations of PAP may be useful against some types of cancer cells that depend on hormones to grow such as breast, ovarian, and prostate cancer. Also, according to one animal study, PAP demonstrated anti-cancer effects in rodents. Another study found that PAP, when combined with an immunotherapy drug called TP-3, holds promise as a potential treatment for advanced osteosarcomas and some soft tissue sarcomas. And some studies have found that poke may actually inhibit the expression of some cancer genes.

Maybe even more notable are the studies of the herb for use as a possible HIV treatment. The plant may have certain properties that both help strengthen the immune system by interacting with the proliferating T-cells and by inhibiting production of HIV viral proteins

Much like yellow dock root, poke root is also a powerful blood purifier and lymph cleanser, inciting and increasing the action of lymph glands throughout the entire body. In fact, you’ll find it as an ingredient in Jon Barron’s Blood Support formula.

The herb is especially known as an effective treatment for pain and swelling from rheumatoid arthritis. As a topical treatment, it has also been used to treat skin ulcers, sore and infected breasts, skin rashes, fungal infections like ringworm, acne, and scabies.

This herb has also been used to help with the following conditions:

How to Take Poke Root

Unless you know what you’re doing as an herbalist, it is probably not a good idea to experiment with raw poke root on your own. Instead, use only prepared formulations from trusted sources and from which the toxins have already been removed — leaving only the good stuff. And then, use only as directed.