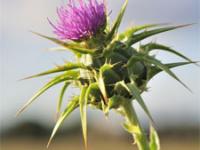 For over 2,000 years, Europeans used milk thistle for liver health and detox. In the West, its use dates back to the 1700s and is now used for several ailments.

For over 2,000 years, Europeans have used milk thistle for liver health by using it as a key component of a liver detox. In Western culture, its medicinal use dates back to the 1700s, and it is now used for a wide variety of ailments. The name “milk thistle” is derived from the shape and color of the plant’s leaves. Milk thistle herb is also called silymarin, which is actually the key bio-active in milk thistle and is an antioxidant flavonoid comprised of three isomers, the most active of which is called silibinin.

TWEET 100s of studies confirm milk thistle seed’s ability to protect the liver from nearly all types of damage! @BaselineHealth

Milk Thistle liver cleanse solutions are widely known. Literally hundreds of research studies, mostly in Europe, have confirmed the remarkable ability of milk thistle seed to protect the liver against virtually all types of damage including accidental exposure to chemical pollutants, toxic side effects of medications, liver disorders like hepatitis, and even self-inflicted damage from the overindulgence of rich food and alcohol. In fact, the United States National Library of Medicine has catalogued more than 300 scientific studies of milk thistle seed and its active compounds (especially silymarin) in their medicine database.

Double blind studies on the effect of milk thistle seed on toxic liver damage (mostly induced by alcohol) and ailments caused by certain drugs have been reviewed by medical experts. They concluded that the data from these studies suggests milk thistle is a therapeutically useful medicinal plant product that stabilizes the cell membrane and stimulates protein synthesis, while accelerating the process of regeneration in damaged liver tissue, and that these effects are important in the therapeutic efficacy of milk thistle.

In fact, the active ingredient in milk thistle, silymarin, has been used to treat a number of conditions including:

Over the past twenty or so years, intensive chemical, pharmacological, and clinical research has confirmed the mechanisms of action and the therapeutic value of milk thistle seed in a wide range of human liver disorders, including toxic metabolic liver damage (such as fatty degeneration of the liver) and supportive therapy in cases of chronic hepatitis and cirrhosis. With all of its natural liver health benefits, it’s no surprise you’ll find it as a key ingredient in Jon Barron’s Liver Tincture formula.

While mainly known for its help with liver related conditions, according to the Natural Medicines Comprehensive Database (NMCD), milk thistle is possibly effective for treating heartburn when used in combination with other herbs.

In addition, the NMCD also reports that silymarin is rated as possibly effective for lowering blood sugar in Type 2 diabetics. Other studies show that milk thistle holds promise in helping to reduce the severity of allergic nasal symptoms.

How to Take Milk Thistle

Animal experiments have shown that milk thistle seed extracts are safe, even in large doses, with practically no side effects, as well as no embryo-toxic effect. There are no contraindications nor known side effects of concern. Milk thistle seed can be safely used by a wide range of persons, including pregnant and lactating women, although it may have a mild, transient laxative effect for some people.

The popularity of milk thistle grew around the 16th century to such a degree that almost all parts of it were eaten. For instance, the leaves can be trimmed of prickles and boiled and used as a spinach substitute. For medicinal purposes, the seeds are used to make powders, extracts, tinctures and capsules. And it’s possible to make into a tea, but the components are not very water-soluble.