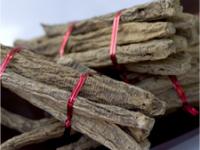 A favorite of King Tut (a large amount of licorice root was found in his tomb) and used by the Greeks as a cure-all much like the Chinese use ginseng, this herb has been around for thousands of years. It’s known for its sweet flavor – appropriate since it’s about fifty times sweeter than sugar – but licorice root has been used to treat everything from the common cold to cancer.

TWEET #didyouknow Licorice root is about 50x sweeter than sugar? It was also found in King Tuts tombs and frequently used medicinally by the ancient Greeks! @BaselineHealth

Licorice is one of a group of plants that have a marked effect upon the endocrine system. The glycosides present in licorice have a structure that is similar to the natural steroids of the body. For this reason, herbalists have used licorice for centuries to support the adrenal system during times of excessive stress by keeping it in balance. Specifically, licorice contains glycyrrhizic acid which stimulates adrenal secretions ensuring that normal function is maintained.

In addition, by enhancing cortisol activity, glycyrrhizin helps to increase energy, ease stress, and reduce the symptoms of ailments sensitive to cortisol levels, such as chronic fatigue syndrome and fibromyalgia. In fact, in the 1800s, licorice extract was a common remedy for a type of persistent fatigue known as neurasthenia–the condition we now know as chronic fatigue syndrome. In addition, since the glycyrrhizic acid found in licorice root encourages the function of the adrenal glands, it can help with feelings of nervousness and depression.

Women should certainly appreciate the phytoestrogens in licorice root. They have a mild estrogenic effect, making the herb potentially useful in easing certain symptoms of PMS, such as irritability, bloating, and breast tenderness. In addition, the phytoestrogens in licorice root may help to minimize menopausal symptoms by compensating somewhat for the natural decline in a woman’s estrogen levels following menopause. Another benefit is that it accomplishes all this while inhibiting the much stronger estrogenic effects presented by chemical estrogens in the environment—and even your body’s own powerful estrogens. In other words, it helps prevent estrogen dominance. This is why you’ll find licorice root as an ingredient in Jon Barron’s Women’s Formula.

If you have skin issues, licorice root may be helpful for you as well. Research shows that licorice root gel can decrease the signs of eczema. In a study, it was found that 2% licorice root gel was most effective. But it can be found in poultices and salves used for treating skin rashes, psoriasis, dry skin and other skin conditions as well.

Licorice root also has an aspirin-like action and has an anti-allergenic effect. This has made it useful in helping relieve headaches as well as hay fever and asthma related symptoms. It also acts as an expectorant, meaning it helps get rid of phlegm and can help control respiratory problems and treat sore throats.

That’s just scratching the surface of the many uses of licorice root. Licorice root also stimulates the production of digestive fluids and bile, soothes ulcers, helps reduce intestinal inflammation, and supports the healthy function of the kidneys, liver, and bladder. Its action in soothing ulcers is unique. Rather than inhibit the release of acid, licorice root stimulates the normal defense mechanisms that ward off ulcer formation. Specifically, licorice root improves both the quality and quantity of the protective mucous that lines the intestinal tract, increases the lifespan of the intestinal cell, and improves blood supply to the intestinal lining. In addition to helping lower stomach acid levels, which means it can help relieve heartburn and indigestion, licorice root acts as a mild laxative. And licorice Root stimulates the production of digestive fluids and bile For these reasons, you’ll find it used in Jon Barron’s Colon Regenerator formula and Liver Flush Tea.

If that’s not enough, licorice root has also been credited with helping relieve these following conditions:

How to Take Licorice Root

Licorice root is made from peeled and unpeeled dried root and is available in a variety of forms from powdered to liquid extracts. Typically, you’ll find the root in tea, tablet and capsule form. Note: a small number of people may find their conditions are aggravated by the glycyrrhizin found in licorice root. For those instances, an extract that does not contain glycyrrhizin, referred to as deglycyrrhizinated licorice (DGL), can be used instead. And one final note: licorice root should not be confused with licorice candies which contain very little actual licorice and are mainly flavored with aniseed. 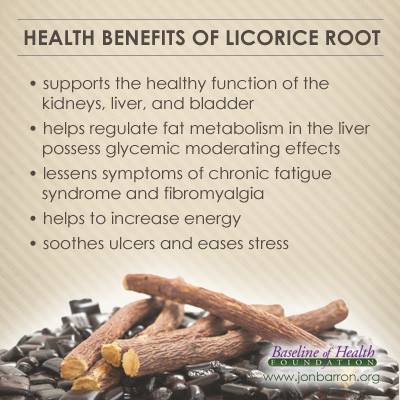