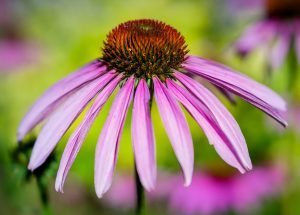 If ever there was a miracle herb, Echinacea would fit the bill. You may have heard about this herb’s cold-relief benefits, or the fact that Echinacea is one of the best-selling herbal products in the world. This herb’s history is closer to home than most herbs, as its use was first documented by Native Americans. Today it’s used as a natural immune booster, as well as for treating urinary tract infections, vaginal yeast infections, ear infections, athlete’s foot, sinusitis, hay fever, slow-healing wounds, and much more!

TWEET Studies show Echinacea reduces chance of catching cold by 58% and decreases length of a cold by an avg of 1.4 days @BaselineHealth

In the 19th century, “eclectic” medicinal practitioners documented using Echinacea for everything from snake bites to pain relief. Its use as a cold-relief remedy didn’t occur until later, when a Swiss herbal supplement maker was erroneously told that Native American tribes used Echinacea for cold prevention. In truth, the tribes used Echinacea to treat some of the symptoms that could have been caused by the common cold like sore throats and headaches.

Today, many studies have been done on this miracle herb. One study by the University of Connecticut combined findings from 14 previously reported trials examining Echinacea and concluded that Echinacea can reduce the chances of catching a cold by approximately 58%, and decrease the duration of a cold by an average of 1.4 days. In fact, in one of the largest studies on the use of Echinacea to protect against colds, it was discovered that the number of recurrent colds suffered by those with weak immune systems or a history of catching several bouts decreased each year by 60%. And yes, there are some studies that seemed to find Echinacea ineffective, but as Jon Barron has pointed out, they are seriously flawed.

Echinacea’s benefits certainly aren’t limited to cold and flu prevention, either. Research has also reported Echinacea to be effective in treating bronchitis, tuberculosis, infections, etc. In fact, it contains echinacoside (a natural antibiotic, comparable to penicillin in effect). However, although Echinacea has some antibiotic effect, allowing it to directly attack bacteria, it primarily works by making your own immune cells more efficient at attacking a broad range of viruses, bacteria, fungi, and protozoa, which makes it invaluable in wound healing and in the treatment of infectious diseases. Some studies even indicate that Echinacea might be beneficial in helping with cancer as well.

Echinacea as a Natural Immune Booster

Echinacea also contains echinacein, a biochemical that protects against germ attack by neutralizing the tissue dissolving enzyme hyaluronidase, produced by many germs. Studies, such as the one published in Infection and Immunology, show that Echinacea contains substances that boost the ability of your body’s macrophages to destroy germs. And other studies from the University of Munich have shown that Echinacea extracts boost T-cell production by as much as 30% more than immune boosting drugs.

And that’s not all; Echinacea has been used to treat…

How to Take Echinacea

So, what should you know about taking this miracle herb?

First, it’s important to remember that not all Echinacea is the same. As with all herbs, there is a wide range of quality, potency, and consistency among the numerous vendors, so you will need to be an informed consumer. Therefore, you should always check the grade of herb used. Instead of looking for bargain prices, look for companies that use high-quality herbs grown organically and with their natural ratio of biochemicals still intact.

Next, you’ll want to make sure you use Echinacea in a formula, not as a single herb. Herbal medicine treatments differ from traditional drugs. If you have a sore throat, you don’t just dose yourself with an herb like you would take a pill or cough medicine. Herbal medicine makes use of herbal formulations as opposed to single herbs. Herbal formulas not only address particular symptoms, they also support the body as a whole. In addition, they make use of the synergistic effect inherent in many herbs.

A few simple, easy to remember guidelines to follow are:

Finally, it’s important to understand that the immune system responds best to periodic stimulus, as opposed to constant stimulus. That is to say, you don’t want to use your Echinacea formula every day. It’s not that anything bad happens; it just becomes less effective as the body becomes used to the stimulation. Taking one week off a month is enough to maximize the immune-boosting effect.

For more information about Echinacea, the studies about it and other recommendations, click here.