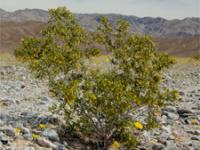 One of the most powerful antioxidants in nature

Chaparral leaf is one of the most powerful antioxidants in nature. The primary biochemical responsible for this is NDGA (nordihydroguaiaretic acid) – so effective, it is often used as a food preservative.

If you’ve ever been to the Southwest, you’ve probably seen chaparral at some point. Indigenous to the Southwest area of the USA and the desert areas of Mexico, chaparral may be one of the most potent herbal antioxidants. Native Americans have used leaves from the chaparral plant for centuries. In fact, some tribes claim it to be the very first plant ever created.

Exactly how this herb works is open to debate; however, most credit one of the main active components of chaparral, nordihydroguaiaretic acid, or NDGA, as a key factor. NDGA has antioxidant properties and is considered an anti-cancer agent. The plant also contains lignans that give it healing and anti-aging properties.

If you research natural cancer alternatives, you’re bound to come across chaparral. According to Sam Biser, author of Sam Biser’s Save Your Life Collection: A Layman’s Course in Curing Last-Stage Diseases, the herb seems to work against cancer cells by preventing them from “eating” the blood sugar they need to survive – basically it starves the cancer cells to death.

Chaparral as a Natural Blood Purifier

A medicinal tea form of the herb is also used in natural cancer treatments and to help cleanse the blood. The herb is a powerful blood purifier, which is why you’ll find it as an ingredient in Jon Barron’s Blood Support formula.

Chaparral as an Antioxidant

In addition to its potential anticancer properties, much is also written about chaparral’s antioxidant value. In John Heinerman’s book, Heinerman’s Encyclopedia of Fruits, Vegetables and Herbs, he says “…it seems like a good idea to take one chaparral capsule after consuming a Big Mac and French fries in order to offset some of the damage all of those free radicals you’ve ingested are capable of doing. And while chaparral may not hold quite the same promises expected of ginseng for longevity, it can certainly help to slow down the aging process quite a bit from the foods we eat on a daily basis.” You’ll also find it as an ingredient in Jon Barron’s Ultimate Antioxidant formula.

Chaparral has also been shown to have the following health benefits:

It has also been used to help treat a variety of conditions including:

What may surprise you most about chaparral is that you’ll often find this herb on everyone’s blacklist. According to the FDA, chaparral has been linked to serious liver damage. The FDA has recorded two deaths and 10 cases of hepatitis or other liver abnormalities in users.

The reality of the situation, though, is that the evidence for chaparral liver toxicity is anecdotal. It is not the result of any double blind studies or of any clinical trials. For example, one of the cases the FDA likes to single out can be found in the Journal of the American Medical Association (273 (6):489). The details of the case concern a 60-year-old woman who developed jaundice and liver failure while taking one to two capsules of chaparral each day with a pinch of garlic in a tea made from nettle and chickweed. The authors of the JAMA article concluded it was the chaparral that caused the liver problems. What is fascinating is that the patient in question was also consuming atenolol, aspirin, was on a nitro patch, and occasional acetaminophen, as well as diltiazem hydrochloride – all drugs with profound hepatoxic potential. Amazingly, none of these other substances was even considered as a possible cause of the liver problems by the authors…or the FDA. What a surprise!

Nevertheless (and despite the fact that extensive studies on chaparral in the 1970s and 1980s were unable to find any hepatotoxic properties), in December of 1992, FDA Commissioner David Kessler announced, “The public should not purchase or consume chaparral.”

After these allegations of liver toxicity by the FDA, manufacturers voluntarily restricted sales of chaparral for several years until the reports were investigated. Following a lengthy review, a panel of medical experts concluded “no clinical data was found… to indicate chaparral is inherently a hepatic toxin.” In late 1994, this report was submitted to the FDA. The American Herbal Products Association (AHPA) now recommends that companies that offer products for sale for internal use that contain chaparral (Larrea tridentata) [should] provide labeling that contains the following informational language:

Rare reports of serious liver disease have been associated with ingestion of chaparral. Seek advice from a healthcare practitioner before use and, in so doing, inform them if you have had, or may have had, liver disease, frequently use alcoholic beverages, or are using any medications. Discontinue use and see a doctor if vomiting, fever, fatigue, abdominal pain, loss of appetite, or jaundice (e.g., dark urine, pale stools, yellow discoloration of the eyes) should occur.

How to Take Chaparral

So, is this remarkable native California plant now sold freely in the marketplace and used to benefit ailing people all over the world? Hardly!

Search for “chaparral toxicity” on the web and you will see numerous articles still announcing the dangers of the herb (all citing the same cases from the early 90’s.) Or try and buy chaparral in Canada or much of Europe. The problem is that once an herb is labeled dangerous (even if disproved at a later date), the stigma remains – and is brought up over and over and over again… acquiring truth through repetition, if not fact.

Fortunately, despite the bad press, the chaparral plant, or larrea, is at least available (for the time being) in the United States.