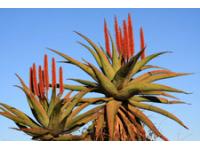 What is bitter aloe? Native to Africa, Aloe ferox (also known as cape aloe or, commercially, as bitter aloe) has been harvested as a medicinal plant for over 200 years. Bitter aloe is among the tallest of the more than 400 aloe species and can be found in the Cape Region of South Africa. Compared to the more widely known Aloe vera, Aloe ferox produces 20 times more bitter sap and has higher nutrient concentrations.

It is most notable, however, for its renowned natural colon cleansing benefits. As an effective natural laxative and colon cleanser, it is probably the strongest of the colon stimulating herbs. Aloe bitters drained from the cut leaves of the plant are used mainly for laxative purposes – and, it seems that’s for good reason. A 2004 study looking into the effects of Aloe ferox on irritable bowel syndrome found that 30% of the participants on the aloe showed either clinical remission or improvement. Only 1% of participants on the placebo exhibited the same results. Based on this study, it is thought that taking aloe for four weeks could reduce symptoms of IBS. It’s probably no surprise that you’ll find it as an ingredient in Jon Barron’s Colon Corrective formula.

Aloe Ferox as an Anti-Everything…

Like most medicinal herbs, Aloe ferox has a host of other health benefits as well. Numerous scientific studies on aloe gel are demonstrating its analgesic, anti-inflammatory, wound healing, immune modulating, and anti-tumor activities as well as antiviral, antibacterial, antifungal, and antiviral properties. Its juice has been shown to lower cholesterol and triglycerides while demonstrating anti-diabetic activity.

Aloe Ferox for the Immune System

Laboratory experiments have also shown that bitter aloe stimulates the growth not only of lymphocytes, which are an important part of the immunological defense mechanisms, but also of fibroblastic cells in skin and the cells that make up connective tissues and can help soothe and heal tissue in the intestinal tract as well.

In addition to these benefits, WebMD reports Aloe ferox has been used to help treat the following:

You may also find it in cosmetics, skin care products, and even in beverages.

Aloe ferox may also provide some allergy relief. In an animal study that was evaluating the effects of aloe, symptoms of inflammation and nasal mucus were significantly relieved. More research needs to be done; however, researchers see promise in this area.

In other animal studies, Aloe ferox has shown promise as a wound healer as well. A 2008 study published in the Journal of Ethnopharmacology comparing compounds from Aloe ferox with compounds from other aloe genera on wound healing indicated that it exhibited therapeutic properties, aided in the healing process, and inhibited some microbial growth. This may be because of its similarity to Aloe vera. The glycoproteins in the gel provide wound healing benefits, and because Aloe ferox gel is moist and sticky, it can help insulate and hydrate wounds, which helps heal them.

How to Take Aloe Ferox

You can find aloe ferox in both capsule and crystal form. Today, however, while it is not yet threatened with global extinction, the species has become extinct in several localities where harvesting and urban expansion pose a threat. To combat this threat, Aloe ferox is currently listed on Appendix II of the Convention on International Trade in Endangered Species (CITES), and a number of the plants can be found in protected areas within South Africa. Nevertheless, limited amounts of Aloe ferox powder from sustainably farmed plants can be (and are) legally exported (mostly to the European Union) and then re-exported and used in nutritional products worldwide. This is where Jon Barron gets the Aloe ferox that he uses in his formulas.