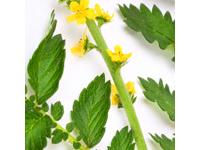 A Medieval Herb With Modern Uses

If you’ve ever used the herb agrimony, you have something in common with the injured men on medieval battlefields. During the Middle Ages, the herb was used to treat a variety of health-related problems from bad backs and internal hemorrhages to wounds received on the battlefield. While agrimony’s medieval history is probably more colorful, the use of the herb in fact predates the Middle Ages. The word agrimony actually comes from the Greek world Argemone, a Greek word given to plants which were used to heal the eyes.

During the Saxon era, it was used to heal wounds, snake bites, and other problems such as warts. As already referred to, agrimony became popular during the medieval times primarily because it staunches bleeding and encourages clot formation. This makes for an effective treatment for wound-related injuries. In France during the 15th century, it was used medicinally as an ingredient in the famous arquebusade water used to treat gunshot wounds. In fact, the eau de arquebusade is still applied for sprains and bruises in France today. At one time, the herb was also listed in the London Materia Medica as a vulnerary, a medicine used to primarily treat wounds.

TWEET #DIDYOUKNOW The medicinal use of the herb agrimony predates the Middle Ages! @BaselineHealth

Today, agrimony is used by modern herbalists as a mild astringent and a tonic. It is also currently listed as one of the 38 plants that are used to prepare Bach flower remedies. It is touted for a number of medicinal purposes including issues related to headaches, menstrual symptoms, skin conditions, coughs and sore throats, digestive complaints, wounds, and other minor injuries such as bruises. It’s probably no surprise that people considered agrimony one of the “cure all” herbs. The English poet Michael Drayton even once hailed it as an “all-heal.” Looking at the common uses for the herb on WebMD shows that this sentiment hasn’t changed over the years.

Of note, however, is the use of the herb to treat digestive issues. Agrimony has traditionally been used to help with gallbladder and liver disorders due to its bitter tonic action, which promotes the stimulation of digestive and liver secretions. It is also valued for helping with kidney stones due to its silica component. And it is considered beneficial in dealing with urinary incontinence, cystitis, and other disorders of the urinary tract. This makes the herb a key ingredient in Jon Barron’s KGP Flush formula (natural kidney, gallbladder, and pancreas optimization formula).

Washes made from teas or infusions are commonly used to treat wounds, sores, eczema, and varicose ulcers. For skin conditions such as acne, agrimony is a welcome ingredient. A weaker version of the infusion has also been used as an eyewash for an herbal treatment of conjunctivitis, bringing us back to its original use as described by the ancient Greeks.

Agrimony is also a key ingredient in some herbal cough and sore throat remedies. The tannins in the herb tone the mucus membranes, making it useful for alleviating the symptoms of coughs and sore throats.

How to Use Agrimony

With all of these uses and its long history, it should be no surprise that agrimony is considered a key herb for many herbalists. If you aren’t growing it, you’re likely to find this herb dried in local herb shops. The herb is most commonly used dried, in tinctures, teas, washes, or in poultices.

For other natural herbs with similar functions, click here.