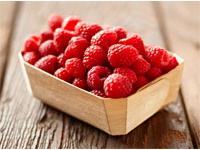 When indulging in a summer snack of red raspberries, it may be comforting to know that our Paleolithic ancestors were eating the same food. As one of the oldest fruits, it may not be surprising to learn that there are 200 different varieties of raspberries. More than just a tasty summer fruit, nearly every part of the raspberry plant has a medicinal use.

Raspberries are associated with fertility in Greek mythology. Greeks and Chinese used red raspberry to treat diarrhea and dysentery, and to aid in healing wounds. The people of Tibet use red raspberry leaves to cure emotional problems, infections, and exhaustion. Many Native American tribes have also used raspberry. The Cherokee tribe used red raspberry root to treat toothaches and coughs. The Chippewa used it to treat measles, and washed their eyes with a tea made from raspberry root bark to heal cataracts. The Iroquois tribe used various parts of the plant to treat kidneys and blood pressure, among other things.

And if that’s not enough to ask from one little berry, research has shown that one of the major benefits of red raspberries is their ability to fight cancer. This is because of the ellagitannins present in the fruit. Research done by Dr. Daniel Nixon at the Hollings Cancer Institute has shown a number of surprising results. Here are just a few of them:

Which brings us to the question of how to obtain the benefits of eating red raspberries. Dr. Nixon used one cup of red raspberry puree per day in his studies on raspberries and cancer. However, that is not practical for most people. Fortunately, it turns out the raspberry seeds have a much higher concentration of ellagitannins than the puree. By raspberry variety, they are: