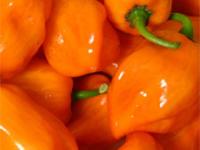 If you’re a self-dubbed pyro-gourmaniac (people that love spicy food), then you probably already have a good appreciation for the habanero pepper. Rated one of the hottest peppers on the Scoville chart, this spicy, citrusy fruit continues to grow in popularity. And, not surprisingly, this little pepper is more than just a way to heat up a dish. Habaneros also have a number of great health benefits as well.

Habaneros are high in Vitamin C. In fact, according to the book, “75 Exciting Vegetables for Your Garden” a habanero pepper can have as much as six times the vitamin C found in an orange! For the most Vitamin C content, look for the green unripened peppers. According to WebMD, adding habaneros to your diet may provide many of the benefits attributed to vitamin C including, “protection against immune system deficiencies, cardiovascular disease, prenatal health problems, eye disease, and even skin wrinkling.”

TWEET #didyouknow A habanero pepper can have as much as 6x the vitamin C found in an orange! @BaselineHealth

The habanero pepper is also credited with helping relieve some cold symptoms, particularly respiratory issues. The pepper is reported to help clear out the sinuses and congested mucus membranes in the nose and lungs. It also creates a sweat effect which can help aid your body in eliminating toxins. It has demonstrated antibacterial activity against microbes such as Streptococcus mutans, not to mention inhibitory activity against both yeast and Candida infections. And it is considered an antioxidant which can help repair damage from free radicals. These are a few of the reasons you’ll find this pepper as an ingredient in Jon Barron’s Super ViraGon formula.

While these health benefits are significant, the main health benefit from these peppers can be attributed to the compound that gives them their spicy kick, capsaicin. When it comes to peppers, a study published in the “Journal of Environmental Science and Health” found that  habanero peppers  have the highest concentrations of capsaicin when compared to other peppers from their genus. So why does this matter?

Habanero as a Natural Cancer Treatment?

Besides indicating the “spiciness” of a pepper, capsaicin also has as number of health benefits. Capsaicin is constantly being studied for its effectiveness in cancer treatments. According to the Memorial Sloan Kettering Cancer Center, “capsaicin has demonstrated chemopreventive and antiproliferative effects against various cell lines including breast, bladder, and prostate cancer cells.”

Capsaicin is also credited with helping weight loss. Capsaicin increases thermogenesis, a process where your body raises its temperature. This process can increase your metabolism, which forces fat cells to be used as energy. In addition, this compound is credited with helping you feel full longer and decreasing your appetite for sugary and fatty foods. It is also a low-calorie, low-sodium food.

Capsaicin may also help treat diabetes and promote heart health. Studies have shown that it may help lower cholesterol and blood pressure levels as well. A study published in the “American Journal of Clinical Nutrition” found that capsaicin appears to regulate insulin levels following a meal, especially for study subjects who were overweight.

If all these benefits weren’t enough, capsaicin is a well-known ingredient in many topical pain relief and arthritis treatments – and for good reason. Studies have shown that capsaicin can:

Capsaicin is considered to have anti-inflammatory properties since it inhibits the production of Substance P, a compound that is responsible for the swelling and pain associated with inflammation. Because of this, it is used to help treat psoriasis and headaches.

How to Use Habaneros

Luckily, habaneros are a rather easily obtainable fruit and are fairly simple to add to your diet. If the spice is too much for you, you can tame the heat levels somewhat by removing the seeds and veins and cooking the fruit. However, it only takes a small amount to receive the nutritional benefit of this pepper and can easily be incorporated into your menu in salads, soups, salsas, and other dishes.