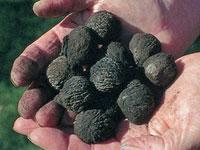 Besides being one of the most effective herbal laxative remedies and also being rich in Vitamin C, black walnut hulls have a long history in herbal medicine. Pliny the Elder, the Roman naturalist, talked about their healing power in the first century A.D. Seventeenth-century herbalist Nicholas Culpeper prescribed walnut to draw poisonous venom from snake and spider bites. It was the Native Americans, however, who first used black walnut hulls as a laxative and as a treatment for eliminating parasites in the intestine. This use, as a laxative, is how it is most commonly implemented today. But its use as both an anti-pathogenic and anti-parasitic, may be its most important roles.

One study from 2012 screened plant quinones for inhibiting effects on the bacterial fire blight pathogen. The most active compound discovered in walnut hulls was juglone. As the study said, “juglone has a potent and specific bactericidal effect on E. amylovora…Juglone is a promising candidate for the development of a new environmentally friendly plant protectant to replace the antibiotic streptomycin currently used in fire blight control.”

Another study published in Phytotherapy Research found that juglone showed significant inhibition of RNase H activity in the HIV virus. This is a big deal. HIV-1 replicates itself through reverse transcription, a process that produces new double-stranded DNA from the viral genome’s single-stranded RNA. During DNA synthesis, a DNA/RNA hybrid is formed as a replication intermediate and must be cleaved by RNase H before the process can continue. Inhibiting this inhibits replication of the HIV virus, and the study showed that juglone from black walnuts did just that.

Juglone also exerts its effect by inhibiting certain enzymes needed for metabolic function. It is highly toxic to many insect herbivores (it is often used by organic gardeners for pest control), and studies have shown that it can expel parasitic worms from the body. Black walnut hull is reported to be effective against pinworm, ringworm, tapeworm, and other intestinal parasites. While there are very few scientific studies on black walnut hulls, the ones that exist are very interesting and suggestive.

In addition to the previously cited study above in support of black walnut hull’s benefits with helping to expel intestinal parasites, the following studies are strongly suggestive. For example, a 2008 study identified types of wood that were resistant to the Emerald ash borer (Agrilus planipennis Fairmaire) (Coleoptera: Buprestidae), an invasive pest that eats the inner bark of trees. The study found that ash borers that normally fed and developed on ash logs had no larvae and were not able to survive, grow, or develop on any black walnut trees or logs.

In truth, this is one case where experience trumps lack of studies. Any good herbalist who has used black walnut hull tincture, either internally or externally, can tell you how effective it is. Dr. John Christopher tells a great story about how when serving in the army, he used it to cure jungle rot in just four days.

It is also important to understand that many parasites do not confine themselves to our intestinal tracts. There are at least 1000 species of parasitic organisms that can live in humans, including Giardia, flatworms, hookworms, ringworms, nematodes, and a whole host of funguses. Incidentally, medical labs only check for about 50-60 of them. Some encamp in the liver, and others, such as Cryptococcus gatti, invade the lungs, nervous system, soft tissue, lymph nodes, and joints. Anti-parasitic and anti-fungal herbs such as black walnut (not to mention heavy doses of garlic) can help drive all of them out of the body. This is while you’ll find black walnut hull as an ingredient in Jon Barron’s Liver Tincture formula.

Black Walnut Hull as a Vitamin and Mineral Source

Before vitamins and minerals were commonly used, herbalists were known to use black walnut hull for a variety of conditions including easing scrofula, ulcers, wounds, rickets, scurvy and as a gargle. In more recent times, Russian military hospitals also used it as a cleansing and quick healing medication for wounds and ulcers.

How to Take Black Walnut Hulls

Black walnut hulls can be found as a liquid extract and in capsule form. You can also order black walnuts or find them in some natural food stores. Side effects associated with black walnut supplements are uncommon, and it is generally safe to use unless you are pregnant or allergic to nuts. Use while pregnant could theoretically cause birth defects or negatively impact the growth of the fetus, or potentially cause a miscarriage. The odds of any of these things happening is extremely low, but it is recommended that you not use it while pregnant.