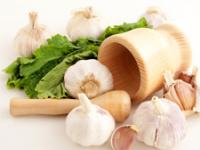 Garlic is used as an herbal medicine. In fact, it is one of the best infection fighters available for both bacterial and viral infections.

If you spend any time in the kitchen, you are likely familiar with garlic – if not with the taste, then at least with its pungent smell. Love it or hate it, there’s no denying that garlic is not only a flavorful addition to meals, but also a powerful natural remedy as well. In fact, garlic is one of the best infection fighters available for both bacterial and viral infections. It is a natural antibiotic that does not appear to create resistant bacteria strains. In addition, fresh garlic extract has been shown to be capable of neutralizing or destroying many viruses.

For instance, if you find yourself getting colds frequently, garlic may be of help. One study found that those who supplemented daily with garlic reduced the number of colds they had by 63%, and the average length of cold symptoms was reduced by 70% from those in the placebo group. Another study found that high doses of garlic extract may reduce the length of days you’re sick with a cold or the flu by 61%.  This is one of the reasons you’ll find garlic as an ingredient in Jon Barron’s Super ViraGon formula.

Garlic as an Immune Booster

In addition, garlic possesses the ability to stimulate a healthy immune system. It can stimulate the activity of the macrophages (white blood cells), which engulf foreign organisms, such as viruses, bacteria, and yeast. Furthermore, garlic increases the activity of the T-helper cells (immune cells which are central to the activity of the entire immune system). In addition, when garlic is crushed or chopped, it forms a number of biochemicals that together with the odor-providing chemical ajoene, work to destroy many types of parasites. This is especially important during any detox and is why you will see garlic in Jon Barron’s Liver Tincture for detoxing and repairing the liver.

Garlic as a Natural Antibacterial

This little bulb doesn’t stop there, either. Garlic may be particularly effective in treating upper respiratory viral infections due to its immune-enhancing properties and its ability to clear mucus from the lungs. It destroys and/or inhibits various bacteria and fungi, with an antibacterial action equivalent to 1% penicillin. Garlic benefits for men and women also include its being an effective ally against strep, staph, and even anthrax bacteria. As the Garlic Information Center of Great Britain says:

“Garlic is the only antibiotic that can actually kill infecting [anthrax] bacteria and at the same time protect the body from the poisons that are causing the infection. It is known that the most sensitive bacterium to garlic is the deadly Bacillus anthracis, which produces the poison anthrax. Even the forefather of antibiotic medicine Louis Pasteur acknowledged garlic to be as effective as penicillin, and late studies showed similar activity to a more modern antibiotic, chloramphenicol. Even the blood of garlic eaters can kill bacteria; and it is also reported that the vapor from freshly cut garlic can kill bacteria at a distance of 8 inches!!”

More than just an infection fighter, garlic has a number of other health benefits. Some studies have shown that supplementation with garlic may have a significant impact on reducing blood pressure in people with high blood pressure issues. In fact, one study showed that aged garlic extract at doses of 600-1,500 mg was just as effective as the drug Atenolol at reducing blood pressure over a 24 week period. It also appears to help reduce total and/or LDL cholesterol by about 10-15%.

That’s just scraping the surface to all this bulb can do. It is credited with being one of the earliest “performance enhancing” substances. Ancient cultures used garlic to help reduce fatigue and enhance the work capacity of laborers, including the builders of the great pyramids. (Inscriptions found in laborers’ tombs at the great pyramids show that they loved their garlic.) It was even given to Olympic athletes in ancient Greece.

Garlic has been shown to help with detoxifying heavy metals in the body. It has anti-inflammatory, antibacterial, and antiviral properties. In addition, it has also been credited with helping to:

Who knew such a tiny pungent tasting and smelling bulb could be capable of doing so much?

How to Use Garlic

So how do you capitalize on nature’s natural medicine? Letting garlic sit for about ten minutes or so after you’ve chopped or crushed it allows the enzymes in garlic to start working on your behalf. If you use the garlic immediately, you run the risk of not getting its full benefits. For example, in the absence of chopping or crushing, research has shown that just 60 seconds of immediate microwaving will cause garlic to lose some of its cancer-protective properties. Immediate boiling of whole, intact garlic will also lower these properties, as will immediate addition of a very low-acid ingredient like lemon juice.

So when you’re thinking about dinner options tonight, don’t forget to include the garlic! 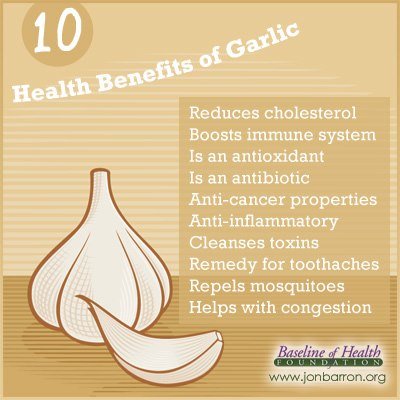