A Rocky Marriage is Bad for the Heart 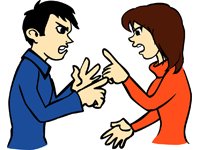 “At the same time, I wanna hug you; I wanna wrap my hands around your neck.”  Lyrics to “True Love” by Pink

Just about every married couple–once they’re past the honeymoon stage, at least–has moments of anger, frustration, and dislike for each other.  It is hard to live with another person without occasionally driving each other crazy.  Those feelings are natural and don’t indicate a problem in the marriage unless they are happening frequently.  If you reach the point where there are as many negative feelings as positive, it likely indicates serious relationship issues to work through.  But that’s not what this blog is about. Today, we’re talking about heart health. New research has found that having ambivalent opinions of your spouse may truly be bad for your heart–both romantically and literally.

The study, which took place at the University of Utah in Salt Lake City, determined that men and women who have mixed feelings toward their mates may face a greater risk of developing heart disease.1 “Not into your spouse? It may hurt your heart health.” CBS News. 21 February 2014. Accessed 23 February 2014. http://www.cbsnews.com/news/not-into-your-spouse-it-may-hurt-your-heart-health   The subjects were 136 couples in long-term marriages.  The participants were an average age of 63 and had an average marriage duration of 36 years.  Each person completed a survey individually that contained a variety of questions about their relationship and how they feel about their spouse.  They rated their significant other as to whether they were helpful or uncooperative when all manner of support, requests, or advice was needed.

The scientists then categorized these assessments provided by the volunteers as having either “positive” or “negative” outcomes.  They determined that only 30 percent of the subjects were seen by their partner in a generally positive light. Thankfully, none were considered totally negative, but the remaining 70 percent of the subjects were deemed ambivalent because their partner held a fairly equal combination of positive and negative feelings toward them.

In the meantime, imaging tests were performed on each of the participants to check whether calcium deposits had formed within their coronary arteries, potentially narrowing the arteries and increasing heart attack risk.  Blood samples were taken to obtain cholesterol and blood sugar levels.  In addition, exercise habits, smoking status, and other lifestyle choices were noted.  All of this evidence was compiled to determine a heart disease risk for every individual volunteer.

The results showed that those married couples with mutually ambivalent feelings toward each other had a substantially greater buildup of calcium within their arteries compared to their peers with more positive feelings.  The spouses who had positive outlooks toward one another or those couples with one positive and one ambivalent partner showed no evidence of higher heart disease risk.  Even when the researchers controlled for all of the other health and lifestyle variables, the findings remained constant with only the dually ambivalent spouses more likely to develop cardiovascular illness.

Ultimately, according to the researchers, it appears to come down to the type of support the partners can provide to one another.  Theoretically, at least, your spouse should be the person with whom you share the most and connect the best, as well as both giving and providing a major source of support in each other’s feelings and endeavors.  And this is typically the case when the relationship is good and you think of your mate in an overall positive light.  However, when you feel more ambivalent toward your spouse, you don’t necessarily want to give of yourself to them or offer your significant other what they may be requiring emotionally.

It’s not much of a stretch from that point to suggest that those individuals who are unhappy in their marriage and do not have the support that we all need–particularly for those who may not have any other family or friends to provide it–will experience greater stress levels.  And stress is certainly a contributing factor in the development of heart disease.  Studies, such as a 2003 experiment at the National Heart Foundation in West Melbourne, Australia, have found that there is a strong link between stress, a lack of social support, and an elevated risk of coronary heart disease and heart attacks.2 Bunker, Stephen J.; et al. “‘Stress’ and coronary heart disease: psychosocial risk factors.” Medical Journal of Australia. 2003. Accessed 25 February 2014. http://www.mja.com.au/journal/2003/178/6/stress-and-coronary-heart-disease-psychosocial-risk-factors   This is at least partially due to higher levels of cortisol produced when we are experiencing prolonged stress. This hormone results in increased inflammation and higher blood pressure.

So make a full-fledged attempt at rekindling more positive feelings toward your mate if you have not been so happy lately.  Cultivate other relationships with a sibling or close friend as well, to ensure that you have a strong support network. And do what you can to alleviate stress regularly through meditation, exercise, natural stress relief supplementation, or whatever works for you.