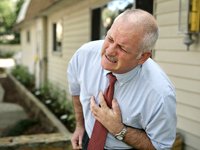 Some romance experts advise that love will come precisely when you aren’t looking for it. The same principle seemed to be at work this past week, when Australian researchers made a discovery they weren’t looking for. The researchers were seeking to track the path inflammatory immune cells take following a heart attack, but instead, they accidentally stumbled upon a method that significantly reduces heart attack damage.

The discovery was made when the research team injected mice with microparticles intended to track the inflammatory cells.1 Nogrady, Bianca. “Microparticles could reduce heart attack damage.” 16 January 2014. ABC Science. 16 January 2014. http://www.abc.net.au/science/articles/2014/01/16/3926376.htm These cells flood the heart muscle following a cardiac event in order to clean up dead cells, but in fact, they cause most of the inflammation and damage connected with heart attacks. The serendipity occurred when the microparticles unexpectedly attached themselves to the inflammatory cells and redirected them away from the heart muscle. Instead, they delivered the cells to the spleen where they died. The end result was 50 percent less scarring damage to the heart, leaving the heart able to pump about 30 percent more blood. Treatment with the microparticles could mean the difference between life and death for a patient.

The microparticles are actually small balls consisting of polylactic-co-glycolic acid, a biodegradable substance already approved for use in absorbable stitches.2 “New discovery has potential to transform heart attack treatments.” 16 January 2014. News Medical. 16 January 2014. http://www.news-medical.net/news/20140116/New-discovery-has-potential-to-transform-heart-attack-treatments.aspx In spite of the enormous potential of this method, one limitation is that the microparticles only repair damage that occurs after a heart attack. Any tissue damage sustained during the heart attack will not be repaired. Also, the coronary disease that triggered the heart attack in the first place won’t heal, which means the patient still can have another heart attack. But a lot of the damage during cardiac arrest does accrue after the event, and so reducing just that damage by half should dramatically influence the patient’s quality and duration of life.

Another limitation is that the microparticles have to be injected into the bloodstream within 24 hours of the heart attack in order to be effective. Given that about half of all heart attack victims die before they make it to the emergency room, the intervention obviously won’t work for every patient. The patient would need to receive appropriate emergency care in time.

The problem in making that happen is threefold. First, some heart attacks are so profound that the victim can’t survive even if rushed immediately to the hospital. Second, many people wait too long before deciding that they need to get help. And finally, a study hot off the presses about the dismal state of emergency medicine in the US makes it clear that the necessary help might not be available in time even if the patient gets there promptly.3 Rice, Sabriya. “Nation’s strained emergency care getting worse, ER docs warn.” 16 January 2014. Modern Healthcare. 16 January 2014. http://www.modernhealthcare.com/article/20140116/NEWS/301169944/nations-strained-emergency-care-getting-worse-er-docs-warn According to state-by-state report cards issued by the American College of Emergency Physicians, the average quality of emergency care nationwide is at only a “D+,” with only three states scoring above a C. In fact, 21 states received an F in the “access to emergency care” category–not good news for anyone who just had a heart attack, nor for anyone whose life might depend on an injection of microparticles.

In any event, the medical community is abuzz regarding the nanoparticle discovery. Dr. Daniel Getts of the Northwestern University Feinberg School of Medicine, who directed the research, said, “This is the first therapy that specifically targets a key driver of the damage that occurs after a heart attack. There is no other therapy on the horizon that can do this. It has the potential to transform the way heart attacks and cardiovascular disease are treated.”

Apparently, it also has the potential to transform the way other inflammatory diseases are handled. Researcher Stephen Miller, also at Northwestern University, says, “The potential for treating many different diseases is tremendous. In all these disease models, the microparticles stop the flood of inflammatory cells at the site of the tissue damage, so the damage is greatly limited and tissues can regenerate.”

Right now, the research team is conducting tests to evaluate the safety of nanoparticle injection. They project that clinical trials on humans are about two years down the road, meaning that treatment with nanoparticles could become standard practice soon, if all goes well. That’s good news for the millions who have heart disease given that right now, heart attacks kill about 2,200 Americans every day, making it the nation’s number one cause of death.

On the other hand, while it’s good to know there may be a way to reduce cardiac fatalities in the short run, remember that the method won’t heal the underlying disease, and so as always, it’s in your best interests to get and stay fit. For more insight, see Jon Barron’s article on maintaining heart health.