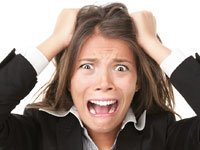 We’ve all got stress in our lives.  Whether it’s due to problems at work, paying off bills from the holidays, family issues, or any other of a myriad of possibilities, life isn’t easy for anyone.  But if you feel your stress and anxiety levels are higher than usual lately, it is important to find ways to promote calm and relaxation because new research has found that elevated stress may be linked to a greater risk of having a stroke.

The study, which took place at the University of Pittsburgh School of Medicine in Pennsylvania, determined that those individuals with the most anxiety/stress/pressure faced a much higher chance of a stroke occurring at some point in the future.1 Aleccia, JoNel. “High anxiety? It could give you a stroke, study finds.” Today. 19 December 2013. Accessed 2 January 2014. http://www.today.com/health/high-anxiety-it-could-give-you-stroke-study-finds-2D11775209   The subjects were more than 6,000 adults between the ages of 25 and 74 who had taken part in the National Health and Nutrition Examination Survey (NHANES I).  The researchers pored over the medical records, questionnaires, and interview accounts that had been collected for a period of 22 years.

Psychological surveys included questions that focused on a participant’s self-assessment of their perception of the amount of stress or pressure they were under, whether they felt more worried or upset than usual, and if they were experiencing anxiety or nervousness.  The volunteers rated their answers on a scale of zero to five, with zero representing very high anxiety and five representing no anxiety.  Over the course of the more than two decades that were analyzed, 419 of the subjects, or close to seven percent, had a stroke.

The people who rated their stress levels as highest were found to have a 33 percent increased chance of having a stroke as compared to their peers who reported experiencing the least stress or anxiety.  And it wasn’t just those who were in the top tier who faced a greater risk; each incremental step up was associated with a 17 percent rise in the risk of stroke over the level before it.

This study provides some valuable insight into how long-term or severe stress or anxiety can affect our health and is among the first research that focuses solely on an association between these factors and stroke as independent from depression and other issues that may influence cardiovascular risk factors as well.  As far back as 1994, there was a study at the Harvard School of Public Health in Boston, Massachusetts, that found anxiety increases the risk of coronary heart disease and heart-related mortality,2 Kawachi, I.; et al. “Symptoms of anxiety and risk of coronary heart disease. The Normative Aging Study.” Circulation. 1994. Accessed 3 January 2014. http://circ.ahajournals.org/content/90/5/2225.full.pdf but little focus in research has been placed on anxiety and stroke.

While the current research drew from a large population sample, strengthening its findings, it did not control for certain lifestyle habits that might have altered the outcome.  For instance, the participants who rated their anxiety and stress levels as high were also found to typically be more sedentary and were more often smokers than those with lower levels overall.  This dilutes the results to some extent, since it is not completely clear how much of an impact either of those factors made on stroke risk compared to stress and anxiety levels alone.

However, with strokes being on the rise even in younger people, we are all smart to do what we can to improve our personal odds.  According to a 2011 study at the Centers for Disease Control and Prevention in Atlanta, Georgia, the rate of strokes in children and younger adults has risen tremendously between 1994 and 2007–including a jump of 51 percent for males between the ages of 15 and 34.3 Gandey, Allison. “Ischemic Stroke Hospitalizations Rising Among Young People.” Medscape. 11 February 2011. Accessed 3 January 2014. http://www.medscape.com/viewarticle/738013   This difference is most likely due to substantial increases in other known stroke risk factors such as obesity, high blood pressure, and diabetes.

And although stress and anxiety are only a couple of a number of potential risk factors for stroke, there is evidence that they also affect other parts of the body.  Anxiety and stress have been implicated in a multitude of ailments, including headaches, rashes, gastrointestinal upset, insomnia, concentration problems, and much more.

There is no such thing as a life completely free of anxiety or stress, of course, but it comes down to how we choose to handle them.  Often a doctor will prescribe a mild tranquilizer such as Xanax or Valium to alleviate symptoms, but this often comes with side effects including dizziness, sleepiness, decreased energy, drop in libido, nausea, skin inflammation, and more.  Instead, you might want to try a more natural approach. Add some natural supplements that relieve stress and anxiety, such as ashwagandha and theanine, to your daily regimen as needed. And massage, meditation, and exercise are all proven stress reducers that can leave you feeling less anxious and more prepared to cope with whatever may come your way next.