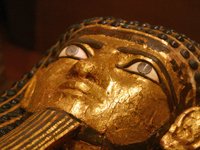 Above the tomb of King Tutankhamun in Egypt an inscription reads, “Death comes on swift wings to those who disturb my rest.”1 “Is King Tut’s Curse Caused by Toxins Produced by Microorganisms?” Qualtest, Inc. 14 March 2013. http://www.qualtestusa.com/KingTutsCurse.html   After the tomb was opened by scientists back in the 1920’s, members of the research team began to drop from strange ailments, some dying strange deaths. If that incident represents the power of the mummy, a whole lot of scientists ought to be quaking in their bed sheets right now.

That’s because under the leadership of Dr. Randall Thompson, a cardiologist at Saint Luke’s Mid America Heart Institute in Kansas City, researchers unpacked 137 ancient mummies and subjected them to CT scans.2 Avril, Tom. “Ancient Mummies Reveal a Modern Affliction.” 12 March 2013. Philly.com. 14 March 2013. http://www.philly.com/philly/health/20130312_Ancient_mummies_reveal_a_modern_affliction.html They were looking for signs of atherosclerosis, which they found in one-third of the long-dead subjects. It’s the same rate of the disease as we have in modern times.

The fact that 47 of the ancient mummies showed plaque build-up in the arteries blows up the commonly held idea that returning to a prehistoric diet would solve our health problems. It also casts doubt on the widely held assumption that it’s largely the modern lifestyle that causes our high rates of cardiovascular disease. The medical community typically blames plaque build-up in the arteries on lack of exercise and a junk-food diet. Flinstones aside, they really didn’t have fast food back in the days of the Sphinx, and people didn’t spend their time watching TV or playing video games.

Previous research had shown evidence of atherosclerosis in Egyptian mummies, but scientists reasoned that mummies came from the upper class, and probably they were individuals who ate rich foods and led pampered lives. This time, though, the mummies came not only from Egypt, but also from Peru, the Aleutian Islands, and the American Southwest. The Southwestern and Aleutian specimens weren’t technically mummies. Rather, they were well-preserved because of the dry or cold conditions in their environments.

Both the Aleutians and the Southwestern peoples were most likely hunter-gatherers, which means they got plenty of exercise and not much in the way of fatty foods. The Southwestern subjects, the researchers say, probably worked hard to survive in the desert environment, living mostly on grains. Still, they had the same rate of clogged arteries as the other mummies.

The researchers concluded that the evidence indicates that atherosclerosis may be a natural part of the aging process, triggered in large part by genetics.

“I think it’s fair to say people should feel less guilty about getting heart disease in modern times,” says Dr. Thompson. “We may have oversold the idea that a healthy lifestyle can completely eliminate your risk.”3 “Even 4,000 year-old mummies had clogged arteries, study reveals.” 11 March 2013. Associated Press. 14 March 2013. http://www.foxnews.com/science/2013/03/11/study-reveals-even-4000-year-old-mummies-had-clogged-arteries

Well, that sure makes the idea of running out for a tiramisu fix seem a lot less pernicious, but before you stuff your face with fries, consider this. Dr. Thompson points out that unknown factors could have been at work in ancient times. For instance, smoking contributes to atherosclerosis and ancient peoples may have spent plenty of time sitting in enclosed spaces next to fires, inhaling smoke.  In another words, lifestyle factors may have gotten them, too. They may also have developed atherosclerosis from chronic infections, kidney disease, or numerous other issues that cause inflammation.

Some experts, including Loren Cordain who wrote the Paleo Diet, insist that just because the mummies developed clogged arteries doesn’t mean they were as vulnerable to heart attack as modern people are. Cordain says that plaque has to rupture for a coronary event to occur. The modern diet, he insists, causes the type of inflammation that leads to plaque rupture. In his studies of indigenous people who lived in the early 1900’s, he found virtually no evidence of heart attacks or strokes, though some of his subjects did have atherosclerosis. Interestingly, the mummies with the clogged arteries typically were older at the time of death than those without–an average of 43 years old versus 32. Also, there’s no evidence that the cause of death was atherosclerosis for any of them.

On the other hand, the ancient peoples typically didn’t live long enough for atherosclerosis to develop to the heart-attack point. The oldest mummy in the study died around age 50, and she was the oldest by far. Many didn’t even live to age 30.

In a sense, whether heredity plays the greatest role in the development of plaque-buildup matters little. Even if heredity does make you more vulnerable to atherosclerosis, eating right and exercising likely diminishes the odds that you’re going to clog your arteries and die. The inverse also is true: if you eat like Henry the VIII, you’re probably going to clog your arteries and keel over whether you have heredity working for or against you. Study after study shows that following a healthy lifestyle prolongs life and that indulging in unhealthy habits shortens life.  If you do have atherosclerosis in your family line, though, you might want to take extra precautions, like introducing proteolytic enzymes, raw foods, and Omega 3’s to your regimen if you don’t already take them.

As for the curse of the mummies, you can’t really blame those ancient ones if they do return to haunt the researchers.  Can you imagine waking up inside a CT machine 4000 years in the future and getting zapped by 200 times as much radiation as you’d get from a chest x-ray? And if those mummies do reanimate, they might be able to sue the physicians for inducing cancer, as CT scans can do.