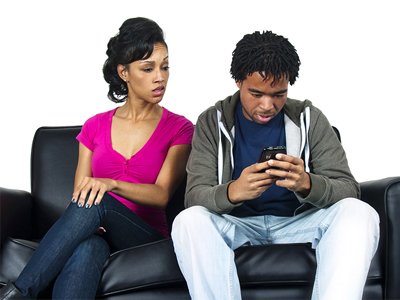 Emily Post, where are you when the world needs you? Back in 1922, when the goddess of manners wrote her Emily Post’s Etiquette, people were fretting about which fork to use at dinner. Who back then could have anticipated a future where dinnerware was replaced by plastic-ware, where dinnertime conversation was interrupted by texting, where people discussed the most private business in public places on smartphones, and where intimate contact got peppered with technology breaks?

We’ve collectively adapted almost overnight to a new, rude ethic in which we pay as much attention to our devices as we do to each other, but a new study that indicates we pay dearly for this trend may serve as a wake up call. Researchers from Penn State and Brigham Young University recently interviewed 143 women and found that 73 percent of them believed that smartphones undermined their close relationships.1 Karnash, Chelsea. “Study: Your Obsession with Your Smartphone is Hurting Your Relationship.” 4 December 2014. CBS Philly. 4 December 2015. http://philadelphia.cbslocal.com/2014/12/04/study-your-obsession-with-your-smartphone-is-hurting-your-relationship/ An astonishing 35 percent reported that their partners regularly picked up their cell phones and focused on them during face-to-face conversations, particularly if the phone caught their attention with a notification, and 25 percent said that their partners texted other people while they were speaking to them.

All this love going out to smartphones apparently is undermining love in the flesh. The scientists found that preoccupation with handheld devices is leading couples to fight over technology–as if warfare over sex, money, and who does the laundry wasn’t enough. Plus, the study found that device use also leads to diminished relationship satisfaction and, in fact, to a lower level of life satisfaction and ultimately to a higher risk of depression. Apparently, of all technological gadgets, computers caused the most alienation between partners, followed by smartphones.2 “Less Tech Means More Sex.” 5 December 2014. XPose Entertainment. 5 December 2014. http://www.tv3.ie/entertainment_article.php?locID=1.803.1098&article=152870

The study authors write, “By allowing technology to interfere with or interrupt conversations, activities, and time with romantic partners–even when unintentional or for brief moments–individuals may be sending implicit messages about what they value most, leading to conflict and negative outcomes in personal life and relationships.” The authors hypothesize that once relationship troubles get set off by technology use, the partners retreat even more into their devices for solace. This causes even more trouble.

Study Director Brandon McDaniel says, “This is likely a circular process that people become trapped in where allowing technology to interfere, even in small ways, in one’s relationship at least sometimes causes conflict, which can begin to slowly erode the quality of their relationship. Over time, individuals feel less satisfied with their relationship as well as with the way their life is currently going. They may not even realize this is happening.”3 “Daily ‘technoference‘ hurting relationships, study finds.” 4 December 2014. BYU News. 4 December 2014. http://news.byu.edu/archive14-dec-technoference.aspx

Even if ignoring the person you’re with to text someone else has become ubiquitous behavior, those who are recipients of that behavior may feel punched in the gut. Professor James Roberts from Baylor University coined the term “phub” back in 2012–a combination of the words ‘phone’ and ‘snub.’ It refers to what happens when someone who you’re with talks on their phone or texts instead of paying attention to you. “Cell phone attachment is positively related to an increase in stress and anxiety and even depression,” he says. “Essentially, what we are saying [when we text or talk in the midst of other company] is that you don’t matter. It touches at our core.”

While the study cited above involved only 143 participants, the trend it reveals will strike true for anyone who has recently visited a café or casual restaurant. Unless the place explicitly forbids cell phone use, couples sit across from each other with their devices out on the table, poised and ready, and at some point or other, one of the parties at the table is going to pick up their device and use it. Maybe both of them will do so.

After receiving a press release about this study, CBS Philly conducted an online survey asking readers if smart phone use was undermining their relationships, and, at last count, 82 percent of the respondents said yes. Of those respondents, nearly 50 percent said cell phones were getting in the way of relationship contact quite a lot, and another 33 percent said “a little.”

Even the scientists doing the research admitted that they personally were letting technology interfere with their face-to-face contact with others. Sarah Coyne, another of the study directors, says, “It’s a wake-up call to me because I realized I’m doing this too. That’s insane to say that as a professional who researches this, but we can let these devices overrule our entire lives if we allow it.”

What if instead of texting other people, you concentrate on texting your partner? Will that minimize problems stemming from technology use? Apparently not, and in fact, sending too many texts to your beloved can actually weaken the relationship, or at least, it might indicate that the relationship is on the skids already. A study out of Brigham Young University last year found that men who texted their partner often were more dissatisfied in their relationships than non-texting men. Likewise, men who received lots of texts from their partners were less happy with their partners than men who didn’t get texts. Women, on the other hand, felt more secure if they had an active texting relationship.

The problems compound when couples use texting to fight or resolve sticky problems.4 Shute, Nancy. “Too Many Texts Can Hurt a Relationship, But <3 Always Helps.” 31 October 2013. NPR Shots. 4 December 2014. http://www.npr.org/blogs/health/2013/10/31/242080748/too-many-texts-can-hurt-a-relationship-but-3-always-helps When fighting in person, people can read each other’s body language, can hear tone of voice, can see how much the other person hurts. But texting captures only angry language, and so it can seem much harsher than in-person confrontation. Plus, the angry message stays on the device to remind the recipient of the sad interaction, which can keep the pain alive.

The one exception to the “minimize texting to keep love alive” rule is that couples seemed to benefit if text messages were explicitly romantic. In other words, an “I love you” text or “I miss you” once a day can’t hurt, and might actually help increase intimacy. The experts recommend that couples devise technology rules, such as “no texting while we’re together” and “no computer use after dinner.” Otherwise, given the addictive nature of our devices and the persistence with which they beep for attention, intimacy may start slipping away before you notice it happening.