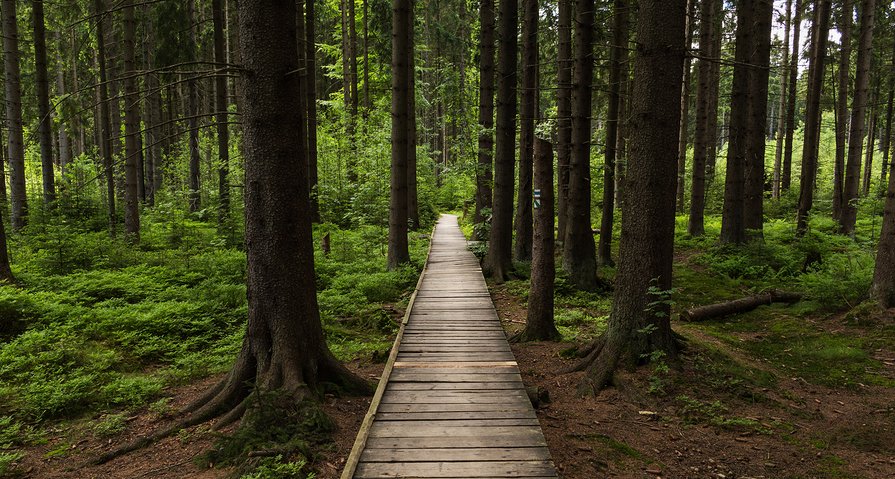 In her celebrated book Silent Spring, author Rachel Carson wrote, “Those who contemplate the beauty of the earth find reserves of strength that will endure as long as life lasts. … There is something infinitely healing in the repeated refrains of nature.” Those words speak to a truth many of us know instinctively. When we need to be uplifted, we crave the beach, the mountains, trees and flowers, things green and alive. Time spent in nature makes life seem less ugly and our troubles feel less troubling, and in fact, studies show that immersion in nature has real power to heal both body and mind.

In Japan, a practice called shinrin-yoku, or “forest bathing,” was developed in the 1980s to help stressed out citizens restore well-being.1 http://www.shinrin-yoku.org/ Forest bathing spread rapidly after that, and now practitioners worldwide tout the benefits.  The practice involves paying attention to sensory experiences while hanging out with the trees—in other words, bathing the senses with the sounds, scents, and sensations in the forest using mindfulness meditation techniques. According to the shinrin-yoku website, the practice boosts immune function, reduces blood pressure, improves focus in those with ADHD, speeds healing after illness or surgery, eases insomnia, and increases your energy level. Plus, it brings extras like enhanced happiness and sharper intuition.

And before you scoff, these assertions aren’t based on tree-hugging wishful thinking, but rather, hard research. A 1990 study out of Chiba University in Japan found reduced levels of cortisol, the “stress hormone,” in subjects who walked 40 minutes in a forest, compared to subjects who walked 40 minutes in a lab setting.  While it’s true that walking anywhere is good for health, research makes clear that it particularly pays to take that hike in the woods. A 2010 study compared subjects who walked city streets to those who walked in the forest. Those in the forest group not only had a 12.4 percent greater reduction in cortisol levels compared to the city walkers, but also significantly greater reductions in blood pressure, pulse rate, and heart rate.2 Park, BJ, et al. “The physiological effects of Shinrin-yoku (taking in the forest atmosphere or forest bathing): evidence from field experiments in 24 forests across Japan.” 15 January 2010.  Environmental Health Preventative Medicine. 8 December 2017. http://www.ncbi.nlm.nih.gov/pubmed/19568835 Plus, time spent among the trees boosts immune function. In an extraordinary study in 2007, researchers found that participants who took two-hour walks in the woods for just two days running increased the number of immune “killer cells” in their blood by 50 percent.

More Research on The Health Benefits of Nature

In a related study, participants just stared at forest scenery for 20 minutes, no walking required.  The results showed an average reduction of 13.4 percent in salivary cortisol. As we’ve written before, high cortisol levels are related to anxiety, insomnia, exhaustion, and vulnerability to disease. These effects spill over into all aspects of life: workers who have a pastoral view out of their office window register greater job satisfaction and less job stress than those who can’t see nature all day, meaning even if you’re trapped inside an office, you can benefit from nature if the view is good.3 Friedman, Lauren F. and Loria, Kevin. “11 scientific reasons you should be spending more time outside.” 22 April 2016. Business Insider. 9 December 2017. http://www.businessinsider.com/scientific-benefits-of-nature-outdoors-2016-4/#1-improved-short-term-memory-1 In fact, a 1984 study of gallbladder patients found that those who had a view of trees healed faster and tolerated pain better than those who only viewed a wall.4 “How Does Nature Impact Our Wellbeing?” University of Minnesota. 9 December 2017.http://www.takingcharge.csh.umn.edu/enhance-your-wellbeing/environment/nature-and-us/how-does-nature-impact-our-wellbeing Similar research led some hospitals to begin decorating patient rooms with plants and paintings of nature.

The benefits go on and on. A University of Michigan study sent one group of students on a walk around a city block and another group for a walk in an arboretum. The students all took memory tests before and after the walks. Those who walked in nature had a 20 percent boost in their memory scores after the excursion, while those walking in the city reaped no memory benefits at all. Likewise, several studies show that being outdoors reduces inflammation, while research in both Australia and Taiwan found that children who played outdoors for significant amounts of time had less than half the incidence of myopia compared to children who participated mostly in indoor sports. Plus, a study cited in PLOS One found that after four hours of immersion in nature, participants boosted creative problem-solving scores by 50 percent.5 Atchley, Ruth Ann and Strayer, David. “Creativity in the Wild: Improving Creative Reasoning through Immersion in Natural Settings.” 12 December 2012. PLOS One. http://journals.plos.org/plosone/article?id=10.1371/journal.pone.0051474 And finally, spending time in nature seems to reduce mortality rates by a significant margin and to reduce the incidence of various cancers.

Could Trees Be Healing?

Scientists hypothesize that all these benefits aren’t the result of sylvan fairies who sprinkle magic dust on those who walk among the trees, but rather, that trees emit certain substances that have a positive influence on health. For one thing, certain trees, such as cedar and other evergreens, disperse essential oils that may have anti-microbial and immune-boosting action.6 “What is Forest Bathing and How it Can Slash Stress and Boost Immunity.” 22 December 2015. Nutriunify. 9 December 2017. http://nutriunify.com/what-is-forest-bathing-and-how-it-can-slash-stress-and-boost-immunity/ Within these oils are compounds known as phytoncides that may stimulate immune cells, and the effects increase with prolonged exposure. Research indicates that the level of phytoncides in the air correlates to the degree of immune function improvement. Plus, certain trees emit a citrus-like fragrance that apparently stimulates neuroendocrine hormones such as oxytocin, the “feel-good” hormone, which might account for research indicating that exposure to forest fragrance worked better than antidepressants in alleviating depressive symptoms. On the other hand, since research shows just looking at trees from afar or even via a photograph also confers benefits, there’s clearly something more at work.

Given the obvious and manifold benefits of exposure to trees and things bucolic, it seems a no-brainer that we should all don hiking boots and get out in the woods. And yet, most of us lead indoor lives and stare at computer screens and TVs for hours and days on end.  According to the EPA, the average American spends only seven percent of his or her time outdoors, with six percent of waking hours driving around in cars and the other 83 percent of available time inside a building of some sort.7 “How Much Time Does the Average American Spend Outdoors?” 10 July 2017. SnowBrains. 8 December 2017. http://snowbrains.com/brain-post-much-time-average-american-spend-outdoors/ The trend indoors increases by the year. In 2007, a study found that the average American spent 25 percent less time outdoors compared to the average person 20 years previous, while a 2016 study found that children today spend only half as much time playing outdoors compared to when their parents were kids.8 http://www.pnas.org/content/105/7/22959 “Children spend only half as much time playing outside as their parents did.” 27 July 2016. The Guardian. 8 December 2017. http://www.theguardian.com/environment/2016/jul/27/children-spend-only-half-the-time-playing-outside-as-their-parents-did Today, due to COVID-19, we are getting out less and less.

If you’re lucky enough to live and work in a beautiful natural setting, be wise and take advantage of it. If not, let the research be your guide. Decorate your space with plants and pastoral scenes, enjoy a nearby park, plant more trees or shrubbery in your backyard, expose yourself to nature as often as possible, and remember to eat well, exercise, regularly detoxify your system, and take supplements to boost your immune system to compensate for your nature deficit.