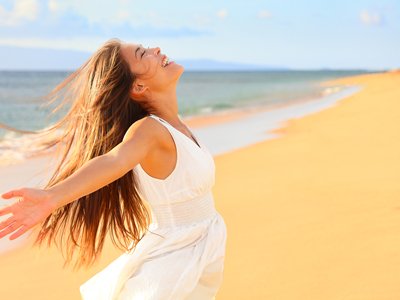 If you’ve ever seen the sun set in all its incredible hues over the ocean or walked through a tropical forest where people are far outnumbered by creatures, you understand the majesty that can be found in nature. Similar feelings can arise from getting a chance to behold incredible artwork or becoming swept up in a profound spiritual moment. These experiences, and the awe they produce, can feed the soul. And now, new research suggests they may very well make a positive difference in the body as well.

The study, which took place at the University of California, Berkeley, found that the positive emotions we experience when exposed to nature, art, and spirituality may result in an anti-inflammatory effect within the body and offer some measure of disease protection.1 Gregoire, Carolyn. “Experiences Of Art, Nature And Spirituality May Help Prevent Disease, Study Finds.” Huffington Post. 4 February 2015. Accessed 11 February 2015. http://www.huffingtonpost.com/2015/02/04/natural-anti-inflammatori_n_6613754.html The subjects were more than 200 young adults who participated in one of two identical but separate trials.

The volunteers were interviewed about the extent of the positive emotions they felt that particular day. The emotions were defined as love, joy, pride, awe, amusement, compassion, and contentment. In addition, the same day that the subjects went to the lab and discussed their feelings, the scientists took small samples of tissue from their cheeks and gums. The samples were used to assess the levels of cytokines present in each person’s body on that day.

Cytokines are chemicals released by cells of the immune system that, among other things, trigger inflammation. This is important as we use inflammation to help repair injuries and overcome illnesses and infections. However, when cytokine levels are chronically elevated due to an immune system that is out of balance, the chronic inflammation that results is very damaging over time. Evidence has been found that it may contribute to cancer, diabetes, cardiovascular disease, autoimmune disorders, Alzheimer’s disease, and depression.

But back to the study. When the researchers tested the participants’ tissue samples, they discovered that the individuals who registered positive emotions that day had corresponding lower cytokine levels. This was the case in both of the experiment’s trials. And with decreased levels of cytokines there comes reduced inflammation throughout the body.

While it is harder to measure emotions than more tangible physiological responses, we do know that our mental and emotional well-being is tied closely to our physical health in other ways. Jon Barron devoted an entire chapter of his book, Lessons from the Miracle Doctors, to the subject: The Thought that Kills. And a 2011 study at Concordia University in Montreal, Canada, found that depression may lead to a higher risk of heart disease.2 Gordon, Jennifer L.; et al. “The effect of major depression on postexercise cardiovascular recovery.” Psychophysiology. 1 August 2011. Accessed 12 February 2015. http://onlinelibrary.wiley.com/doi/10.1111/j.1469-8986.2011.01232.x/abstract So it only makes sense that our emotions can affect us in positive ways as well. The new research appears to add to the growing body of evidence of just how much our feelings can affect our health. One example was a 2013 study at the University of North Carolina at Chapel Hill that showed experiencing affirmative emotions was associated with improvements in heart rate and breathing patterns that benefit coronary health.3 Kok, Bethany E.; et al. “How Positive Emotions Build Physical Health.” Psychological Science. 6 May 2013. Accessed 12 February 2015. http://pss.sagepub.com/content/24/7/1123.abstract With daily doses of positive thinking, we might very well reduce stress levels, as well as inflammation levels, and reverse some of the damage they cause over the long term.

Obviously, it is fairly difficult to attempt to quantify certain emotions. It’s also worth considering that what might impact one person significantly might only be a fleeting thought to another. For example, visiting a museum and looking at an original Picasso might inspire awe and profound feelings within some individuals, whereas others think, “That’s a piece of …..”

In other words, not everything is breathtaking to everyone, and it’s up to each of us to figure out what it is that produces these emotions in ourselves. Remember also that the researchers listed among the essential feelings love, pride, compassion, and contentment, so it’s probably not necessary to travel thousands of miles to the Taj Mahal to evoke the right reaction; your significant other, child, or dog might elicit strong enough emotions to do the trick. Whether it’s derived from a passionate sermon, a walk on a mountain, or simply holding the hand of someone you care for, let yourself appreciate these moments and make sure they’re not few and far between.