Smart Phone Use and Inactivity 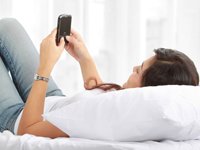 In recent years, cell phones have joined the pantheon of items most of us can’t live without. Televisions, cars, washing machines, and so many more modern conveniences are things we have come to depend on to make life easier and more enjoyable.  Now, smart phones have become part of that trend, especially for young people.  The thought of having accidentally left your cell phone at home sends most people into a major panic.  But according to new research, smart phones may turn out to have a substantial downside: the more you use them, the less fitness and exercise you may engage in.

The study, which was conducted at Kent State University in Ohio, showed that high volume smart phone users tend to have lower fitness levels than their peers who don’t use their phones as often.1 Hamilton, Michelle. “Frequent smart phone use linked to poor fitness.” NBC News. 15 July 2013. Accessed 22 July 2013. http://www.nbcnews.com/health/frequent-smart-phone-use-linked-poor-fitness-6C10642276   The subjects were more than 300 college students residing in the Midwest.  Each participant was asked questions about the frequency of their cell phone usage–not just for calls or texts, but for emailing, game playing, watching television, reading, and so on.  They were also asked about their regular physical activities.  It was hardly shocking that the researchers found the volunteers who logged the most time on their smart phones tended to be considerably less active when compared to their counterparts who spent the least time using their phones.

The key here is that the differences in the amounts of time the students devoted to their phone usage were enormous. Some of the subjects were practically attached to their phones, using them an astounding 14 hours a day. This is double what studies found just three years ago.  Presumably they were multitasking while on the phone (as rude as that is to their companions), but even still, that only leaves 10 hours for sleeping, showering and other hygienic pursuits, classes, studying, dating, and whatever else college students are busy with nowadays.  These frequent users reported spending many hours using their phones to view movies, advance themselves in video games, peruse statuses on Facebook, and tweet away.  Clearly, it leaves little to no time for exercise for the majority of them.

But it becomes somewhat of a chicken or egg conundrum to determine whether the phone is promoting this sedentary lifestyle or the subjects are on the phone so much because they are not interested in moving their bodies or doing much of anything else.  Having a smart phone probably does worsen the problem for technology addicts because it makes it so easy to remain perpetually plugged in without isolating yourself.  For instance, pre-smart phones, if you wanted to watch movies all day or sit at the computer, that meant that you had to stay home alone or with a few like-minded individuals.  Now, however, your ability to maintain contact on the phone and be watching, playing, updating, and the like has become totally portable and can be done in class, waiting in line, while eating a meal…essentially during any activity except sleeping. And we won’t even talk about how many people sleep with their smart phones turned on beside them.

In contrast, the students who reported the least smart phone usage–which was still hardly negligible at an average of slightly more than 90 minutes per day–set aside more time in their days to work out.  Some of them even reported that their phones provided a bit of motivation toward fitness.  These subjects would use their phones to keep in touch with similarly active friends.  So a smart phone isn’t all bad if you are using it to meet up with a pal for a bike ride, check the class schedule at the gym, find out the forecast to come prepared for a hike, or use an app that will help you keep track of the calories you are burning.  But choose your apps wisely.  A 2012 study at Brigham Young University in Provo, Utah, found that the majority of apps lack the customization that can provide a worthwhile, helpful fitness program.2 Cowan, Logan T.; et al. “Apps of Steel: Are Exercise Apps Providing Consumers With Realistic Expectations?” Health Education & Behavior. 17 September 2012. Accessed 23 July 2013. http://heb.sagepub.com/content/early/2012/09/17/1090198112452126.abstract

The bottom line is that we can blame technology all we want for our lack of activity, but it really just makes for one more convenient excuse.  If we don’t want to end up overweight and unhealthy, it’s essential to start exercising every single day to achieve natural weight loss…even if it means disconnecting from technology for an hour or two.  Which is probably not such a bad idea anyway, considering there is still no definitive answer on how the electromagnetic radiation emitted by cell phones affects our brains.

Gallery image with caption: A Sedentary Lifestyle is as Harmful as Obesity