Marathon Running and the Heart 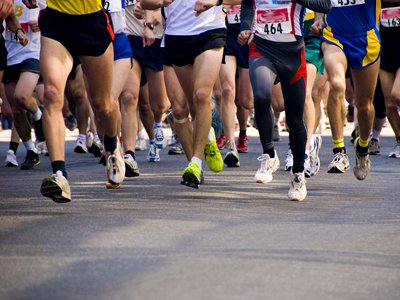 Those of us who enjoy physical activity are often looking to try different forms of exercise to keep the routines from getting stale and put variety in the workout. Often, people who are joggers consider stepping up their game and adding an endurance component by training for a marathon. After all, if a little aerobic exercise is good for the heart, a lot is probably better, right? While the jury is still out on how much is too much and marathon running is definitely not the fitness answer for everyone, new research does suggest that it can lower the risk of developing heart disease for middle-aged men.

The study, which was conducted at Massachusetts General Hospital in Boston, found that middle-aged guys who are recreational runners appear to derive cardiovascular benefits from the intensive type of training needed to physically prepare for a marathon.1 “Marathon training could help the heart.” Science Daily. 27 March 2014. Accessed 2 April 2014. http://www.sciencedaily.com/releases/2014/03/140327100812.htm The subjects were 45 men between the ages of 35 and 65. All of them had some experience with running for exercise and were interested in participating in the 2013 Boston Marathon but had not achieved the necessary time qualifications for the race. Roughly half of these volunteers had participated in at least three marathons at some point in their lives, and the remainder had participated in fewer than three.

The experiment was designed around a marathon-training program lasting 18 weeks. The participants were involved in group runs, workouts focused on building endurance, training guidance, the use of local exercise facilities, nutritional counseling, coaching on pacing and how to properly prepare for a marathon, and correspondence to answer their questions. The subjects were then given instructions on how many miles to run each particular week, ranging from 12 to 36, based on the training stage. The volunteers kept running logs in which they reported their activity so the scientists could keep track of their progress and observance of the directions.

Each participant was given a thorough examination before the study began, including a cardiopulmonary stress test, imaging tests of the heart, and a check of cholesterol levels. Approximately 53 percent of the subjects–24 of the 45 men–were found to have one or more risk factors for heart disease such as hypertension, elevated cholesterol, or a family history of cardiovascular illness. At the end of the 18 weeks of training, the volunteers were examined once again, and the researchers discovered that their LDL, or “bad,” cholesterol levels dropped by five percent; total cholesterol levels decreased by four percent; and triglyceride levels plummeted by 15 percent. In addition, they attained a one percent reduction in BMI and a four percent boost in peak oxygen consumption, a measurement of aerobic fitness and potential endurance abilities.

While these results do appear promising, it is definitely too soon to start recommending that everyone begin marathon training to improve their health. First of all, this study was based on a very small, very narrow sampling of the population so it is impossible to say whether the same benefits would be derived for other people. Plus, the intensive exercise needed to properly prepare for a marathon is far too much for the average couch potato to jump right into–it would take a long time for sedentary types to work themselves up to running many miles every week.

Plus, just to confuse things, there is also plenty of evidence that contradicts these findings and suggests that optimal heart health is best achieved by shorter bouts of vigorous activity. In fact, a 2012 study at Saint Luke’s Mid America Heart Institute in Kansas City, Missouri, found that marathon training may be dangerous to the cardiovascular system.2 O’Keefe, James H.; et al. “Potential Adverse Cardiovascular Effects From Excessive Endurance Exercise.” Mayo Clinic Proceedings. June 2012. Accessed 3 April 2014. http://www.mayoclinicproceedings.org/article/S0025-6196(12)00473-9/fulltext Performing intense endurance-oriented exercise over the long term was associated with a measurable wear-and-tear type of damage to the heart involving both its structure and electrical function. In comparison, more moderate forms of exercise were shown to provide a greater amount of cardiovascular benefits in sessions lasting 30 to 50 minutes.

And then, in a study just published in the journal Missouri Medicine, it was concluded that marathon runners “paradoxically” had more coronary plaque than sedentary people.3 Richard Chin. “Too much running could accelerate heart problems, study suggests.” 04/03/2014. San Jose Mercury News. (Accessed 3 April 2014.) http://www.mercurynews.com/health/ci_25485207/too-much-running-could-accelerate-heart-problems-study As Robert Schwartz, a Minneapolis Heart Institute Foundation researcher, and his fellow researchers wrote, “An emerging body of scientific data” is starting to suggest that “chronic, high-intensity exercise” may be stressing the heart and accelerating problems like plaque build-up and cardiac chamber stiffness.

Until a verdict can be reached more conclusively, it is probably safer for the majority of us to forgo marathon training in favor of less rigorous and extreme forms of activity. Running is a great workout, but 45 minutes at a time is enough for most recreational athletes. As Jon Barron points out, you are better off, in terms of overall health and fitness, focusing on a more well-rounded routine that includes not only cardiovascular/interval exercise, but strength training, flexibility, and balance exercises as well.

Gallery image with caption: Is Pollution Making It Dangerous to Walk?

Gallery image with caption: A Sedentary Lifestyle is as Harmful as Obesity