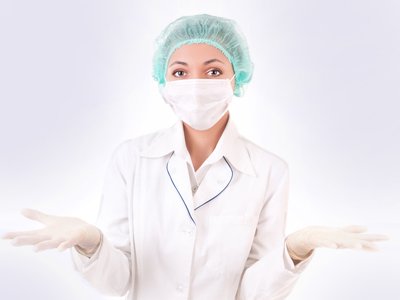 Most of us who have been around the block a few times don’t need a study to let us know that doctors make major diagnostic mistakes. Within the last five years, I was told I had lupus when, in fact, I had typhoid fever. A friend of mine was told she had a slipped disk when, actually, she was dying from lung cancer. Another (long-time married) friend went through the embarrassment of receiving a syphilis diagnosis when, actually, he was ill with leptospirosis. You may well have your own stories.

In spite of the frequency with which so many of us witness such errors, the press has been featuring a recent study revealing that one in 20 people receives a wrong diagnosis at an outpatient clinic each year, as if that’s shocking news.1 Rettner, Rachael. “12 million misdiagnoses occur yearly in the US.” 17 April 2014. Mother Nature Network. 17 April 2014. http://www.mnn.com/health/fitness-well-being/stories/12-million-misdiagnoses-occur-yearly-in-us The most shocking part of that finding may actually be that the figure reported is so low. In fact, as we will see in a bit, the study so narrowly defined its parameters that the real number is likely much higher.

The study, out of Baylor College and the VA Medical Center in Houston, was just published in BMJ Quality and Safety. It concluded that of the 12 million individuals in the US who get misdiagnosed each year, about six million, or 50 percent, will suffer serious harm from the error.  In fact, according to the Society to Improve Diagnosis in Medicine, about 80,000 people die annually because of diagnostic blunders.2 Levy, Sandra. “One in Every 20 Adults is Misdiagnosed in Outpatient Clinics Every Year.” 17April. 2014. Healthline News. 17 April 2014.http://www.healthline.com/health-news/american-adults-misdiagnosed-outpatient-clinics-041714 Misdiagnosis also is the leading factor in medical malpractice suits.  The study defined misdiagnosis as meaning cases in which doctors missed symptoms that the patient clearly displayed, or when doctors failed to properly follow up on abnormalities detected. But that still leaves lots of gray area such as noticing the symptoms, but misinterpreting them, or when two very different conditions present with similar symptoms.

Analysts point out that detecting misdiagnosis is a difficult task. It’s easier to identify medication errors or other medical mistakes that occur in hospitals, but tracking outpatients is another thing entirely, especially because it may take a series of visits to the doctor before the diagnostic mistake becomes clear.  To conduct this study, the researchers culled records of outpatients to find those who returned to the clinic “unexpectedly,” soon after their initial diagnosis.  They also looked for cases where patients had unusual lung x-rays or a positive result on a colon cancer screening, and yet the doctor didn’t follow up. In fact, a large percentage of the errors reported in this study involved cases where doctors neglected to follow up after patients had suspicious test results.

Study director Dr. Hardeep Singh notes: “Delayed cancer diagnosis is believed to be one of the most harmful and costly types of diagnostic error in the outpatient setting.” The other leading conditions frequently misdiagnosed by physicians are heart failure, pneumonia, anemia, spinal cord compression, and kidney failure, says Singh.

What’s causing all these wrong diagnoses? Singh explains, “When a patient comes in with a lot of undifferentiated symptoms, in primary care the diagnosis evolves over time and you might start with a certain work-up, but that changes.” But again, this study excluded cases where symptoms evolved over time, focusing only on those cases where doctors missed symptoms already present.

At least one problem with the methodology used in the study is that patients often go to other doctors when their symptoms worsen. They’ll either switch to a specialist or seek a second opinion. Tracking return visits to the initial doctor won’t catch all those who have gone elsewhere, and a huge percentage of patients do move on. Also, there’s every possibility that at least some medical errors don’t get documented, and those errors wouldn’t show up in a review of records. And finally, the definition of misdiagnosis as used in the study leaves plenty of room for interpretation. The study only counted cases when “symptoms were clearly present,” but what about those cases where a collection of subtle signs and emerging symptoms indicate problems that could be could be identified given a little more digging and analysis?

Part of the dilemma is that doctors simply don’t have time anymore to do the sort of listening that would allow them to add two and two together. Dr. Jon Lapook, who is the Chief Medical Correspondent at CBS News says, “Doctors’ visits these days tend to be rushed, just not having enough time to talk to the patient, to communicate, to get a sense of what’s going on. That’s a big problem.”3 Millions of Americans misdiagnosed every year.” 17 April 2014. CBS News. 17 April 2014. http://www.youtube.com/watch?v=1Z7k2tNcYj0

But another problem is that solo, general practitioners, the Marcus Welbys of the world, are a dying breed.4 “SURVEY: SEARCH FOR SOLO DOCTORS COMING TO AN END.” Merritt Hawkins July 2, 2012. (Accessed 18 April 2014.) http://www.merritthawkins.com/uploadedFiles/MerrittHawkins/Pdf/mha2012incensurvrelease.pdf They are being replaced by primary care physicians and specialists. Unfortunately, whereas GP’s live in the community in which they work and know their patients and their family histories intimately, the average face-to-face clinic visit with a primary care physician lasts a mere 12 minutes, give or take.5 Daniela Drake, “How Being a Doctor Became the Most Miserable Profession.” The Daily Beast. 14 April 2014. (Accessed 19 April 2014.) http://www.thedailybeast.com/articles/2014/04/14/how-being-a-doctor-became-the-most-miserable-profession.html Is it any wonder that mistakes are made? And as for specialists, they’re great at what they do, being a specialist narrows your field of vision. You tend to relate all symptoms you see to your specialty. Or as the old adage goes: to a carpenter, everything looks like a nail. It’s the GP who’s seen a bit of everything who has the best chance of seeing the big picture–before the specialists join in to start narrowing things down.

In addition, as Dr. Singh points out, some doctors feel compelled to offer diagnoses to patients even in the face of uncertainty.6 Woerner, Andrea. “At least 1 in 20 outpatients misdiagnosed each year, study shows.” 17 April 2014. Fox News. 17 April 2014. http://www.foxnews.com/health/2014/04/17/at-least-1-in-20-outpatients-misdiagnosed-every-year-study-shows/  “When there’s uncertainty, that’s the time to tell the patient, ‘I think I’m right, but there’s a good chance I’m not, so please follow up with me in two days if you do not feel better.’ And then the patient feels like, ‘Oh the doctor did tell me he could have been incorrect, I have a fever today, so I’m going to call him now.'” In other words, admitting uncertainty empowers the patient, plus it has the added advantage to doctors of protecting them from wrongful practice suits.

The medical community seems to be reacting to the study by urging patients to take more responsibility for their medical outcomes. They say that patients should prepare ahead of time for visits to the doctor, making complete lists of their symptoms so that they don’t leave out key diagnostic information. They also suggest that patients insist on elaborating their family history when that might be relevant.  In fact, Dr. Lapook advises patients to get a little aggressive if need be.

Says Singh, “We are going to need to have more engagement and empowerment in patients in order to take this issue forward… If I express uncertainty that your diagnosis is bronchitis, and you may also have heart failure, then if you get swelling in the legs or your breathing gets worse, I want you to come back and see me tomorrow or the day after. We want doctors to express uncertainty, but we also want patients to come back and see us.”

The statement may be smeared with a generous helping of patient-blaming, but there’s certainly truth in it.  Patients do need to seize the reins and advocate for themselves given the conditions under which doctors work and the realities of the medical world these days. The bottom line is that once again, we see that physicians are not Gods of Healing–but in fact, exceedingly human and prone to all the errors that humans make.