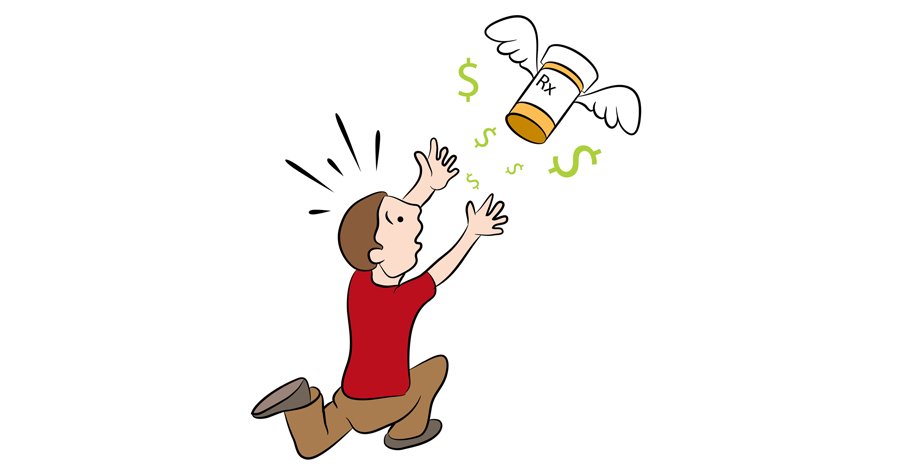 The buyer needs a hundred eyes, the seller but one. Italian Proverb.

If you walked into Starbucks tomorrow and instead of the usual $2.95 charge for an Americano coffee, the bill came to $162.50, what would you do? Laugh? Certainly, you wouldn’t cough up the money–not for one small coffee. That price would seem ridiculous.

That is–unless your life depended on that cup of coffee. In that case, you might dig deep into your wallet and pay whatever amount the clerk asked for, and if the clerk wasn’t ethical, the sky would be the limit. Desperation makes it hard to be frugal.

Sadly, the moguls that run some of the pharmaceutical companies in the US seem to operate by this principle, as evidenced by a spate of recent price-gouging incidents. The most recent episode involves a drug called Daraprim, which is used to treat life-threatening parasitic infections.1 Walters, Joanna. “Martin Shkreli: entrepreneur defends decision to raise price of life-saving drug 50-fold.” 22 September 2015. http://www.theguardian.com/business/2015/sep/21/entrepreneur-defends-raise-price-daraprim-drug  It’s commonly used for AIDS and cancer patients with compromised immune systems. A few months ago, the medicine cost $13.50 for each pill.  Overnight, the price rose by 4000 percent to a staggering $750 per pill. The reason? The drug was bought by the Turing Company for $55 million dollars, and the company wanted to recoup what it spent, fast.

According to Turing CEO Martin Shkreli, “The drug was unprofitable at its former price; this drug was practically being given away, so people are sort of fooled by the math. We needed to go to a price where we could turn a profit.”2 Johnson, Carolyn. “How an obscure drug’s 4000 percent price increase might finally spur action on soaring health care costs. 21 September 2015.The Washington Post. 21 September 2015. http://www.washingtonpost.com/news/wonkblog/wp/2015/09/21/how-an-obscure-drugs-4000-price-increase-might-finally-spur-action-on-soaring-health-care-costs

Before you get sucked into Shkreli’s sob story, consider that when he says “fooled by the math,” he’s referring to the fact that some media outlets reported the drug price had increased by 5000 percent, when in fact, the increase was “only” 4000 percent.  Add to that the fact that Daraprim has a long and steady record as a cash cow. The drug has been on the market for 62 years, so it’s hardly a risky investment.3 Pollack, Andrew. “Drug Goes from $13.50 a Tablet to $750, Overnight.” 20 September 2015. New York Times. 21 September 2015. http://www.nytimes.com/2015/09/21/business/a-huge-overnight-increase-in-a-drugs-price-raises-protests.html In fact, prior to 2010, the drug cost $1 per pill. Since then (and before acquisition by Shkreli’s company), Daraprim profits spiked to 15 times the 2010 revenues.

In an impressive show of double talk, Shkrelli stressed the fact that the drug is rarely prescribed and so the high price tag won’t matter much to the health care system. He also said that he intended to use the profits reaped to develop more effective drugs.

“This isn’t the greedy drug company trying to gouge patients, it is us trying to stay in business,” Mr. Shkreli said. “This is still one of the smallest pharmaceutical products in the world. It really doesn’t make sense to get any criticism for this.”

Teased apart, his statements basically mean that there should be no relationship between manufacturing costs and the prices consumers pay. If it costs $2 to make and market a product, according to his logic, it’s okay to price it at $10 if there are competitive products, but if it’s the only game in town and consumers are going to die without it, then it’s okay to raise the price to, say, $10,000.

One might think that Mr. Shkreli is an anomaly, hardly representative of other leaders in the pharmaceutical industry. At 32-years-old, he already had made his mark as a ruthless and greedy businessman before going to Turing. As a hedge fund manager, he became notorious for putting pressure on the Food and Drug Administration to reject drugs that came from companies that competed with his stocks.  He also was fired just a few months ago from Retrophin, another pharmaceutical company, for unethical use of company funds.

But Turing is hardly alone in its bandit price-gouging practices. A company called Rodelis Therapeutics, for instance, acquired an important tuberculosis drug called Cycloserine recently and escalated the price from an already expensive $500 for 30 pills to a ridiculous $10,800. Who can afford that? Rodelis defended itself by claiming it gave the drug away for free to some patients who couldn’t afford it.  Meanwhile, Valeant Pharmaceuticals raised the price of its heart drug, Isuprel, by 525 percent. It also raised the price on Nitropress, another heart drug, by 212 percent.

Although the strategy for these companies seems to be to acquire niche drugs that a relatively small number of patients need to survive and then to raise prices in to the stratosphere, there are also some drugs in common use that have seen crazy increases. For instance, Doxycycline, an antibiotic that is important for those allergic to penicillin, recently went from $20 a bottle in to $1849 in a six-month period. In fact, according to an AARP Public Policy Institute study last year, the shelf price of more than 200 drugs increased by an average of 12.9 percent, which is faster than inflation, faster than in years past, and far in excess of any increase in consumer income. And the sharp increases cut across the board, including across generic medications.

At least not everyone in the pharmaceutical game employs such exploitive methods. The company that sold Cycloserine to Rodelis Therapeutics apparently watched in horror as the new owner jacked up the price.4 Turkel, Dan. “A huge overnight price increase for a tuberculosis drug just got reversed.” 21 September 2015. Business Insider. 22 September 2015. http://www.businessinsider.com/tuberculosis-drug-price-hike-rescinded-2015-9   The original owner was the university affiliated Purdue Research Association, which decided to buy the drug back. According to Purdue Dan Hasler, “We said [to Rodelis], this was not what we had intended.”

And we wonder why health care costs in the US are so out of whack?

Update: On Sept 23rd, Mr. Shkreli announced that Turing would lower the cost of Daraprim.5 Andrea Mitchell, Phil Helsel. “Drug CEO Will Lower Price of Daraprim After Hike Sparked Outrage.” CNBC 23 Sep 2015. (Accessed 24 Sep 2015.) http://www.cnbc.com/2015/09/22/drug-ceo-will-lower-price-of-daraprim-after-hike-sparked-outrage.html Although he did not announce what the new price would be, he did say that lowering the price “is absolutely a reaction — there were mistakes made with respect to helping people understand why we took this action, I think that it makes sense to lower the price in response to the anger that was felt by people.” Thus proving that although Mr. Shkreli may not have a conscience, he does at least have an awareness of market pressures.