The End of the Office Visit 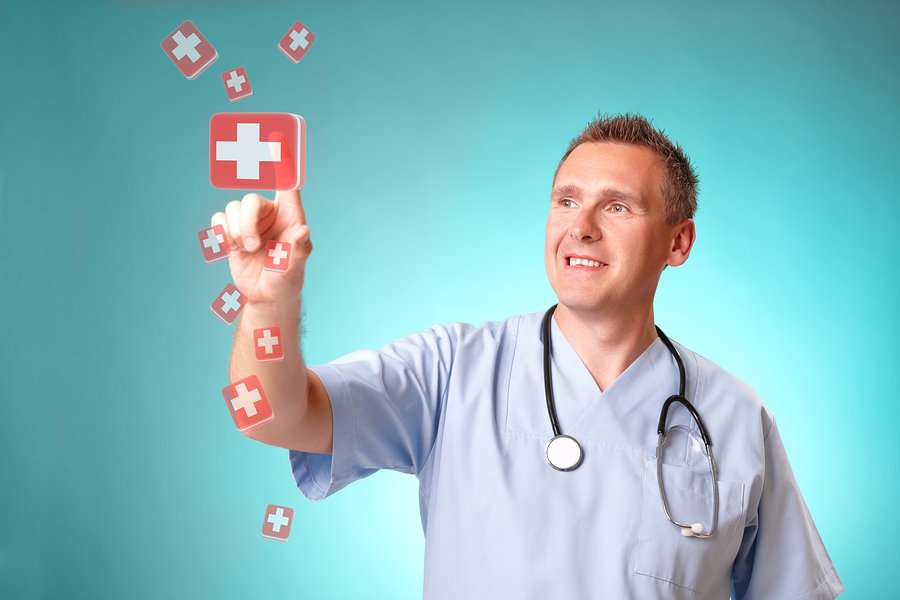 On Star Trek Voyager, the doctor onboard ship was actually a hologram-a computer-generated program in human form designed to treat emergencies. While Western medicine hasn’t quite progressed to the holographic stage yet, new innovations are turning the field into something that our parents might not recognize, and that we, in fact, might not recognize in a few years.

One evolving new direction is an increase in the use of telemedicine. Telemedicine is when doctors diagnose and treat their patients from a remote location. They might work with patients by telephone, computer, closed circuit television, smart phone, tablet device, or video monitor. Telemedicine has been around for 40 years, but in the past was used primarily by the military, and mostly for communication between healthcare practitioners. 1 Ehley, Brianna. “Why telemedicine is the future of the healthcare industry.” 23 April 2014. The Week. 2 August 2014. http://theweek.com/article/index/260330/why-telemedicine-is-the-future-of-the-health-care-industry Clinics in remote places like Afghanistan would, for instance, send high-resolution images of soldier injuries to doctors in the United States via satellite technology, and would then have remote consultations with those doctors or even get their guidance in performing surgeries.

Now, though, with computers and mobile technology easily available, telemedicine has taken a new turn. The military still relies on telemedicine, but now soldiers in Afghanistan can meet with their doctors in the United States via technology similar to Skype. And since mobile phones are available throughout the world to people of all income levels, the same scenario is becoming available to patients outside of the military, particularly those in far-flung rural areas or those who can’t travel, allowing them to be diagnosed, treated, and followed from their home location. For instance, patients suffering from mental health issues now can simply dial in to see the psychotherapist, instead of traveling to the office to spend time on the couch. The psychotherapist, in turn, can monitor patient mood by text messages or new software applications.

Even diagnostic tests and patient monitoring can be conducted remotely. New technologies, for instance, allow patients to monitor their own vital signs using a cell phone app that automatically transmits the information to the physician. For bedridden patients, there are “Transportable Exam Stations” that can be ordered from a company called Global Med.2 http://www.globalmed.com/additional-resources/services-provided-to-bed-ridden-patients.php The station allows these patients to see their doctor without leaving home. It comes complete with a “tablet PC, speaker, microphone and an array of cameras and peripherals” so that a remote doctor can see the patient, diagnose problems, and communicate with him or her.

In the past few years, telemedicine has increasingly been moving into mainstream medical offices, and it’s now poised to become the next big thing-and not just in rural areas. Given that 60 percent of physicians see upwards of 20 patients a day and that the average physician caseload is 2300 (or 3000 in clinic settings) and that healthcare costs have been spiraling out of control, telemedicine looks like a good solution.3 Bernstein, Lenny. “How many patients should your doctor see each day?” 22 May 2014. The Washington Post. 2 August 2014. http://www.washingtonpost.com/news/to-your-health/wp/2014/05/22/how-many-patients-should-your-doctor-see-each-day/ It turns out that, as with so many things since the Industrial Revolution, medicine can be made cheaper and more efficient by removing direct human contact from the mix–or at least substantially reducing it. A study by the Affiliated Workers Association concluded that as many as 70% of all doctors’ visits could easily be handled by telephone. Doctors could see even more patients using telemedicine, and patients wouldn’t have to take off as much time from work for their appointments–in other words, telemedicine is good for the bottom line on several counts. That’s probably why most insurance companies now reimburse at least some telemedicine costs. Last year, more than 10 million people in the US received care via telemedicine, and projections show that number should double within the next two years.4 Westlake, Stephan. “Telemedicine: The Future of Healthcare Is Now.” 28 March 2014. Consumer Eagle. 2 August 2014. http://www.consumereagle.com/2014/03/28/telemedicine-the-future-of-healthcare-is-now/.

In fact, private companies have been springing up to offer telemedicine to consumers who simply hate going to the doctor. American Well5 http://www.americanwell.com/ is one such company. If you want to “see” an American Well doctor or specialist without leaving home, you download the Skype-like software to your computer or mobile device, provide basic health information and a description of your symptoms, choose from a list of board-certified providers, and then have a 10-minute live consultation with your chosen physician, all for $49. Your insurance may or may not cover it, but the cost certainly is more manageable than an office visit out-of-pocket. You can add more time if you need to, and the doctor can write prescriptions for you if it comes to that.

Telemedicine provides a few clear advantages to consumers, at least according to the American Well video.6 http://www.youtube.com/watch?v=mO27wtvQRyo Patients can avoid the inconvenience of traveling to the doctor’s office and the discomfort of long waits where they’re exposed to other patient’s germs. The system makes it possible for patients to be treated by any doctor or specialist anywhere in US, which certainly could raise the standard of care for those living in areas with poor medical options. One key problem for now is that a physician at Johns Hopkins Hospital in Baltimore, Maryland, probably isn’t licensed to practice outside of Maryland. Doctors usually have licenses that cover only their home states. The Federation of State Medical Boards currently is working on new guidelines to address such issues.

According to Dr. Roy Schoenberg, director of American Well, “There are things you can’t do with telemedicine. Obviously, you can’t be handling heart attacks through telemedicine, and you are not going to perform surgery through an iPad.”

That’s an interesting statement from a telemedicine specialist, because in fact, there already are practitioners conducting surgeries via telemedicine.7 Kay, Sharon. “Light Speed.” PBS. 2 August 2014. http://www.pbs.org/wnet/innovation/episode7_essay1.html Sitting at a console, a physician can direct a robot in a remote location to conduct an operation. The patient still needs to check into the hospital for the ancillary care, but the surgeon can be located anywhere. While remote surgeries are rather unusual still, they, too, will become far more commonplace in the next few years.

A more spot-on statement by Dr. Schoenberg sums up the current state of telemedicine: “What telemedicine does is it stretches healthcare all the way to where the patients are. It makes live healthcare available to consumers on demand, wherever they are. Telemedicine is going to rewrite how Americans get their healthcare.”

And there’s one final question left open for debate. While it’s true that many doctor visits are unnecessary and can easily be covered through remote consultations, how much does the loss of direct personal contact with your physician and the direct exchange of personal “energy” with your physician matter to the healing process–even if it’s only a placebo effect? Well, since telemedicine is going mainstream, we’re about to find out.