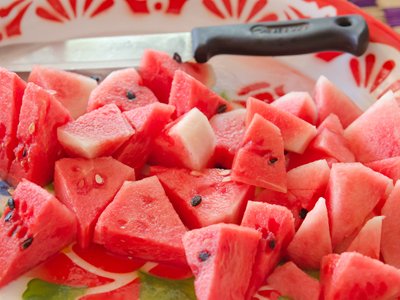 Watermelon is a popular warm weather treat. Refreshing and delicious, it’s no wonder that it is a staple at barbecues, picnics, and dessert tables all throughout the spring and summer. Not only is watermelon very tasty, but it is a healthy natural treat. And now, new research has found another good reason to eat watermelon on a regular basis: It appears to be able to substantially lower blood pressure.

The study, which was conducted at Florida State University in Tallahassee, found that people who are overweight and have hypertension might be able to improve their blood pressure levels by consuming more watermelon.1 “Chowing down on watermelon could lower blood pressure, study suggests.” Science Daily. 3 April 2014. Accessed 6 April 2014. http://www.sciencedaily.com/releases/2014/04/140403095457.htm The subjects were 13 middle-aged men and women who were obese and had also been diagnosed with high blood pressure. The participants were randomly separated into two groups. One group was provided a daily dose of four grams of L-citrulline and two grams of L-arginine–natural amino acids sourced from watermelon extract–for six weeks, while the other group took a placebo instead. For the second six weeks of the 12-week experiment, the researchers had the supplement and placebo takers swap.

The scientists took blood pressure readings and measured heart rate and other signs of vascular health throughout the trial. While the members of a group were consuming the watermelon extract, those subjects were found to have notably lower aortic blood pressure and oxygen demand of the heart. And their blood pressure levels as well as cardiac stress levels were lower not only when the body was at rest, but also when the participants were impacted by environmental factors that typically raise the blood pressure.

For the purposes of the study, the researchers chose to simulate the effects of cold temperatures on the body. A 2013 study at the University of Antwerp in Belgium found that when temperatures were decreased by 50 degrees Fahrenheit (10 degrees Celsius), the risk of heart attack increased by seven percent.2 Claeys, Marc. “Cold weather produces more heart attacks.” European Society of Cardiology. 1 September 2013. Accessed 8 April 2014. http://www.escardio.org/about/press/press-releases/esc13-amsterdam/Pages/environmental-triggers-acute-myocardial-infarction-air-pollution.aspx Exposure to the cold may result in a jump in blood pressure, less circulation to the heart itself, and ultimately, a cardiac event. But people are not only affected by this change in cold weather months and northern climates. Any exposure to the cold–such as spending time in a heavily air conditioned room–can produce the same reaction.

Therefore, in the current experiment, the researchers chose this form of environmental stress on which to focus. So aside from checking all of the participants’ vital signs while they were in a comfortable resting state, they also tested them while the volunteers had one hand submerged in water that had been cooled to 39 degrees to encourage their bodies to react as if they were very cold. But in this instance as well as while they were at rest, the subjects taking the watermelon extract ended up with significantly lower blood pressure readings than did their counterparts taking a placebo. And to ensure that the results truly were derived from the watermelon, the scientists eliminated other influencing factors. Prior to the study beginning, the subjects had stopped using pharmaceutical blood pressure medications and were told to maintain their typical diet and exercise habits.

While these are some promising findings, we can’t base too many decisions on research that only included 13 middle-aged, obese individuals. Such a narrow scope makes the results more difficult to readily apply to the rest of the population. However, that being said, this is not the first evidence of the tremendous potential value of the consumption of watermelon. A 2012 study at Purdue University in West Lafayette, Indiana and the University of Kentucky in Lexington determined that watermelon juice helped mice gain 30 percent less weight, lower cholesterol by 50 percent, and reduce arterial plaque as compared to a control group not given watermelon.3 “Watermelon shown to boost heart health, control weight gain in mice.” Purdue University. 2 October 2012. Accessed 8 April 2014. http://www.purdue.edu/newsroom/releases/2012/Q4/watermelon-shown-to-boost-heart-health,-control-weight-gain-in-mice.html

So, if you are worried about hypertension, feel free to indulge in a big slice of watermelon. It is always nice when a natural food can protect us in the same manner as man-made medications, and without all the risks of side effects. When you start digging into that juicy watermelon, you just may be doing your heart a lot of good.