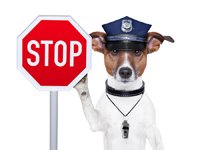 When we are dining out, it might be nice to have a little reminder about just how healthy or unhealthy a food or drink we’re considering really is.  Some items, like a double cheeseburger, milkshake, or fried chicken are pretty obviously going to be high in fat and calories.  But sometimes we can convince ourselves that other foods may not be so bad.  And as experience tells us, even when calorie counts and fat content are listed for particular foods, people often opt for that slice of pizza, cup of soda, or piece of cake — perhaps because numbers are too abstract.  However, when clear tagging with something more visceral than numbers is used to indicate the nutritional level of an item, it may very well help us out and make a difference in what people decide to eat.  According to new research, when a cafeteria used traffic light labeling of foods to denote a nutritional rating, customers made healthier choices.

The study, which was conducted at Massachusetts General Hospital in Boston, found that the application of green, yellow, or red labels made it evident to hospital cafeteria patrons which foods were more nutritionally sound than others and resulted in their purchasing more healthy options and fewer junk foods.1 “Labeling Food With ‘Stop’ or ‘Go’ Colors Might Spur Healthier Diet.” U.S. News & World Report. 7 January 2014. Accessed 13 January 2014. http://health.usnews.com/health-news/news/articles/2014/01/07/labeling-food-with-stop-or-go-colors-might-spur-healthier-diet   The experiment ran for two years in the cafeteria of Massachusetts General Hospital, and the subjects were the hospital visitors and many staff members who frequent it.  The red-tagged items–including sodas, pizzas, and high-calorie desserts–dropped in popularity over the course of the trial.

A baseline measurement was taken to determine the quantities of all of the items sold in the cafeteria at the outset of the research.  Within a few months the scientists noted a considerable drop off in red-tagged foods and an uptick in green-tagged choices.  At the six-month mark, the red-tagged purchases had decreased by 20 percent and the green-tagged purchases increased by 12 percent.  Even more significant was the finding in the beverage category, in which the consumption of sodas containing sugar plummeted by close to 40 percent.  What’s more, the changes in consumption did not eventually revert back to their previous levels.  The consumers stuck with making healthier choices throughout the remainder of the study.

Another change that was incorporated in the cafeteria for the purposes of the research was redesigning the displays of food items.  The green-labeled items were given prime eye-level placement, where they would be prominent and easy to spot.  The less healthy foods were a little less readily noticeable, and had to be sought out by customers.  This convenience-oriented type of redesign has been proven to work before.  In a 2012 study through Cornell University in Ithaca, New York, researchers found that high school students eating in their cafeteria purchased 18 percent more healthy foods and 28 percent fewer unhealthy foods after a makeover of the lunch line began featuring nutritious items front and center.2 Hanks, Andrew S.; et al. “Healthy convenience: nudging students toward healthier choices in the lunchroom.” Journal of Public Health. 31 January 2012. Accessed 14 January 2014. http://jpubhealth.oxfordjournals.org/content/early/2012/01/31/pubmed.fds003.full

While some earlier research has shown that putting the calorie and fat content of a dish next to its description on a menu does not typically discourage diners from eating it, there has been success when the labeling indicated how much exercise would be require to work it off–again, the power of visceral information as opposed to abstract numbers.  A 2012 study at Texas Christian University in Fort Worth found that when menus included information on the number of minutes of brisk walking it would take to work off the calories consumed for a food, much lighter fare was ordered by most patrons.3 James, Ashlei; et al. “The Effect of Menu Labels, Displaying Minutes of Brisk Walking Needed to Burn Food Calories, on Calories Ordered and Consumed in Young Adults.” The Journal of the Federation of American Societies for Experimental Biology. April 2013. Accessed 14 January 2014. http://www.fasebj.org/cgi/content/meeting_abstract/27/1_MeetingAbstracts/367.2 Think about this for a moment. What does it mean to someone when you tell them that one food is 200 calories and another is 400? On the other hand, when you tell them that one food takes half an hour of exercise to work off and the other takes an hour, that does means something. Now it seems that other not-so-subtle hints such as big red traffic light labels appear to serve as equally good reminders to help people eat better when they eat out. Who knows, over time it may help them develop better eating habits overall as they get used to all the positives of nutritious meals.

And it’s small changes such as these that can add up to a big difference over time.  Even if the only differences a customer makes is switching from French fries and a 20-ounce soda to a salad and water, that’s a savings of hundreds of calories per day.  Assuming the person is eating in the cafeteria five days a week during work, that adds up throughout the week and should result in weight loss over time, not to mention lowering the risk of diabetes, heart disease, cancer, and more.  Add a little bit of exercise to the daily routine and start incorporating these positive dietary changes to other meals throughout the day, and you will be on the road to a thinner, healthier way of life.